You are here: Home / Transport / German coach company refuses to accept it is breaking access laws 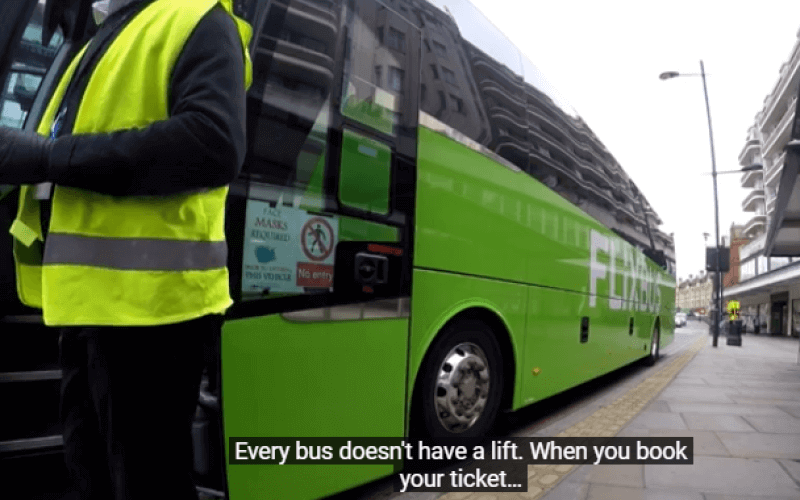 A German coach company that has just launched a service in England is refusing to accept that it is breaking the law by telling wheelchair-users to book tickets days in advance of their journey.

FlixBus is even facing the threat of a private criminal prosecution after it tried to run a coach that was inaccessible to wheelchair-users on one of its new routes.

FlixBus is Europe’s largest long-distance coach operator but only launched its services in England earlier this month.

As the country gradually began to come out of lockdown, accessible transport campaigner Doug Paulley decided to check on the accessibility of the new service-provider.

But it is a breach of criminal law to refuse wheelchair-users permission to “turn up and go” – without giving any notice – if there is a wheelchair space available on an accessible coach.

And from 1 January this year, all scheduled coach services in the UK must be accessible to wheelchair-users. It is a breach of criminal law to run an inaccessible coach on a scheduled service.

Paulley went ahead and booked a ticket costing just £1 from London to Birmingham last Thursday (16 July).

When the coach arrived (pictured), he was told he could not travel on it because the vehicle was not wheelchair-accessible.

He explained the law, and the driver agreed to call for an accessible coach.

More than an hour later, the replacement coach arrived.

This time the vehicle had a lift and was wheelchair-accessible, and Paulley was driven to Birmingham, with the inaccessible coach travelling with them in convoy.

He was the only passenger on board either of the coaches.

He has since discovered that FlixBus’s operator licence is currently “under consideration” by the Traffic Commissioners – a Department for Transport tribunal – even before its apparent breach of accessible transport laws.

Now Paulley plans to launch a private prosecution in the magistrates’ court against FlixBus for offering an inaccessible vehicle, as well as beginning a separate civil action.

He has been told by police that they will not investigate the incident because FlixBus provided an alternative vehicle that was accessible.

Paulley said: “It is supremely arrogant that this company appears to have started UK operations without any research into their access obligations.

“I intend on forcibly educating them.

“Perhaps they should implement the British standards in their European fleet, as it seems they are happy to run inaccessible vehicles and make disabled people book much longer in advance than non-disabled people.”

Two years ago, Paulley managed to persuade three national coach companies that were preventing wheelchair-users enjoying a “turn up and go” service to change their rules.

“DVSA has received a report about this operator’s booking process for wheelchairs, and about a linked incident where an alleged non-PSVAR* compliant vehicle was used on a scheduled coach service.

“Enquiries and investigations are ongoing into these matters. Any breach of the regulations found will be reported to the Traffic Commissioner for consideration.”

He added: “The DVSA welcomes reports of PSVAR non-compliance, and will ensure that in each case, the correct level of consideration, investigation and further action is taken.”

FlixBus – which brags on its website that its “green buses comply with the highest safety and environmental standards” – has so far refused to accept that the terms and conditions on its website are unlawful.

A FlixBus spokesperson claimed that this was only so it could confirm if the wheelchair-accessible spaces on the coach were available, even though a passenger carrying their wheelchair in the baggage compartment would not need to book a wheelchair space.

She was also unable to explain why it would take between seven and 14 days to check whether a wheelchair space was available on a particular service.

She said the company had started an investigation into how an inaccessible coach – in FlixBus livery – had arrived at the coach stop in London to pick up Paulley.

She said: “All coaches servicing our lines are PSVAR compliant. We have implemented double checks of this during the investigation.

“Passengers travelling in a wheelchair are of course, in accordance to UK law, welcome to board our coaches without notifying us in advance.

“We do kindly request them to inform us in advance to ensure that the wheelchair accessible seats are not occupied by other wheelchair users.”

But Paulley said: “It’s pure ableism and discrimination – they appear to be of the mindset that wheelchair-users should expect, accept and even be grateful for the ‘special care’ of booking days in advance.

“This is where Britain was 20 years ago, and it is shameful.”