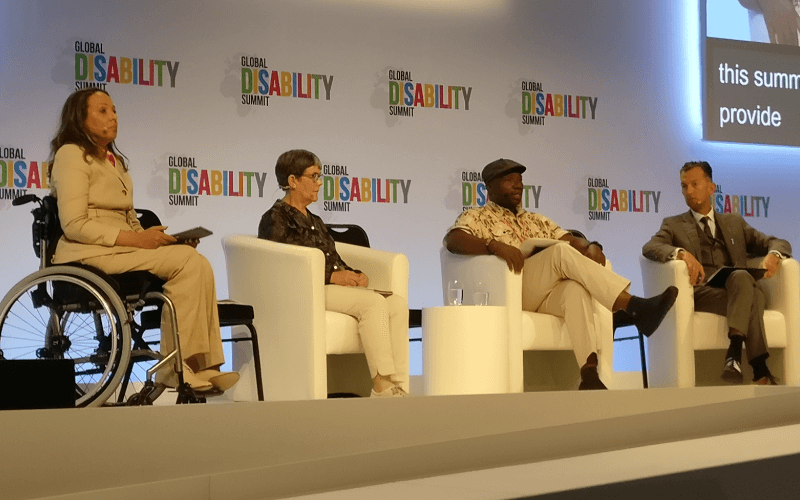 A national disabled people’s organisation is facing accusations that it “betrayed” the UK disability movement after its deputy chief executive failed to condemn the government’s record on rights at a major international gathering of disabled people.

Sue Bott was sharing the stage with a senior government civil servant less than a year after the chair of the UN’s committee on the rights of persons with disabilities (CRPD) said the UK government’s cuts to disabled people’s support had caused “a human catastrophe”.

They were appearing at the Civil Society Forum, an event headed by the International Disability Alliance and intended to “amplify” the voice of disabled people the day before the UK government’s sister event, the Global Disability Forum, was held in the same venue on the Olympic Park in east London.

Bott (second from left) was asked on Monday by the UN’s special rapporteur on the rights of disabled people, Catalina Aguilar, what she would like to ask the UK government to do.

But in front of an audience containing disabled people from organisations across the global south and the UK, Bott failed to criticise the UK government.

Instead, she laughed, and said DR UK wanted to “collaborate” and “learn from disabled people around the world”.

Hours earlier, Simone Aspis, from The Alliance for Inclusive Education, had won loud applause and even one or two cheers from the international audience after delivering a devastating attack on the government’s record on disability rights and its “hypocrisy” in holding the summit (see separate story).

CRPD told the UK government last September to make more than 80 improvements to how its laws and policies affect disabled people’s human rights, the highest number of recommendations it had ever produced in reviewing a country’s progress in implementing the UN Convention on the Rights of Persons with Disabilities.

Aspis had told the forum, which was organised by the UK government, the International Disability Alliance and the government of Kenya: “Today the UK government is asking other countries to sign up to a charter which talks about the importance of holding governments to account under the [UN convention] and yet our government stands in breach of it. Hypocrisy.”

And she said that UK disabled people’s organisations “absolutely welcome the giving of aid and support to our disabled brothers and sisters in other countries but we must also not let the UK government get away with its deliberate dismissal of its obligations under the [UN convention], because if one government should get away with it then others can follow.”

But instead of supporting Aspis by telling disabled delegates from across the world about the UK government’s serious breaches of the UN convention, Bott said: “We do want to work with government.

“As you heard this morning, we have some challenges in the UK but I believe that it’s essential that we keep that dialogue going with government and that we try to influence.”

She then said that DR UK’s request of the UK government was to “listen to us, talk to us, work with us and together if we work together we can create a society that is much better and inclusive for disabled people.

“It is a difficult process and sometimes unfortunately we end up going backwards sometimes but we need to engage and we need to find ways of going forwards and continuously improving our society for the benefit of disabled people.”

DR UK* has been repeatedly criticised for being too close to the government, but it appeared to have reclaimed some credibility with the disabled people’s movement through its part in a delegation of UK DPOs that visited Geneva last year, where its chief executive Kamran Mallick helped brief CRPD members on the UK’s breaches.

Last week, DR UK published a statement on its website criticising the government’s progress on disability rights, which it said had not just stalled but “reversed”, and adding: “We hope the summit will strengthen the ability of civic society in all the participating countries to hold their governments to account against the pledges they make.”

But when Bott took to the stage, sitting two seats down from Gerard Howe (pictured, far right), head of inclusive societies in the policy division of the UK’s Department for International Development (DfID), she failed to repeat that criticism.

The next day, Mallick spoke at the summit and also failed to criticise the government, noting only that he wanted the government to “see the UNCRPD report from 2017 as an opportunity to work through the issues raised and for the UK to reclaim its reputation as one of the leaders in disability equality”.

Eleanor Lisney, a leading disabled activist and member of the Reclaiming Our Futures Alliance network of disabled people and their organisations, said she was “astounded” by Bott’s speech.

She said: “Given that it was such a strong examination by the CRPD she didn’t mention it at all.

“It is not something that is hearsay. This is the UN.”

Lisney said: “She didn’t mention that, she didn’t give credit to DPOs in her own country, she said she wants to learn from the countries the UK government is giving help to.

There was also strong criticism on social media, with DPAC activist Rick Burgess saying on Twitter: “It is not acceptable for her to make no comment on UN report and to want to work with ongoing human rights abusers. Disgusting.”

Richard Rieser, who was at the forum and heard Bott’s speech, said it was “too weak” and that she had failed to challenge the UK government from the stage.

Rieser, a leading disabled consultant, who has played a key role in representing UK disabled people on international bodies such as the European Disability Forum and at the UN, said it had been “very difficult” to persuade DfID to let anyone from the UK disabled people’s movement to speak at the event.

And he praised Aspis for her speech, which had challenged the government.

He added: “People who were speaking were not just speaking for themselves and their own organisations but the whole UK disability movement and [DR UK] could have done more justice to the case against the British government domestically.”

He said Mallick had failed to explain to delegates what concerns the UN had raised “or in any way embarrass the government”.

Rieser said: “We have to be slightly stronger than that if we want to move them.

“We should really have held them to account more at this event. When you have the chance, you have to.”

Mallick and Bott refused to respond to requests from Disability News Service (DNS) to explain their failure to be more critical of the government from the stage.

Mallick said only in a statement: “Sue and I were asked to contribute to specific topics and questions, these were the basis of what we said.

“The panel that I was on was cut short significantly, due to the previous speech by the president of Ecuador running over time.”

He also referred DNS to a blog he wrote in advance of the summit, which was mildly critical of the government, a link to his speech to the summit, and to last week’s statement.