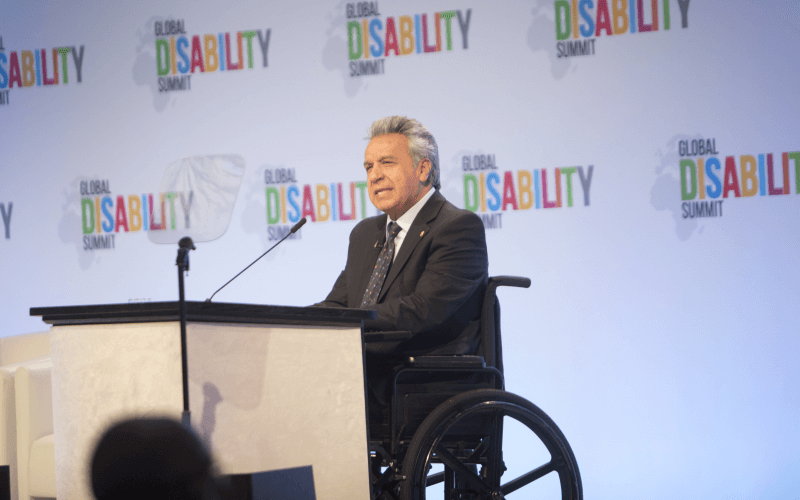 The disabled president of Ecuador has given a stirring speech in praise of the social model of disability, at a summit co-hosted in east London by the UK government.

President Lenin Moreno was one of the key-note speakers at the conference on the Olympic Park, which was hosted by the UK government, the International Disability Alliance and the Kenyan government.

Although he was described as the world’s only head of state with a disability – which is highly unlikely – Moreno (pictured) is thought to be the only one who uses a wheelchair.

The former UN special envoy told the Global Disability Summit in east London that he saw disability as “obstacles created by the environment” and coming from “structures and social conditioning”, and said it was “essential to place disability within the discourse of rights”.

Moreno became disabled after being shot in a robbery in 1998 and was elected president of Ecuador last year.

He told the summit how, after he became vice-president of Ecuador in 2007, he led on a sweeping series of policies – Ecuador Without Barriers – that aimed to transform life for disabled people in Ecuador.

This included the Solidarity Mission Manuela Espejo, an 18-month project to identify every disabled person in Ecuador – they found nearly 300,000 people with significant impairments and high support needs – and assess their needs.

The government reportedly increased the country’s spending on disability from about $100,000 a year to $65 million (another report described the increase as $2 million to $150 million) and reserved four per cent of jobs with significant employers for disabled people.

There were programmes to provide healthcare, assistive technology such as wheelchairs, canes, prosthetic limbs and hearings aids, and funding for local authorities to improve access to public buildings.

He spoke when he was vice-president of how on his visits around the country he had seen disabled people being hidden from view by their families in chicken coops and sheds.

He told the summit this week that disabled people had “been waiting for too long and they should not keep waiting, suffering abandonment, mistreatment and being hidden” and that Ecuador had needed a “cultural change” in the way it treated disabled people.

Moreno left government in 2013 at the end of his term as vice-president and was appointed as the special envoy on disability and accessibility by the UN’s secretary-general Ban Ki-moon, with the UN describing him then as “a globally acclaimed advocate for persons with disabilities and inclusive society”.

He told the summit that he had tried as the special envoy “to be a voice for millions of persons with disabilities” and to persuade every country to ratify – and then implement – the UN Convention on the Rights of Persons with Disabilities.

When he returned to government last year, he said, he found that much of his previous work on disability as vice-president “had been forgotten” and “all the things we had been fighting for and had built had been dismantled, forgotten or changed”.

This meant he had had to start again “nearly from scratch” after he was elected president.

Some opponents in Ecuador have accused him of turning his back on his socialist roots since his election.

In April, the Financial Times reported how Moreno had “announced a package of economic measures that aims to pare back the country’s bloated state apparatus and promote private enterprise, in a further departure from his socialist roots” and that he had “promised significant cuts to central government”.

A small group of protesters were outside the summit in east London to protest at his appearance at the summit.

One of the protesters, Mayra Crean, said Moreno had changed his policies since his election and was now applying a “neoliberal agenda”, cutting taxes for the rich and cutting spending.

She said: “He is cutting the budget for everybody – health, education, social care.”

And she said it was “an embarrassment” and “ironic” that he was appearing at the summit as a representative of disabled people.

He said: “Our objective now is all persons with disabilities who can and want to work should be able to do it. They have the right to work.”

He added: “Our objective is to become a society promoting full inclusion of persons with disabilities, where they can train, study, work, enjoy life, have fun.”

But he also pledged his commitment to working with disabled people on policies affecting them, telling the summit: “The historic model of those who drafted the [UN] convention, ‘nothing about us without us’, is at the heart of the principles of my government.”

And he reaffirmed his commitment to the social model of disability, telling the summit that his government’s objective was a “human rights-based policy and not medical based”.