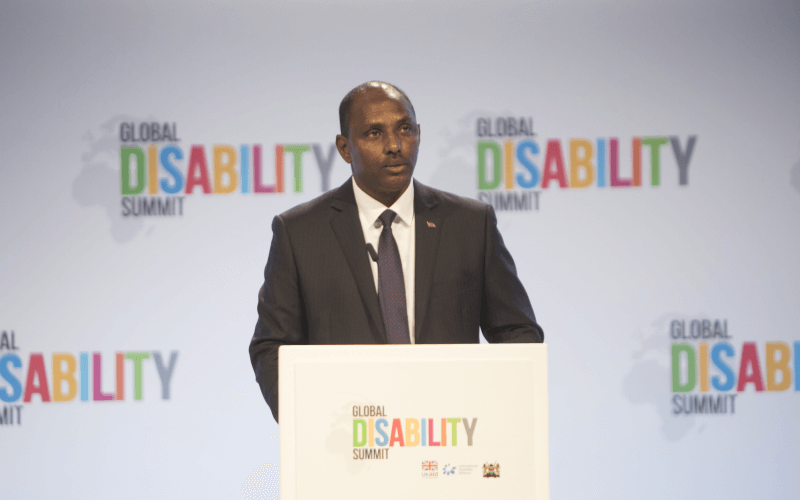 International development secretary Penny Mordaunt has defended the decision to co-host a major international summit on disability rights with Kenya, a country where it is illegal to be gay.

The UK government was co-hosting the Global Disability Summit in east London this week with Kenya and the International Disability Alliance, with Ukur Yatani Kanacho, the Kenyan government’s cabinet secretary for labour and social protection addressing the event (pictured).

Regard, a national organisation of disabled lesbians, gay men, bisexuals, transgender and queer people (LGBTQ), said it was “hard to imagine a less suitable partner” to co-host the summit than Kenya, apart from its neighbour, Uganda.

In a statement, Regard said: “LGBTQI+ people in Kenya are routinely banished from their families, denied work and accommodation, imprisoned and persecuted.”

The barriers they face to forming and maintaining relationships “results in widespread damage to their mental and physical health, creating impairments where none previously existed.”

Regard said this was reflected in the high level of asylum applications from LGBTQI+ asylum-seekers from African countries, and added: “Despite their experiences, the majority are then refused asylum in the UK and forcibly returned home, where many disappear or are murdered.

“The involvement of the government of Kenya discredits any debate that takes place at the summit.

“Whatever the political reasons for involving Kenya in co-hosting the summit, the rights and welfare of disabled people seem to have had very little to do with it.”

In April, Kenya’s president Uhuru Kenyatta said in an interview with CNN’s Christiane Amanpour that LGBT rights were “not important” to him.

He said: “I won’t engage in a subject that is of no importance to the people of Kenya.

“This is not an issue of human rights, this is an issue of our own base as a culture, as a people regardless of which community you come from.”

Disabled People Against Cuts has supported Regard’s concerns, and included them in an open letter to some of the most high-profile participants in the summit.

But when asked by Disability News Service how the UK government justified asking Kenya to co-host the summit, Penny Mordaunt, the international development secretary, defended the move.

She said: “We work with many organisations that don’t have the same values as we do. In part, that’s why we work with them.”

She said the UK government chose Kenya as a co-host because of its legislative record on disability; its early signing of the UN disability convention; and “thirdly and perhaps most importantly they are one of the best nations for their relationship and strength of civil society disabled people’s organisations”.

When asked whether the UK government also recognised Kenya’s appalling record on LGBT rights, she said: “We don’t work with perfect nations. That’s why we work with them.”