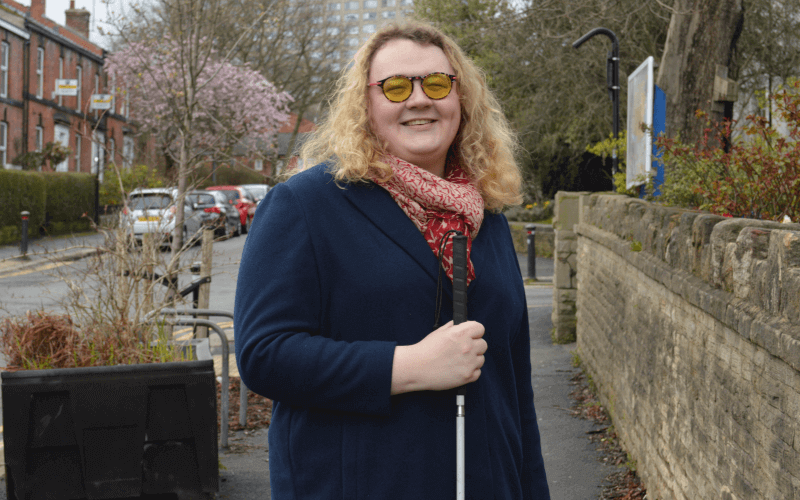 The government has blamed the coronavirus crisis for its decision to close a temporary fund that was set up to support disabled people with the extra costs of running for political office.

One disabled politician has described the permanent closure of the EnAble fund as a “kick in the teeth”, and accused the government of “locking disabled people out of politics”.

Only last month, the government announced a U-turn over the fund’s closure date and said it was being extended until the end of July to cover disabled people seeking election in May as police and crime commissioners (PCCs) and local councillors in England.

But after the elections were postponed until 2021, the Government Equalities Office (GEO) has now decided to scrap the fund altogether, and has only said it is “considering options” for future support for disabled candidates through the government’s national disability strategy, which is due to be published later this year.

Martha Foulds (pictured), who was due to stand for Sheffield City Council in May’s elections, was told of the closure decision last week by Disability Rights UK (DR UK), which had been administering the fund on behalf of the Local Government Association.

DR UK told her it had been passed the following message from GEO for applicants to the fund: “As the elections have now been postponed to 2021 we unfortunately are not able to continue with your application as the Fund will be closed down before they take place.

“The Government is considering options for future support for disabled candidates ahead of next year’s elections in connection with the National Strategy for Disabled People, which is due to be published later this year.”

Foulds told DNS that the fund would have allowed her to fight the election “on an equal footing” with her non-disabled political opponents.

She is visually-impaired and to fully participate in a campaign – knocking on doors and talking to people throughout her community – she needs support from a personal assistant.

Foulds found her way into politics through disability rights activism, fighting for accessible transport in South Yorkshire and campaigning against universal credit.

She said: “If the government forces me to fund support from personal assistants myself, they are breaching the provisions on participation in political public life outlined in article 29 of the UN Convention on the Rights of Persons with Disabilities.

“Disabled people are already woefully underrepresented in politics and closing the fund for good will put more people off politics at a time we need our voices to be even louder.”

She added: “It’s a real kick in the teeth and something that really angers me.

“The government are locking disabled people out of politics and it seems like they simply don’t care.”

DR UK said it was “not satisfied” with the government’s response.

A DR UK spokesperson said: “We have been informed by the Government Equalities Office that as they are only able to extend a contract by six months, they cannot extend the EnAble Fund as far as May 2021.

“We have challenged the decision to cancel the contract and asked them to review their rules about extensions.

“We have asked them to pledge that they will put something in place for next year’s local elections.

“However, they have only been able to advise us that the government is considering options for future support for disabled candidates ahead of next year’s elections, in connection with the National Strategy for Disabled People.

“We are not satisfied with the response from the Government Equalities Office – disabled people deserve more than ‘a consideration of options’.”

She added: “Disabled people seeking elected office need a permanent fund to assist in removing the barriers they face.

“We have already raised this issue with the Disability Unit, which is responsible for the strategy, and with the minister for disabled people.”

David Buxton, a Deaf Liberal Democrat candidate in the general election, said he was “bitterly disappointed” at the decision to close the fund, and the government’s failure to consult on the move with Deaf and disabled people.

Buxton had to raise thousands of pounds to cover the cost of sign language interpreters during his campaign, which he is hoping will be repaid from unspent EnAble funds.

He stressed the importance of a permanent fund to support disabled politicians with the disability-related costs of seeking elected office.

He said: “We should be proud, treated as equals with all other candidates, yet this is totally side-lining and dismissing us from the political world in which we can play a vital part which will benefit everyone.”

He called on ministers to invite him and other disabled politicians to a “frank, open and honest discussion” in a bid to find “positive solutions for a better future”.

A GEO spokesperson told DNS: “We have always been clear that the EnAble Fund was an interim measure.

“Financial support for candidates is a matter for political parties and we expect them to take action, but the government is also considering options for how it might support disabled candidates in the future.”

She said the fund was set up as an interim fund to cover scheduled elections between December 2018 and March 2020 and was then extended to cover the local council and PCC elections in May, which have now been postponed.

She added: “The government is considering options for how it might support candidates in the future in connection with the National Strategy for Disabled People.”

DNS revealed in February that successive chairs of the Conservative party had snubbed a request from their own equalities minister, who had asked them last year to explain how they intended to support more disabled people to become MPs and councillors.

Penny Mordaunt had told her party – as well as Labour, the Liberal Democrats and the Greens – that she believed “the provision of support for disabled candidates should ultimately be the responsibility of political parties”.

But she never received a detailed reply from any of the parties and her successors in the post – including Truss – failed to follow up her letter.

Mordaunt’s letter was written because the government has refused to set up a new permanent, long-term fund.

It scrapped the short-lived Access to Elected Office Fund (AEOF) in 2015 and eventually replaced it three years later with the temporary EnAble fund in response to a legal action taken by a trio of disabled politicians – including Buxton – who warned that the failure to reopen AEOF breached the Equality Act.