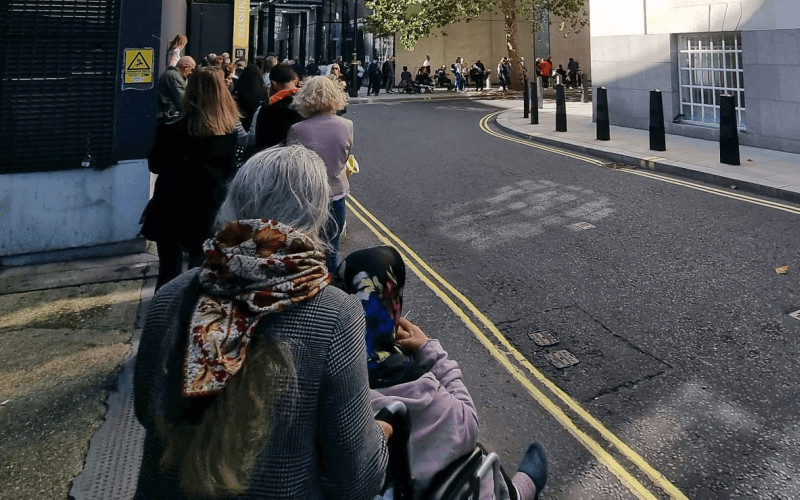 The government began planning an “accessible queue” for disabled people to pay their respects to the Queen at the lying-in-state more than a decade before she died, it claimed this week, despite the eventual arrangements deteriorating into “a shambles”.

The Department for Digital, Culture, Media and Sport (DCMS) has told Disability News Service (DNS) that planning for both the main queue and the accessible queue began “over 10 years ago”.

As many as 20,000 more people were admitted to the viewing through “separate access arrangements” that did not involve joining the two queues.

DCMS said it began consulting on its plans for an accessible queue in February this year, seven months before the death of Queen Elizabeth II.

It has released documents under the Freedom of Information Act which show that its plans were to provide up to 200 places per hour at the lying-in-state in Westminster Hall for disabled people with particular access needs, with 160 an hour coming from the accessible queue and another 40 disabled people from the main queue who needed step-free access.

But the documents also show that the government had planned to carry out “random checks of documentation” of disabled people in the accessible queue if demand for places threatened to outstrip the number available.

Disabled people who struggled to queue to pay their respects to the Queen in Westminster Hall told DNS in September how the government had treated them as an “afterthought” and that its “discriminatory” arrangements had been “a shambles”.

Many disabled people travelled from across the country to reach the Tate Britain art gallery in central London, where they queued for hours for a wristband that only allowed them to join the “accessible queue” to view the Queen’s coffin hours later, and sometimes not until the following day.

By the weekend, disabled people were reporting having to queue for up to eight hours (pictured) just to obtain a wristband.

They then faced another wait before they could join the accessible queue to enter Westminster Hall at the allocated time.

There was also anger and frustration when the accessible queue was closed permanently at 4.30pm on Saturday, more than a day before the main queue was closed to new arrivals on Sunday evening.

The arrangements meant many disabled people had to wait longer than the non-disabled people who were waiting to pay their respects in the main queue that started miles away on the other side of the Thames.

The documents released to DNS show that the government knew disabled people could face discrimination with the queueing arrangements for the lying-in-state, and that DCMS had set out plans to “mitigate” against the possible discrimination and “advance equality of opportunity”.

They also show that the government had consulted the disabled people’s organisation Disability Rights UK (DR UK) and the disability charity Leonard Cheshire.

An equality impact assessment of the plans states that DR UK and Leonard Cheshire provided advice on what documents would be “appropriate to suggest that people bring, which may deter those who are able to queue from trying to ‘jump’ the process and therefore deny someone with a genuine requirement to have a place”.

But DR UK made it clear this week that it told the government it should not require disabled people to bring such documentary proof.

Instead, it suggested a list of documents that could be considered if the government insisted that it wanted to introduce checks for those in the accessible queue.

Kamran Mallick, DR UK’s chief executive, said: “We don’t think that asking disabled people to prove they have a disability is the right approach, but we provided the list because they wanted to use it as a deterrent.

“The plan to allow individuals to book a space and come back at a later time was a good one, and should have been extended to allow you to do so online.

“This would have helped people not having to remain in the area for extended periods of time.”

He added: “The government with its years of planning should have known that numbers were going to be high and suitable arrangements should have been in place.”

He said the problems that occurred over the weekend showed that not enough provision was made for disabled people but did not show there was misuse of the accessible queue.

He said: “There should have been learning from when the Queen Mother died in terms of numbers and requirements.”

An estimated 200,000 paid their respects to the Queen Mother in Westminster Hall after she died in 2002.

Leonard Cheshire said it had begun engaging with the government on the accessible queue in early summer.

The charity said it was difficult to gain a complete picture of disabled people’s experiences of the accessible queue, but a spokesperson said: “We know that not all of our recommendations were implemented, so it would have been beneficial to have engaged with disability charities and disabled people’s user-led organisations earlier on in order to plan successfully.

“Ultimately, the scale and attendance of the queue was unprecedented, but earlier planning may have helped address some of the accessibility concerns that were raised.”

She said Leonard Cheshire had “actively discouraged” DCMS from asking for any evidence of disability “as this could be challenged legally”.

She said: “Not every disabled person has a blue badge, claims benefits, wears a lanyard, or has other ‘proof’, therefore asking for it and then preventing people from using the accessible queue if they don’t have it, risks discrimination and a failure to make reasonable adjustments.

“Furthermore, any disabled people attending without ‘proof’ would likely have been turned away and prevented from visiting at all.” 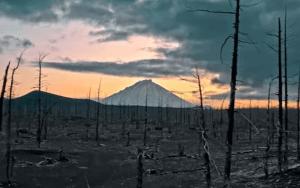