You are here: Home / Human Rights / Hard Brexit ‘will open up bigger disability rights gap’ than a softer EU exit 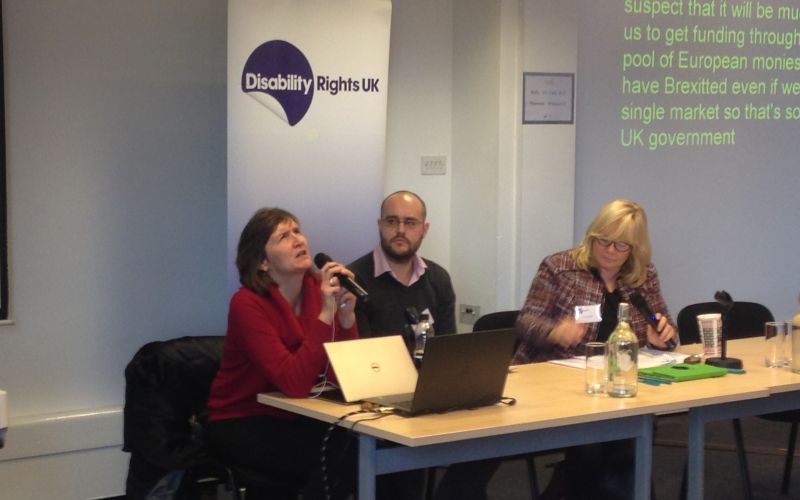 Disabled people must push the government hard as it negotiates its withdrawal from the European Union (EU), because the terms of the Brexit deal are likely to have a significant impact on disability rights in the UK, according to a leading academic.

Professor Anna Lawson, head of the Centre for Disability Studies and the new Disability Law Hub at the University of Leeds, said that a so-called “hard Brexit” – in which the UK withdraws from the EU single market as well as political union – was likely to damage the rights of disabled people in this country more than a deal that allowed the UK to stay in the EU single market.

She told Disability Rights UK’s annual conference in north London that disabled people and their organisations would need to pressure the UK government to explain how it would fill the “disability gap” between the rights that are currently in place and those that will exist after Brexit.

Lawson (pictured, speaking to the conference) said that a “soft” Brexit would mean the UK staying in the EU single market, and therefore benefiting from all the legal protections that offers, such as laws on assistance with public transport and non-discrimination.

She said: “So many of the disability-related rights and policies conferred by EU law will continue to be binding on the UK if we remain part of the single market.”

But leaving the single market would mean that disabled people would have to pressure the government to fill in more gaps in protection currently offered by EU membership, such as in procurement law, and disabled passengers’ rights when travelling on planes or ships.

The EU has also agreed new laws on public sector website accessibility, and has proposed a new European Accessibility Act.

Lawson said the benefits of the accessibility act could “trickle down” to disabled people in the UK even if there is a hard Brexit, because designers and manufacturers in the other countries in the single market would be bound by it.

Leaving the single market would also mean the loss of freedom of movement, which would affect disabled people’s ability to recruit personal assistants from EU countries, and the recruitment of NHS staff.

But Lawson said that even if there was a hard Brexit, the EU was likely to continue to influence disability rights in the UK, with campaigners able to use any EU legislative improvements as a bargaining tool domestically.

She said: “The bigger question is what does the UK need to do to fill any disability gap that would open up.

“There will be a much bigger gap if we leave the single market.”

She also pointed to EU funding that has been awarded to disabled people’s organisations (DPOs), and added: “We need to make sure disabled people do not suffer because the funding isn’t available to DPOs [after Brexit].”

She said it was important to ensure that any replacement funding from the UK government had the same requirements for accessibility and non-discrimination as EU funding.

Lawson said it would be vital to assess which disability-related rights would be affected by Brexit, so disabled people know “what is at stake and what is the size of the gap”.

She said Disability Rights UK was surveying disabled people, DPOs and voluntary organisations to ask them how much EU funding they have received and the kind of projects it has funded, in a bid to “use that to influence the UK in terms of what it needs to be thinking of in the coming years”.

Lawson also appealed to DPOs to continue to be involved in dialogue and collaborations with other DPOs across Europe.

She said: “This matters, because what happens at EU level is still going to be a really influential bargaining tool for us with the UK government.

“If much stronger disability rights protections are developed at EU level, even after we have left, we can use that as bargaining tools with the UK government.”

Lawson also warned that the government’s threat to quit the European Convention on Human Rights (ECHR), and replace it with a British bill of rights – unconnected to Brexit – was “something we as disabled people would need to campaign very hard against”.