You are here: Home / Transport / Industry and government fight over blame for damage to ‘turn up and go’ rail rights 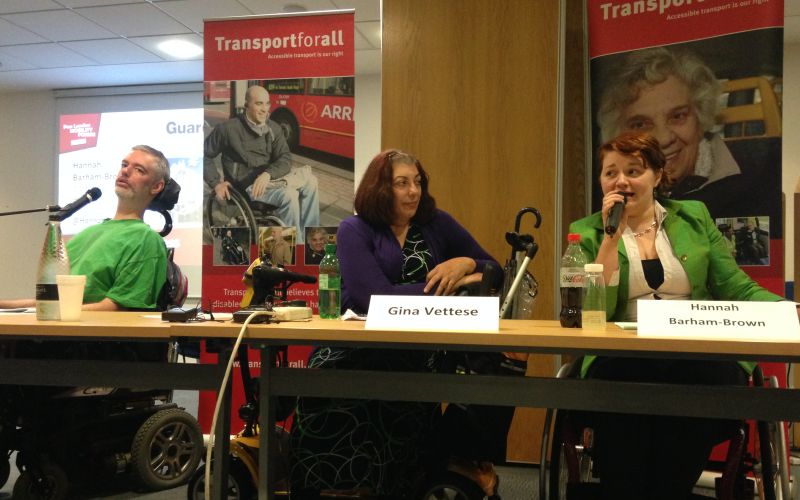 Staffing cuts across the rail industry – forced on train companies by the government – are damaging the rights of disabled passengers to catch trains without having to book assistance in advance, according to campaigners.

The user-led accessible transport charity Transport for All (TfA) said the Department for Transport (DfT) was embedding such cuts in rail franchise agreements with train companies, making it even harder for disabled and older people who need assistance to board and disembark trains to travel “spontaneously”.

Two representatives of the rail industry appeared to agree that the government was to blame and had forced the staffing cuts on train-operating companies – affecting station and on-board staff – although one of them later appeared to backtrack on that claim.

She said that train operating companies were “making very handsome profits for their shareholders”, while the government was failing to answer questions “straightforwardly” about the need for “turn up and go”.

She said the train industry needed to “stop treating disabled passengers as second-class citizens”, while transport ministers “really need to stop being so intransigent and face reality”.

He said: “It is a really big problem that we need to raise the awareness of and tackle.”

Michael Adlington, customer experience manager for accessibility and inclusion for the Rail Delivery Group (RDG) – whose members run the rail industry – said it was DfT that decided how many staff train operating companies could employ.

When asked after the meeting to confirm that the government set staffing levels through the franchising process, Adlington told Disability News Service (DNS): “That’s what I believe, but the DfT would need to confirm it.”

He then added: “I perhaps said too much, if I am honest, because I don’t know.”

Veronika Krcalova, stakeholder support manager for South West Trains, also appeared to suggest that it was the government that decided how many staff a train operating company could employ.

She told the forum: “At the moment, we have a guard on every one of our trains.

“We want to keep them, but that is not up to us to decide.”

After the forum meeting, DfT denied that it specified staffing levels in franchise agreements, and said instead that it was “a matter for the train operator to ensure that services operate safely and in compliance with legal and regulatory requirements”, while all train companies have to comply with the Equality Act.

The forum heard that London’s Euston station has already warned disabled people that if they want assistance to board trains over Christmas it is “highly recommended” to book it in advance, said Benson.

He told the forum that this was “shocking” for a station the size of Euston.

TfA activist Gina Vettese (pictured, centre), a scooter-user, told the forum: “We have to keep guards on these trains, otherwise there will be no-one to help us on and off.

“It is a total lack of common sense.”

Hannah Barham-Brown (pictured, right), a junior doctor, blogger and wheelchair-user, from south London, told the forum about the ordeal she had repeatedly faced as she tried to travel to work at Kingston Hospital by train.

She was unable to book assistance home because she could not predict what time she would finish her shift every day.

She experienced so many “horrific journeys” caused by the failure of assistance to help her on and off trains that she admitted defeat and paid for a car instead.

She said: “I would like to know that I am valued as much as any other customer, but I don’t think that is [true] most of the time.”

Much of the discussion about “turn up and go” at the forum involved Southern, which is embroiled in a long-running industrial dispute over plans that will see more of its trains driver-only operated (DOO), with no other member of staff on board.

Emily Yates, co-founder of the Association of British Commuters (ABC), said her organisation had been told by lawyers that DOO trains that visited unstaffed stations would breach the Equality Act if a disabled passenger was unable to secure assistance at those stations.

She said it was not clear whether train operating companies or DfT would decide to prevent this happening.

She said: “Will there be a call made on that decision or will it take us crowdfunding [to pay for a court case] to make it happen?”

Adlington told her: “I honestly don’t know. It is horrible to think that a customer or group of customers like yourselves would have to club together to do something.

“We have been talking to DfT. It is very much in their domain as to what happens.”

He said the rail industry was only able to work within “parameters” set by the government, although “we can fight against it if we think it is wrong”.

But Yates said: “In 2016, are we [really] having this discussion about whether disabled people have the right to turn up and travel?

“The government are clearly saying, no, they don’t.”

She said that attempts by Southern to “normalise” the inability of disabled passengers to “turn up and go” rather than trying to address the problem were “unlawful and immoral and unacceptable”.

Charles King, chair of Croydon Mobility Forum, said the staffing situation on the railways was “absolutely appalling”, with DfT deciding how many staff train operating companies employ, leading to trains regularly skipping station stops because there were not enough staff on duty.

When this happens, disabled people are “120th in the queue” for a taxi to get back to their home station, he said, and then “120th in the next queue” because the first taxi was not accessible.

Adlington also told the meeting that RDG was now at the “early stages” of working with DfT to “put in some minimum standards of rail accessibility”.

He said later that this work, which aims to produce common minimum standards on accessibility, was “at the very, very early stages”, although the department had been “receptive” to the idea.

DfT told DNS after the forum that there already were minimum standards of accessibility, which it expected the industry to meet when designing and building stations and trains.

But the department said that RSSB, the industry-owned safety and standards body, was developing accessibility guidance for train operators, and that this “may inform on future DfT franchise specification”.

DfT said that DOO had been “operating safely for more than 30 years on a third of the UK rail network”, but it has yet to explain how increasing the use of DOO would not make it harder for disabled people to travel independently, particularly to and from unstaffed stations.

Meanwhile, Transport for All is planning to launch a campaign in the new year, with a series of demands around access to rail travel for disabled people.

It will demand that “disabled and older people have the same right to travel as any other member of the public”, and it will push for “proper turn up and go”, and for action on rail staffing levels.

Among other demands, it will call on the government to reject recommendations from the chair of Network Rail to delay nearly £50 million already allocated to the Access for All rail station access improvement scheme.