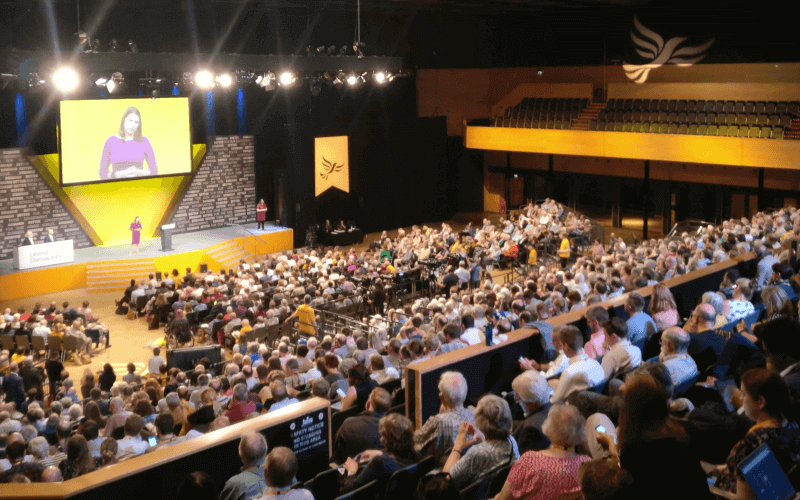 The Liberal Democrats have ruled out scrapping universal credit (UC) if they win power at the next general election, but they have agreed to scrap all benefit sanctions.

At their annual conference in Bournemouth this week (pictured), members overwhelmingly endorsed the party’s new policy paper, A Fairer Share For All.

The party says it would “abolish the benefits sanctions system entirely” and replace it with a system of incentives, a policy which currently goes further than Labour, which so far has promised only to scrap the “punitive sanctions regime” and not all sanctions.

It came as reports suggested that Labour was considering scrapping UC if it wins power at the next general election, with the issue almost certain to be discussed at the party conference in Brighton, which starts on Saturday.

A report on UC in June, by Disabled People Against Cuts, contained “harrowing stories of people forced into debt, rent arrears, homelessness, crime, prostitution, hunger, people unable to afford fares to get to food banks, parents unable to get essentials for their babies, child poverty, worsening mental health, ex-service people considering suicide and even cases of actual suicide”.

Disabled activists have repeatedly warned that UC is “toxic” and “rotten to the core”, with “soaring” rates of sanctions and foodbank use in areas where it has been introduced, and repeated warnings about its impact on disabled people.

The Liberal Democrats say they would reduce the much-criticised five-week wait for claimants to receive their first UC payment to just five days, while there would be an investment of at least £5 billion in improving the benefit system.

But the policy paper, which together with a motion approved by members this week is now Liberal Democrat policy, ruled out the idea of scrapping UC, which was introduced under the Tory-led coalition with the Liberal Democrats.

It argues that “scrapping it and starting again when millions of people have now moved to the new system is impractical and would see more money spent again on administration rather than supporting people”.

Instead, a Liberal Democrat government would aim to “fix existing problems and construct a new benefits system which provides dignity and respect”.

It would also abolish the bedroom tax and offer instead “a positive incentive for people to downsize” their accommodation.

The paper does not explicitly repeat the party’s pledge made at the last election to scrap the much-criticised work capability assessment (WCA), a process which has been linked to countless deaths of disabled people.

Instead, the party says it will bring the WCA “in-house” and ensure it is carried out “fairly and in a sensitive manner”.

But a party spokesman insisted that the policy had not changed and that the Liberal Democrats still wanted to see assessments “performed by the government in a fair and sensitive manner”.

This means scrapping WCAs and “replacing them with locally administered assessment”, he said, which would include “real world tests, so that people are assessed on their ability to do jobs that are available locally”.

Although the policy paper rules out introducing a universal basic income – which Labour has been considering – it says a Liberal Democrat government would pilot a scheme that offered a “guaranteed minimum income” through an “unconditional payment” of the standard UC allowance (currently £318 per month for a single adult over 24).

But Michael Berwick-Gooding told fellow party members during a debate on the new policy that they should “demand better”, including reintroducing the council tax benefit scheme and doing more to restore benefit levels that have been restricted by years of caps and freezes.

Another speaker, Cllr Dean Crofts, a Liberal Democrat councillor in Bedford, said the new policy just “tinkers with the welfare system”, which had already been “tinkered with for too long”.

He criticised the motion for failing to do more to highlight the poverty affecting disabled people, which he said was the group most affected by the government’s welfare reforms.

Ewan Hoyle, a party member from Glasgow who works in deprived communities in the city and who supported the motion, warned of the “dreadful” consequences of benefit sanctions.

He said: “The money given to benefit recipients doesn’t just vanish, it gets immediately recycled into the community within hours of its receipt.

“Every sanction, every five-week delay, is a crack in the fabric of that community.

“When you have no income and no means to feed your children, or heat your home, is it easy to turn away a drug dealer, a loan shark, a pimp, and the income they offer?

“Sanctions are a means to punish people the Daily Mail doesn’t like… I think society is ready for a change.”

He added: “With this motion we are for the many, we are for the few… and we are also for the other few that don’t fit into Labour’s ideal of the worker.

“We are for the depressed, the anxious, the psychotic, the sick, the addicted, the traumatised, the downright unlucky, who haven’t had their break.

Linda Jack, who will fight the Luton South seat for the party at the next general election, won applause from some party members when she said the Liberal Democrats could not “completely wipe out our responsibility in terms of some of the changes in the benefits system that came about when we were in coalition”.

She said: “We did not make mistakes, we made choices.

“If we really want to get our credibility back and we want to be seen to be honest in this motion we absolutely have to acknowledge those mistakes, stop justifying them, and start apologising.”

Former party leader Tim Farron, the MP for Westmorland and Lonsdale, who moved the motion, said he wanted the country to have “zero tolerance of poverty”, which meant “having a benefit system that works”.

He described the “disgraceful” treatment received by a constituent who had both physical and mental health impairments, and who was rarely able to leave her bed.

He said that the effort she made to reach her WCA was “absolutely heroic”, while she had cried with pain during most of the face-to-face interview.

But the assessor found her fit for work, even though she weighed just five stone, and wrote in the assessment report that she looked healthy and must be fit to work because she had managed to catch a bus to get to the assessment.

Farron said: “I could read a couple of hundred cases like that in Westmorland alone because we have a broken system that breaks those who already feel beaten.

“This is shameful, and it must end, so we will end the contracting out of work assessments and take responsibility back within government.

“Those in need must be treated with dignity, not contempt. We need a benefit system that helps, not hinders; that brings dignity, not destitution.”

One party member spoke in the same debate of a disabled friend whose Motability car was his “lifeline”, but who had had it taken away after a personal independence payment reassessment led to his mobility payment being cut.

After losing his car, he became unable to leave the house, and became depressed and highly anxious, and although he later won his appeal, he died following a heart attack before he could lease a new Motability vehicle.