You are here: Home / Activism and Campaigning / Maximus will face nationwide protests on first day as ‘fitness for work’ provider 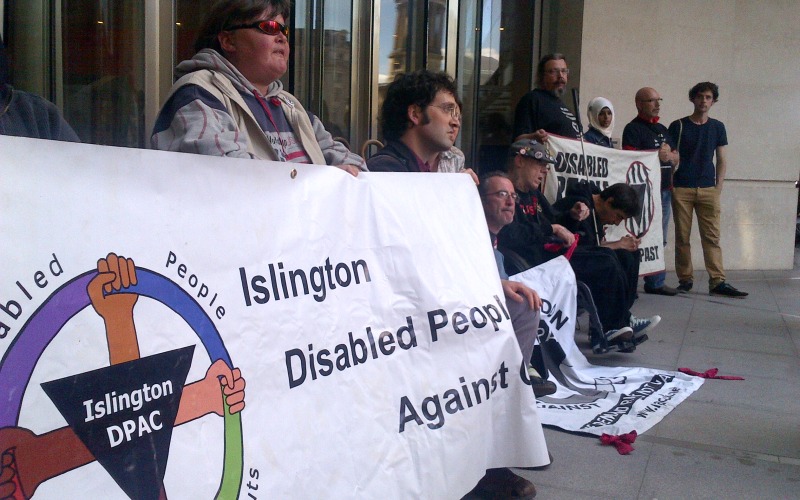 The controversial new provider of the government’s “fitness for work” test will be greeted with protests in more than 25 towns and cities across England, Scotland and Wales as it starts to deliver assessments for the first time.

The day of action will take place outside assessment centres on Monday (2 March) and is being led by the disabled people’s campaigning organisation Disabled People Against Cuts (DPAC) with support from fellow user-led groups Black Triangle, the Mental Health Resistance Network and New Approach, and the mainstream grassroots group UK Uncut.

The five groups say that the replacement of the much-criticised provider Atos Healthcare with the US outsourcing giant Maximus will make no difference to the disabled people who undergo assessments.

They said that the assessments continue to “baffle medical science, ignore centuries of barriers, fly in the face of irrefutable evidence, dismiss the experience of millions of disabled people, and, most importantly of all, impoverish hundreds of thousands of people in the pursuit of ‘reducing welfare’ costs in the name of austerity”.

And they said that nearly 4.8 million assessments had been carried out since they were introduced by the last Labour government in 2008, with many disabled people subsequently forced onto unsuccessful employment support programmes such as the Work Programme.

Schemes that were successful in supporting disabled people to find work, such as disability living allowance, Access to Work and the Independent Living Fund, had been “decimated by cuts or abolished altogether”.

The five groups said that disabled people were being forced by the WCA process to “perform meaningless tricks for the entertainment of politicians and the Daily Mail-reading public”, in a “three-ringed circus” of the Department for Work and Pensions (DWP), Atos (and now Maximus) and Work Programme providers.

And they pointed to the “unsettling” background of Maximus, which has a lengthy record of discrimination, incompetence and alleged fraud in the US.

Fred Karno, from DPAC, said: “Changing one provider for another does nothing to address the core problems.

“The jobs market is completely inaccessible to most disabled people for a variety of reasons – lack of support, inaccessible work environments, discrimination.

“But this isn’t about getting people to work, or reducing the cost of social security – it’s about privatising the welfare state and lining the pockets for private companies.

“So what it won’t do is get people back into work – with over 100 people a day with a mental health diagnosis being sanctioned, you’re more likely to find yourself in a food bank than a job interview.

“We are asking all disabled people who have been affected by the WCA to join us on one of the demonstrations or online actions and support this day of action.”

One of the protests is to take place outside St Mary’s House in Norwich.

The last minister for disabled people, Mike Penning, promised last June that the government would stop using St Mary’s for assessments after he heard that disabled people from the Norwich area were being forced by the building’s access problems to make long journeys to alternative centres.

But St Mary’s House is still being used for assessments, three years after the problems were first drawn to the government’s attention, and nine months after Penning promised to close it. Now Maximus is set to start using it for assessments on Monday.

Disabled campaigners pushing for it to be closed say the current minister for disabled people, Conservative MP Mark Harper, has ignored their concerns and refused to answer their letters.

Mark Harrison, chief executive of Equal Lives, the Norfolk-based disabled people’s organisation that has led protests about St Mary’s House, said the decision to continue using the building “demonstrates the contempt this government has for disabled people”.

He said: “How can you appoint a new provider for the hated assessments and force them to use an inaccessible building which the DWP leases through another private sector provider, Telereal Trillium?

“There is one rule for disabled people and another for the private sector, bankers and ministers who see themselves as being unaccountable and above the law.”

A Maximus spokesman said: “People have a right to protest, of course. We would hope that they do not disrupt claimants going into assessments or the ability of our staff to carry out their jobs and duties.

“We recognise people’s right to protest. We see their messages. I would not necessarily say we go as far as to say we agree with them…”

Asked whether the company was taking any precautions in advance of the protests, he said: “Bearing in mind this has happened on a fairly regular basis under Atos, the whole system is used to it or has experienced dealing with protests and seeing protesters.

“Staff are advised just to be polite to the protesters if they speak to them and don’t let anyone into the building who does not have an appointment.”

He added later: “We were chosen to run this service because we are experts in helping people who use government healthcare and other social services programmes.

“There are many challenges that will take time to overcome, but we believe that we have the clinical expertise and fresh approach that, over time, will reduce waiting times, improve the quality of the service and deliver a better experience for people we assess.

“This is what we are focusing on.”

Maximus said it hoped the St Mary’s House problems would be resolved “soon”.

A DWP spokesman said: “We respect the right of anyone to protest outside assessment centres, but we ask that this is carried out in a peaceful manner and is not disruptive to the people attending the centres or employees.”

And he said the department was “currently looking at a number of options” for St Mary’s House, and would “make a decision as soon as we can”.

He said: “People who are unable to access the second floor will continue to be offered an assessment elsewhere or if necessary a home visit.”