You are here: Home / Independent Living / Minister invited 44 ‘leaders’ to care summit, but not one disabled people’s organisation 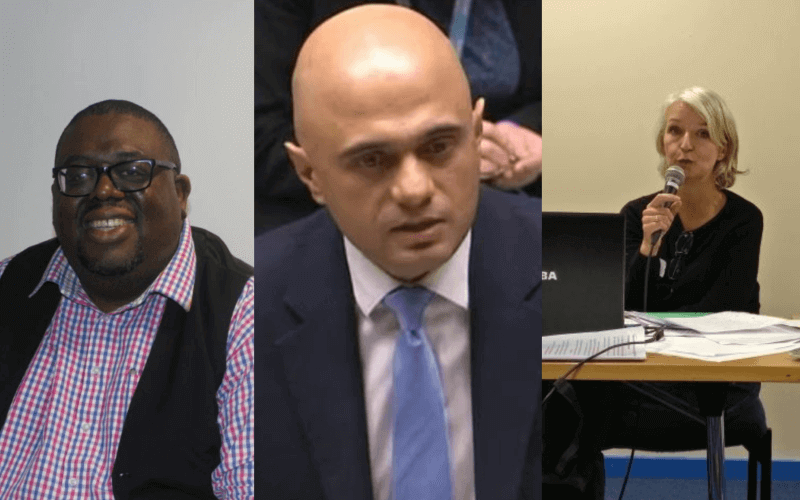 The government failed to invite a single representative of a disabled people’s organisation (DPO) to last month’s crucial health and social care reform “summit” meeting, an omission that has been branded “disgraceful” and “unacceptable” by campaigners.

One disabled campaigner said the failure of health and social care secretary Sajid Javid to invite any DPO to his health and care sector meeting represented “a new low” for the government on engagement with disabled people.

The failure emerged after Disability News Service (DNS) secured a list of the 44 “senior leaders and experts” who attended the summit hosted by Javid on 20 September.

The list of “attendees” shows just one service-user, Clenton Farquharson, chair of the cross-sector Think Local Act Personal partnership, which itself includes representatives of local and central government, the NHS, care providers and service-users.

But Farquharson has told DNS that he was only invited “at extremely short notice” and was actually unable to attend, even though the Department of Health and Social Care (DHSC) included him on the list sent to DNS as one of the “attendees”.

This means that the summit meeting did not hear from a single service-user or DPO.

The failure came despite Inclusion London and other DPOs writing to Javid in June asking to be involved in the government’s social care reform programme.

They were told he was too busy to meet them.

Two months later he snubbed them again by failing to invite any of them to the summit meeting.

The government’s latest failure appears to be another clear breach of its duty, under the UN Convention on the Rights of Persons with Disabilities (UNCRPD), to “closely consult with and actively involve” DPOs when developing laws and policies relating to disabled people.

And it comes only a week after DNS reported how the new care minister, Gillian Keegan, admitted she was completely unaware of disabled people’s criticism of the prime minister’s controversial social care reforms, and that she had “not looked specifically at the disability response” to the reforms.

Tracey Lazard, chief executive of Inclusion London, told DNS this week: “The failure to ensure any representation by disabled people and our organisations at this vital summit on social care marks a new low in this government’s already dismal record of engagement with DDPOs*.

“How can the government even begin to meet the challenge of transforming our broken social care system if it systematically excludes and disregards nearly half of all users of social care?”

She added: “This lack of engagement with disabled people and DDPOs is appalling.

“Not only does it fail to meet the UK’s obligations under the UNCRPD, but it makes no ethical or business sense.

“The government understands the importance of talking to businesses and listening to consumers, yet it fails to apply the same principles to disabled people.

“We appear not to be seen as equals by this government and as a result we will continue to experience ‘care’ as something that is done to us, rather than with us.”

Linda Burnip, co-founder of Disabled People Against Cuts (DPAC), said it was “disgraceful” that no DPO was involved in the summit “although sadly not at all surprising”, while she said it was clear that Farquharson had only been invited as an “afterthought”.

She said: “The concept of involving disabled people and their organisations in something as vital as this to our futures seems to fail to penetrate the Westminster mindset.”

Mark Harrison, a member of the steering group of the Reclaiming Our Futures Alliance (ROFA), said the failure to include even one DPO in the summit showed it was “business as usual for this government.

“Their contempt for disabled people has been clear over the last decade.

“Their refusal to establish meaningful engagement and consultation with DPOs also demonstrated their complete disregard for the UNCRPD.”

But Harrison said the other professional bodies and interest groups in the meeting were also at fault, as they apparently saw nothing wrong with “being in a room with government and discussing policies that affect disabled people without any representatives of DPOs in the room”.

He added: “ROFA calls on government to engage with us in a serious way to sort out the crisis in social care which is destroying so many lives.”

Farquharson said: “People with lived experience are ready and willing to engage positively with government at this key and crucial time for disability policy and social care reform.

“It’s not acceptable to hold meetings with sector leaders whilst excluding people with lived experience who can contribute their expert knowledge and skills.”

He added: “I call on ministers and the Department of Health and Social Care to commit to involving people with lived experience as part of their planning, not as an afterthought.”

Professor Peter Beresford, co-chair of the disabled people’s and service-user network Shaping Our Lives, said the failure to involve disabled people and DPOs in the summit was “another kick in the teeth for disabled people”, but not a surprise.

But he added: “Given the government’s appalling track record on disability it is difficult to see what would have been gained by any of us being a part of this window dressing.

“The new proposals for social care so far show no awareness of the importance of independent living and their only contribution seems to be to impose national insurance on older workers.

“Mounting conventional parliamentary action in relation to this government shows no serious signs of being listened too – just check out the worsening direction of travel of welfare reform.”

DHSC had not commented by noon today (Thursday).