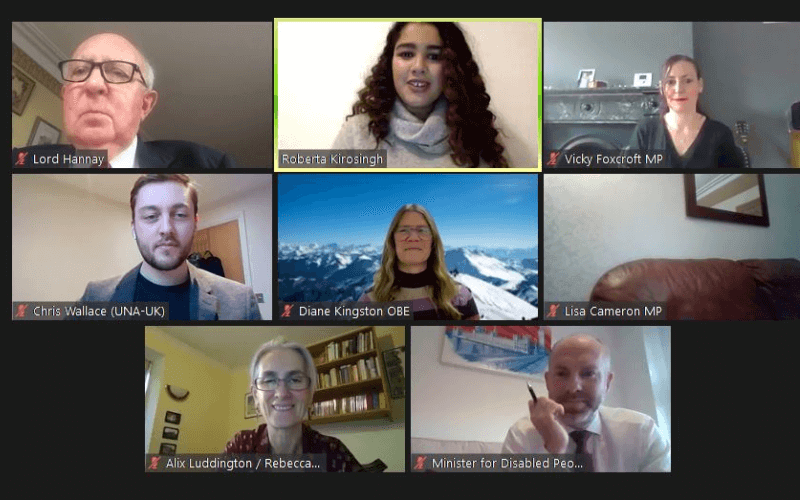 A minister has been told by a former member of the UN’s disability rights committee that the government must end its unacceptable opt-out from the duty to ensure inclusive education for disabled children under the UN disability convention.

The demand from Diane Kingston also received support from the chief executive of the Equality and Human Rights Commission (EHRC), Rebecca Hilsenrath.

Since the Labour government ratified the UN Convention on the Rights of Persons with Disabilities in 2009, successive Conservative-led governments have maintained a reservation against article 24.

This means the UK has reserved the right for disabled children to be educated outside their local community, while an “interpretive declaration” explains that the UK believes the convention allows it to continue to operate both mainstream and special schools.

Kingston (pictured, centre) and Hilsenrath (bottom left) were speaking at a joint meeting of the all party parliamentary group for disability (APPGD) and the United Nations all party parliamentary group, held to mark 25 years since the introduction of the Disability Discrimination Act, and attended by the minister for disabled people, Justin Tomlinson.

Kingston was the UK’s representative on the UN committee on the rights of persons with disabilities (CRPD) until December 2016.

She said the reservation was “just not acceptable” and “really needs to be removed”.

She said: “Every child with a disability must have the right to be educated as close to their home as possible in the mainstream with the right support.

“The millions and millions of pounds that are spent on segregated schooling for children with disabilities… we will never have a mainstream society if we don’t have mainstream schools.”

Hilsenrath noted a comment from Simone Aspis, from The Alliance for Inclusive Education, who also attended the APPGD meeting, that the “increasing numbers and expansion of segregated education” was “clearly in breach” of the government’s obligations under article 24 of the convention.

Hilsenrath said this was a “really important point to be flagged” and she said the UK was one of only two countries to have maintained a reservation under the UNCRPD.

She said: “We need people to start with the same educational opportunities as others or they are simply not going to achieve as much as others.

“This is a really important goal for us, it is one of our priority aims under our strategic plan.”

The opposition of successive Tory-led governments to an inclusive education system dates back to the party’s 2010 election manifesto, in which it said its policy would be to “end the bias towards inclusion of disabled children in mainstream schools”.

Five years later, its general election manifesto boasted of how it had “created 2,200 more special schools places through our free schools programme”.

In 2017, the CRPD was highly critical of the UK government’s approach to inclusive education, and the “persistence of a dual education system” that segregates increasing numbers of disabled children in special schools.

Meanwhile, EHRC has called in a new report for the government to do more to safeguard the rights of disabled and other children and to protect them from the pandemic.

In a report to the UN Committee on the Rights of the Child, the commission said that school closures and “inequalities in home-learning environments” risked widening the gaps in attainment already experienced by disabled pupils.

It also warned of the challenges affecting the provision of special educational needs and disability (SEND) support in schools, with “staff shortages, social distancing rules and the need to concentrate resources on the health emergency resulting in local authorities reducing SEND provision and, in some cases, ceasing it all together”.