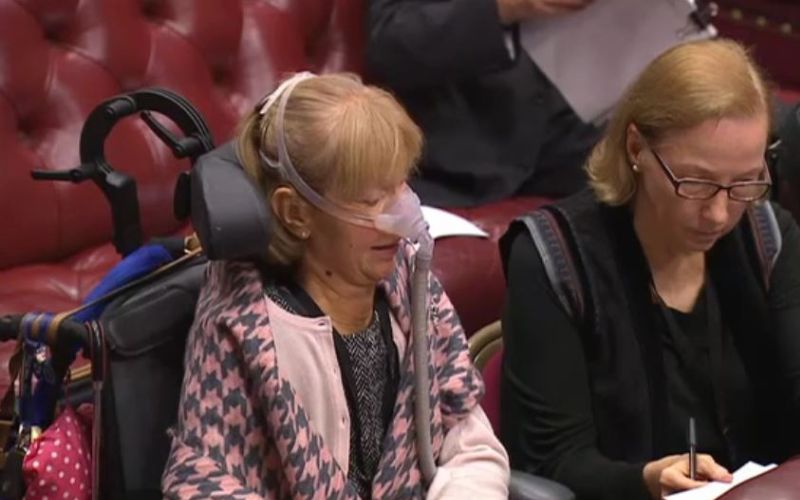 Two leading disabled campaigners have criticised ministers for failing to agree key measures that would improve the accessibility of bus services.

Baroness Campbell said she felt that discussions she had been carrying out with transport ministers and others over the last year had been a “waste of time”, after junior transport minister Andrew Jones rejected a bid to toughen proposed measures on providing information about accessible transport.

When the bill was being discussed in the House of Lords last year, she had suggested an amendment that would have forced bus operators to publish their policies on access for disabled people.

She warned then that government plans for new guidance on the issue would “never deliver the result that we need – that is, full, guaranteed access for disabled people”, and she agreed to meet the junior transport minister Lord Ahmad to discuss other legislative options.

But Jones told MPs last week that although he knew that “for many disabled people, a lack of information on the accessibility of bus services may well prevent them from travelling at all” – and that he had discussed the issue with Baroness Campbell – the government would go no further than publishing guidance.

Baroness Campbell told Disability News Service this week: “I am not a fan of guidance at this stage in our disability equality history, as I explained in my amendment speeches on bus accessibility policies during second reading, committee stage and report stage (pictured).

“Guidance will not cut the mustard, hence my amendment and work towards developing a regulation that we could all work with (financially and practically).

“I now feel all that work over a period of a year in the Lords was a waste of time.”

Paulley had been hoping Jones would agree new measures that would give bus drivers the power to enforce the priority use of the wheelchair space for wheelchair-users.

This would have meant that non-disabled people refusing to move from the wheelchair space – unless there were exceptional circumstances – would be breaking the law.

The push for a change in the law follows Paulley’s victory in the Supreme Court in January, in which the court ruled unanimously  that First Bus had breached its duty to make reasonable adjustments for disabled people under the Equality Act through its “first come, first served” policy on the use of wheelchair spaces.

The minister for disabled people said after the ruling that she would speak to the Department for Transport about “clarity, good practice and powers a transport operator has to ensure this ruling become a reality”.

But Jones told MPs that he had not yet decided what action to take.

He said that he had set up a group of bus operators, passenger groups and disabled people so he could hear their advice on how to enforce the Paulley ruling over the summer “before we reach a conclusion on the best course of action”.

He added: “I can see practical difficulties, as I think did the Supreme Court.

“We have to recognise that wheelchair users will not be the only passengers with a genuine need to use that space.

“Interventions should also protect the interests of parents with disabled children, those with walking frames and the owners of assistance dogs.

“This is a complicated issue and we have to take care to find the most appropriate solution.”

But the Labour MP Daniel Zeichner said: “I had hoped that we would make more progress on the Paulley issue.

“The Supreme Court has basically passed the matter back to us to make some decisions.

“I heard what the minister said about how difficult it is; it clearly is a very difficult issue and no one is pretending it is easy.

“However, every bus driver in the country faces this on a daily basis. Without leadership from us, they will still face this problem.”

Paulley said after the debate that he had not been approached to be part of the minister’s working group, but had asked to be included when he heard it mentioned during the debate.

He said he believed Jones already had the ability to change existing “conduct regulations” to give bus drivers the power to free up the wheelchair space on their vehicles for wheelchair-users.

He said: “I don’t really see what the problem is regarding amending the conduct regulations to enforce priority for wheelchair space.

“I am obviously biased, but to me it’s pretty obvious: make it a criminal obligation for a non-disabled person to move from the wheelchair space except in genuine exceptional circumstances (eg somebody giving birth in it).

“Then put an obligation on the driver to tell temporarily able-bodied people to move, and to take enforcement action if necessary.”

But Paulley said he did not trust the government to take the necessary action.

He said: “Maybe some ministers are less mercenary and duplicitous than others – but given the swathe of cripple-kicking abuse administered by the government, I have a hard time believing that any seniorish member of the government is genuinely prepared to consider increasing regulatory burden on any industry for the benefit of disabled people.”

Meanwhile, Doug Paulley’s father Stuart has set up a petition calling on the government to use the bus services bill to make it mandatory for non-disabled people to vacate the wheelchair space when a disabled person needs it.