You are here: Home / Transport / Ministers give councils and schools go-ahead to breach bus discrimination law 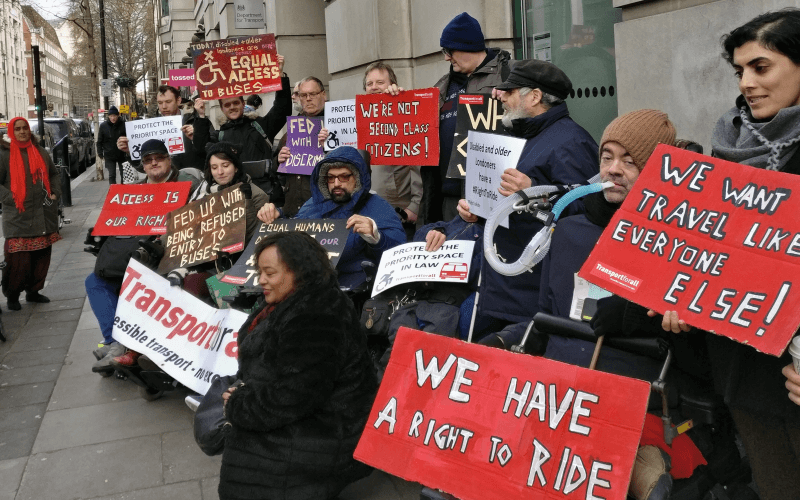 Transport ministers have quietly given permission to councils, schools and colleges to breach a key anti-discrimination law for at least two years, and possibly up to four… in the middle of the general election campaign.

The decision by ministers to allow providers of home-to-school services for students to continue running inaccessible vehicles has been done while parliament is not in session.

It means that MPs and peers have not been given a chance to question the decision in parliament.

DfT says the decision was made by ministers before parliament ended on 6 November, but the letter was not sent until late last week (21 November).

In the letter, education providers are told they will be allowed a temporary exemption to the Public Service Vehicle Accessibility Regulations (PSVAR), even though they have had 20 years to prepare for those regulations coming into force in January.

The regulations require vehicles to have a wheelchair space and boarding facilities, priority seating, colour-contrasting step edges and other features “to enable disabled passengers to travel in comfort and safety”.

Coaches first used before 2001 have until January 2020* – just five weeks away – to comply with PSVAR, but many providers have failed to prepare for the change and are continuing to use inaccessible coaches that segregate disabled and non-disabled students on their school journeys.

Now, with the 1 January deadline just weeks away, ministers have sent an urgent letter to councils, schools and colleges offering them a temporary exemption.

Vehicles that provide only free school transport do not have to meet PSVAR, but many education providers run paid-for services, or mixed services that provide some free seats but charge other students to use the service.

This means that, under the law, they should stop charging all students from 1 January, only allow students entitled to free school transport to use the service, or ensure they only use accessible vehicles.

The issue first became public in February, when accessible transport campaigner Doug Paulley began legal action against North Yorkshire County Council for continuing to use inaccessible buses for home-to-school transport, while still charging some pupils to use spare seats on the vehicles.

But the government left it until last week – while parliament was not in session and former MPs were fighting re-election campaigns – to write to schools, councils and sixth form colleges to offer the exemption.

The Department for Transport (DfT) letter says: “We have recently become aware many providers of fully paid-for and mixed home-to-school services are not in a position to provide compliant services currently, or from January 2020 onwards and that many providers will cease to provide mixed services, rather than secure appropriate vehicles.

“DfT Ministers concluded that in these circumstances, the right solution was to offer operators of home-to-school services a temporary exemption from PSVAR to allow them to become compliant.”

The exemption means providers will have to apply to DfT for an exemption certificate for every inaccessible vehicle they want to use.

The letter adds: “In making this decision, Ministers took account of the implications of these services ceasing for both pupils and local authorities, as well as the importance Ministers place on ensuring that transport services are accessible to both disabled and non-disabled people.

“Given the short timescale before the 1st January 2020 deadline, we have decided to communicate this decision at this stage, despite the pre-election period.”

It also warns local authorities that they are “bound by pre-election rules” – the process of “purdah” – if they want to make statements about the DfT letter.

The initial exemption will last for two years, with the possibility of a further two-year extension.

Paulley said the government’s decision to mass exempt school buses from the regulations was “a disgrace” as it would mean transport providers could continue to segregate disabled children, while the education sector could continue to use inaccessible vehicles.

He said ministers were abusing the exemption process to “avoid having to go before parliament” and “because of purdah they aren’t telling anybody about it”.

He said: “To me, their actions are undermining the clearly expressed intent of parliament.”

Paulley said the councils and schools involved should secure accessible buses in line with parliament’s intention in bringing in the regulations in 2000, but if they are unable to do that they should stop charging all students using their vehicles, as North Yorkshire council has done.

He said the decision by ministers to offer the exemption from PSVAR was “an insult” to those bus and coach companies, local education authorities, schools and sixth form colleges that have invested in providing accessible bus services.

He added: “Some have been in contact with me and are really pissed off that other providers are failing to make such provision yet are being let off the hook.

“I think the whole thing is a shambles and a disgrace.”

The failure by many councils, schools and colleges to plan ahead and ensure they have a supply of accessible buses also means many of them currently use accessible taxis to transport their disabled students, making it even more difficult for disabled people to book one themselves at the start and end of the school day.

DfT was not able to answer some questions about the ministerial decision, because of purdah, including how the exemption was justified when providers have had 20 years to plan for the January 2020 deadline; how DfT justified allowing them to continue to segregate disabled children for two, or even four, years; and whether the decision was fair on those transport and education providers that have invested in accessible vehicles.

But DfT told Disability News Service that some local education authorities said they had “mistakenly believed PSVAR was not applicable to ‘home-to-school’ transport”.

The department said the decision by ministers had followed consultation with stakeholders, including the Disabled Persons Transport Advisory Committee, and was being taken using powers provided by section 178 of the Equality Act 2010.

It said the decision was taken by ministers before the pre-election period, but “given the urgency the department has communicated this at this time to enable applicants to request exemptions for individual vehicles ahead of the 1st January 2020 deadline”.

Dft said it expected local authorities to “act to use compliant vehicles as soon as possible”.

Picture: A protest about the right to use wheelchair spaces on buses, outside DfT in January