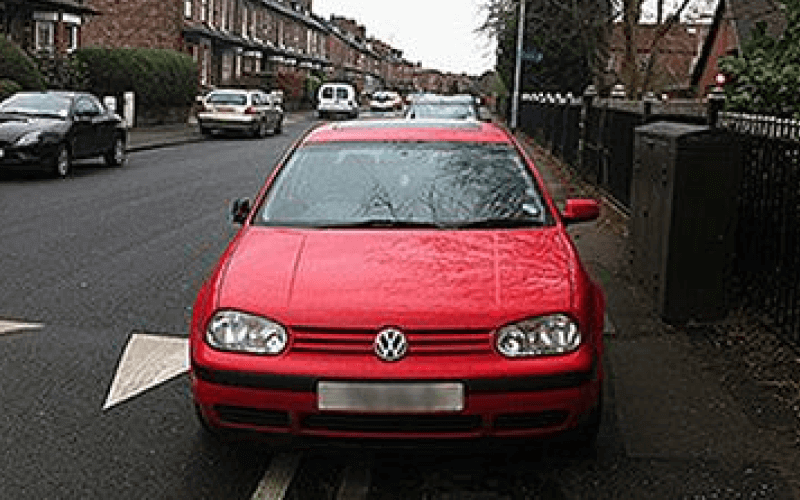 A committee of MPs has called on the government to ban parking on pavements, after hearing how the practice was putting disabled people all over the country in stressful, inconvenient and even dangerous situations.

The Commons transport committee says in a new report that pavement parking affects disabled people who are visually-impaired, use mobility aids or are neurodiverse.

It can reduce the useable width of the pavement, and make it impossible for those using mobility aids to pass by the vehicle, while users of guide dogs can be forced into the road.

But pavement parking can also add to people’s anxiety because of the lack of predictability, particularly for those who are visually-impaired, the report says.

The committee says it is “profoundly regrettable” that the government has taken so long to take action, and criticises the lack of “concrete actions” to tackle pavement parking and “improve people’s daily lives”.

A string of disabled people told the committee during the inquiry that the impact of the growing issue of pavement parking ranged from being “inconvenient to downright dangerous”.

Vehicles parked on pavements can block wheelchair-users, forcing them into the road or to retrace their route.

One wheelchair- and mobility scooter-user told the committee: “To avoid a vehicle often means entering the highway. This may put me in danger from other road users and this solution is far from practical.

“I have to drop down a kerb and then try and remount the pavement after the vehicle. Sometimes this causes additional stress and complications for me.

“A single vehicle is very annoying but when there are several vehicles to negotiate, I find myself staying in the road for prolonged periods of time.

“Whilst my scooter has lights, my wheelchair is not designed for road use. I am very vulnerable when on the road.”

Another wheelchair-user told the committee: “I stay home a lot because the amount of times I’ve got stuck, or had my partner ‘bounce’ my wheelchair down kerbs because of cars parked on the path makes any journey difficult or longer.

“Turning a corner, seeing a car parked on the path, and no dropped kerb is worrying.

“Sometimes paths are wide enough to turn around. Doubling back to find a safe place to cross the road and a dropped kerb is both tiresome and annoying.”

A third wheelchair-user calling for action on pavement parking told the committee: “One morning with a traffic officer and a book of tickets would result in 50+ at least unsafe parked vehicles between my house and the local shops.”

The committee’s report calls on the government to introduce a nationwide ban on pavement parking – apart from in London, where it is already banned – with enforcement by local authorities, which would be able to introduce exemptions.

Among the report’s other recommendations, the committee calls for a national awareness campaign to show the negative consequences of pavement parking for pedestrians such as disabled people, older people and children.

Campaigners have been pushing for government action since at least 2015, when a private member’s bill by Conservative MP Simon Hoare was withdrawn after a government minister promised to hold a roundtable meeting to examine the issue.

In London, local authorities or Transport for London can introduce exemptions to a ban that has been in place since 1974.

The transport (Scotland) bill, which is currently going through the Scottish parliament, includes a clause that would ban pavement parking across Scotland, which again would allow exemptions.

The legal position with pavement parking in Wales is unclear, says the committee’s report.

“Parking on pavements creates obstacles for many disabled people trying to get on with our everyday lives.

“To add insult to injury, often pavement parking also blocks the down curb.

Lilian Greenwood, chair of the committee, said: “We are deeply concerned that the government has failed to act on this issue, despite long-standing promises to do so.

“This is a thorny problem that may be difficult to resolve to the satisfaction of all, but the government’s inaction has left communities blighted by unsightly and obstructive pavement parking and individuals afraid or unable to leave their homes or safely navigate the streets.

“In the long-term we believe the government should ban pavement parking across England – as is already the case in London.

“Local authorities could create exemptions if they choose to do so, but drivers would know that unless it was expressly permitted it was illegal to park their car on the pavement.

“We recognise that implementing a nationwide ban will take time. In the short-term we have said that the government should make it easier for local authorities to put in place parking restrictions by removing some of the bureaucratic burdens they currently have to contend with.”

The Department for Transport (DfT) carried out a review of pavement parking last year and is now considering its findings.

The committee’s report will inform that process, as will the changes included in the Scottish parliament’s bill.

A DfT spokesperson said: “We are committed to ensuring that our roads work for everyone, but we are also aware that pavement parking can cause real problems for a variety of road users.

“The department recently concluded a review to better understand the case for changing the law, and ministers will be considering our next steps over the coming months.”