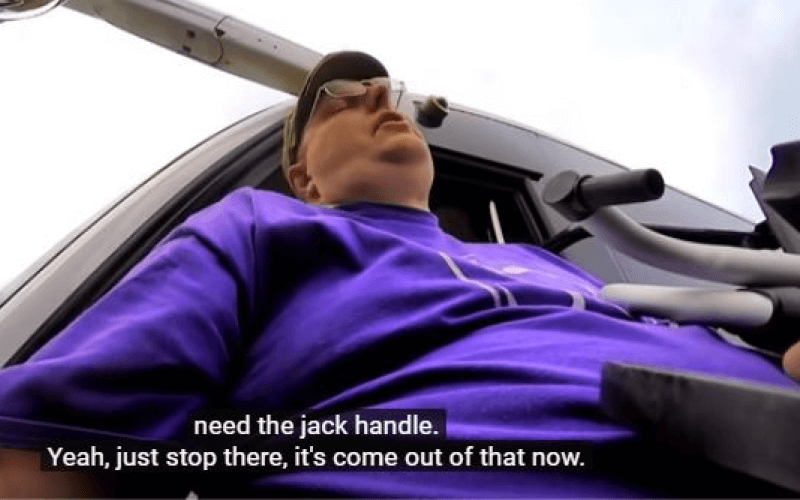 A disabled campaigner who took nine journeys on the same day to check the accessibility of the services provided by the UK’s largest coach operator experienced significant problems on all but one of them.

Wheelchair-user Doug Paulley had booked assistance in advance for services between Leeds and Bradford provided by National Express.

But all but one of last week’s nine journeys threw up serious problems, with malfunctioning lifts, drivers who did not know how to deal with the equipment, or staff failing to clamp Paulley’s wheelchair in place correctly and safely.

He caught all the day’s journeys on video and edited them into a 20-minute package of the worst moments.

The first journey saw him stuck in mid-air on the lift that was loading him and his wheelchair into the coach (pictured), with staff making repeated attempts to make the equipment work, and the equipment malfunctioning again at the end of the trip.

There were problems with the seatbelt on the second journey, but the third journey was problem-free.

After this third trip, he began taking pictures of the way his chair was being clamped, and found that not once on the remaining journeys was he restrained safely and correctly.

The fourth trip again saw the lift jamming, while the driver on the fifth journey had to repeatedly enter and reverse out of the bay because the ramp would not open properly.

When the ramp finally opened, the lift jammed.

On the sixth journey, the wheelchair was not clamped correctly, and on the seventh a member of staff reported problems with the “ratchets” that attach the wheelchair to the floor of the coach.

The next coach driver had problems clamping the wheelchair to the coach, while Paulley’s final journey saw the coach parked so close to the railings that it was difficult for him to access the ramp, while his wheelchair was again not clamped safely.

Last year, an investigation by Paulley showed that National Express was ignoring access laws by refusing to allow wheelchair-users to travel on its services on the same day they bought tickets.

Any coaches that have been adapted to be compliant with Public Service Vehicle Accessibility Regulations – as all of National Express’s have – must provide a wheelchair space and make that space available to wheelchair-users.

All companies operating scheduled services must ensure they are accessible by 1 January 2020, so other companies have less than a year to meet the necessary standards.

This time, Paulley booked his coach tickets in advance, and managed to make nine trips between Leeds and Bradford in different coaches in one day.

And he says his experiment shows that even those companies, like National Express, that are already running “wheelchair-accessible” services are actually offering an “unusable” system.

This means wheelchair-users do not even try to use the service, he said, so the equipment is never used.

Paulley said: “So when somebody like me comes along and bucks the trend by having the audacity to dare to attempt to use this system which everybody else takes for granted, it all falls apart spectacularly.

“The sham is exposed as being a tick-box exercise of going through the motions of meeting the legislation, but nobody actually checks that it works and it isn’t actually usable.

“Which is utterly shameful.”

Alan Benson, chair of Transport for All (TfA), the user-led organisation that campaigns on accessible transport in London, said Paulley’s experiences were “very disturbing and upsetting for Doug” but not a surprise to TfA.

He said: “Watching this experience is enough to put any disabled people off travelling by coach. This is unacceptable.

“Clearly the equipment doesn’t work as it should and significantly the staff training wasn’t up to scratch even though the operator provided more support than would usually be available.

“With rising train fares coach travel is seen by many as a more affordable alternative but based on this experience disabled people will be seriously considering whether this is a realistic or sensible alternative for them.”

A National Express spokesperson refused to say if the company was concerned about what it had seen in Paulley’s video.

But she said in a statement: “We take our commitment to accessible travel very seriously and always endeavour to facilitate travel on our coaches for any passengers requiring assistance, which includes wheelchair users.

“Customer feedback is key to our continual learning and informing any business decisions regarding our policy and procedures.

“We are in direct discussions with Mr Paulley to respond in detail regarding his travel with us on 30 December 2018.”