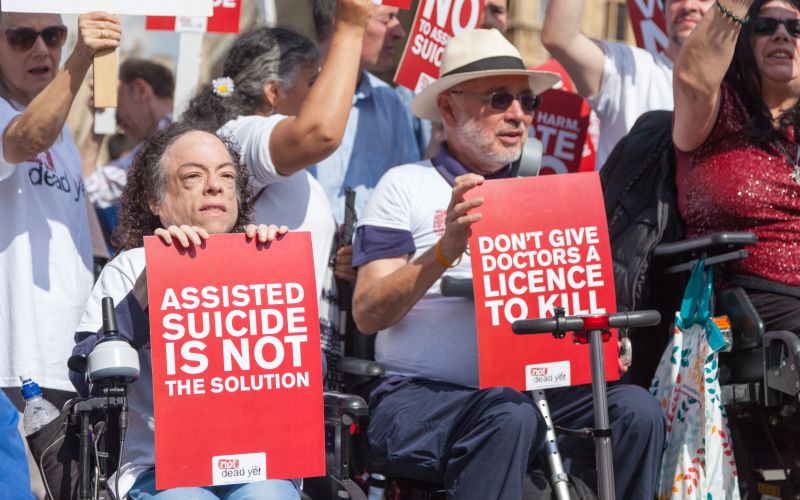 Disabled people have called on MPs and peers to focus their efforts on pushing for a right to live independently, and not a right to die, as the House of Lords prepares to debate a “dangerous” and “incoherent” bill that would legalise assisted suicide.

More than 100 members of the House of Lords are tomorrow (Friday) due to debate the second reading of a private members’ bill proposed by the crossbench peer Baroness Meacher.

The bill would allow “competent adults who are terminally ill to be provided at their request with specified assistance to end their own life”.

But in the build-up to the debate, disabled people opposed to the bill have recorded video messages, which have been sent to peers, explaining why they oppose legalisation.

Many of them call on parliament to focus on ensuring disabled people have a right to live independently, before even considering legalisation of assisted suicide, and they also warn that the bill adds to the “distorted view” that many have of disabled people’s lives.

Earlier plans for a protest outside parliament by opponents of the assisted dying bill have been called off by Not Dead Yet UK (NDY UK), the leading organisation of disabled people campaigning against legalisation, because of the COVID-related risk it would pose to those taking part.

The disabled crossbench peer Baroness [Jane] Campbell, NDY UK’s founder, said: “We thought about this long and hard, but we are talking about respecting and valuing disabled people’s lives and we are therefore not going to put them at any risk by calling for a demonstration.”

Instead, NDY UK is emailing peers with links to the videos recorded by its members.

Baroness Campbell said this would ensure members of the House of Lords would be able to hear directly from disabled people about their concerns about the bill, and could “reflect on them” in the lead-up to the debate.

She is likely to warn fellow peers tomorrow that supporters of the bill claim it will offer those at the end of life a “choice”, when in fact this is not a “real” choice because it fails to guarantee universal palliative care, fails to offer adequate support to those with progressive conditions, and fails to remove the fear of “being a burden” on family, friends and the community.

One of those who recorded a video for NDY UK, Ernest Bow, says: “It is a very dangerous bill that does not respect disabled people and their rights.”

Another, disabled activist Simone Aspis, says she believes that legalisation would lead to “increasing pressure” being placed on society and doctors for disabled people to take the assisted suicide option.

She says: “The focus needs to be on supporting disabled people’s right to live independently and have assistance with living right up to the day that somebody dies.”

Hannah Woods says in her video that many people “already have a very distorted view of the lives of sick and disabled people” and that the bill “feeds into it in all the wrong ways, because people are so afraid of becoming disabled, they’re so afraid of illness, that they don’t see that it’s still possible to lead a valuable life”.

Anne Pridmore, a former chair of the British Council of Disabled People, says in her video that disabled people need “the right to live, decent social care packages paid for at source through taxation”, and “good palliative care”.

She says she fears that legalisation would give some of those in power the chance of “ruling us out because we are seen as costing too much”.

NDY UK’s Dennis Queen, another prominent disabled activist, tells peers in her video that there are “many people who don’t have the support and help they need to live a decent quality of life, and we absolutely need that first”.

Another disabled activist, Jennifer Jones, says she is “scared” of the bill, particularly as someone with long-term experience of mental distress.

She tells peers: “I want you to know, and I want you to be able to understand, how terrified the prospect of this being put into law makes me and a lot of other people like me.”

She speaks of her own cycles of mental distress and points to cases in which people like her in some of the places where assisted suicide has been legalised have been assisted to die.

Baroness Meacher has said that her bill would only enable “terminally ill, mentally competent people whose suffering is beyond the reach of palliative care to die well and on their own terms”, but there are fears that once a bill becomes law it will gradually be widened to include other groups of disabled people.

Researcher Dr Miro Griffiths, a member of the Equality and Human Rights Commission’s disability advisory committee, although speaking in a personal capacity, says in his video that the bill is “vague and incoherent”, unsafe and dangerous and “should not be considered at a time when disabled people are experiencing widespread injustice, discrimination and oppression”.

He says: “It diverts attention away from important policy interventions that should provide people with necessary support to participate in their communities and access sufficient palliative care at the end of their life.

“We have arrived at debating dignity in death before there is dignity in life.”

And another disabled person, Sue Elsegood, who has been prominent in campaigning for the right to independent living, says she believes the government should be focusing on removing barriers and changing attitudes to disabled people.

So far, 12 UK disabled people’s organisations have told NDY UK of their opposition to the bill, while not one has come out in favour of legalising assisted suicide.

In a new article for The House magazine, a publication written mostly by peers and MPs, with a cross-party editorial board, Baroness Campbell says that passing the bill would be “a dark day in our nation’s history”.

She says: “It would run counter to our duty to protect the most vulnerable, and would exacerbate their fears, through insidious pressure, of being regarded as an expendable burden.”

And she warns that, as has happened in places where assisted suicide has been legalised, the bill would “doubtless be extended” to cover more groups of disabled people, other than those the bill currently covers.

Meanwhile, Baroness Campbell will be supporting an amendment to the bill proposed by the scientist, fertility studies pioneer and television presenter Professor Lord [Robert] Winston, who has called for the bill to be altered so that it refers to “euthanasia” rather than “assisted dying”.

They believe this would be a more accurate description of what the bill would allow.

She said: “They really find it difficult to speak out on this because it is so personal, and it does nothing for their feelings of self-worth.

“When people are saying to them, time after time, ‘We want to assist people like you to die,’ it doesn’t take much of a leap of imagination to take these words and apply them to yourself.”

Picture: Actor Liz Carr and other disabled activists protest outside parliament over a previous attempt to legalise assisted suicide