You are here: Home / Activism and Campaigning / Police could face XR legal action over disabled people’s right to protest 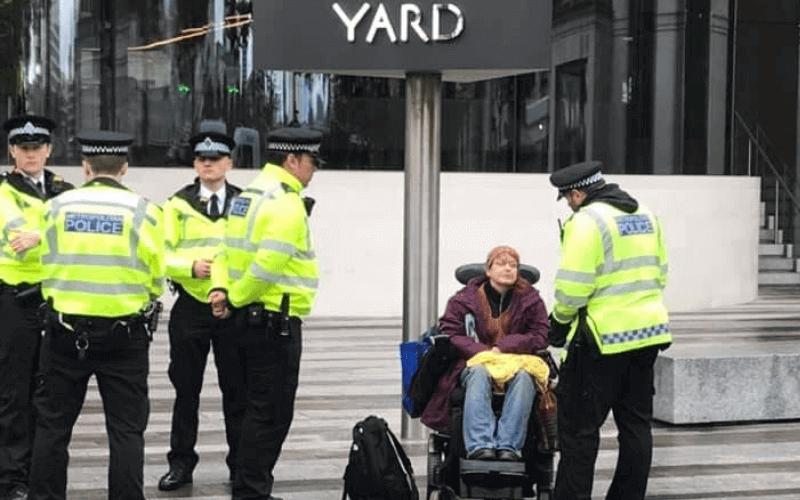 The Metropolitan police faces claims that it breached disabled people’s right to protest during this month’s Extinction Rebellion (XR) demonstrations in London, after a wheelchair-user was arrested because she needed support from a personal assistant (PA).

During the same action outside New Scotland Yard, officers arrested another disabled activist who was standing outside their headquarters asking – peacefully – for the return of vital independent living equipment.

Members of the XR Disabled Rebels network are now considering possible legal action in response to this and other measures taken by the police force during this month’s XR climate change actions in the capital.

They say the measures taken have added to growing concerns about the actions of police across the country, including admissions from two other forces that they have passed information about disabled protesters to the Department for Work and Pensions (DWP).

The Metropolitan police apparently refused to provide a written guarantee that it would not pass information from this month’s protests to DWP.

A small group had been outside New Scotland Yard in central London on Friday to protest against the confiscation of equipment that had been intended to make this month’s climate change protests more inclusive – and safer – for disabled people.

The plan was to carry out a short, peaceful, non-disruptive protest.

The group of about 10 activists were twice given permission to continue their protest – which called on the force to “give us back our access kit” – by police officers patrolling the area.

Sandra* and Bob Williams-Findlay, two of the disabled activists taking part in the protest, then approached the entrance to New Scotland Yard to ask to speak to Metropolitan police commissioner Cressida Dick.

Sandra said: “We wanted to tell her that this equipment had been taken and was very important because it made it accessible for disabled people to be able to peacefully protest.

“It had been hard going for all of us and disabled people had stayed away [as a result of the equipment being confiscated].

“Once people heard that there were not toilet facilities, it was more difficult, and they didn’t come.

“We wanted to make a stand as disabled people and speak up about the injustice of this.”

She said the force’s actions would affect future protests by disabled people, and she added: “Our voices are not going to be heard.”

Officers refused to accept a written complaint that Sandra and Williams-Findlay asked to be handed to the commissioner.

They rejoined their fellow protesters as about 20 police officers arrived, threatening the group with arrest if they failed to disperse.

One of the members of the XR Disabled Rebels network, Tracey Lazard, said that one of these officers was “visibly shaking with anger” as he told her that protests linked to Extinction Rebellion had been banned, under section 14 of the Public Order Act, unless they took place in Trafalgar Square.

That section 14 order was later extended to cover Extinction Rebellion protests across the entire city.

Lazard said: “He was right in my face, saying, ‘section 14, if you don’t move now you’re under arrest.’

“It’s my understanding that it’s good practice that there should be a series of warnings, but literally after a minute and a half tops I was arrested.

“There was no attempt to have a conversation and negotiate us leaving. It was completely unnecessary, aggressive policing, with no factoring in of the extra time it might take for me to pick up or drop stuff and for us to move.”

Lazard was taken to Lewisham police station and spent nine hours in a cell before being released pending further investigation.

Most of the rest of the group returned to Trafalgar Square, but one disabled protester, Nicki Myers, stayed outside New Scotland Yard for about an hour.

Myers, who has a life-limiting condition, could not be arrested for being part of an Extinction Rebellion “assembly” while she was on her own (pictured).

But eventually she needed support from a personal assistant (PA) to adjust her oxygen levels and hand her vital medication. And when the PA joined her, both of them were arrested.

Officers argued that she had become an “assembly” by being joined by the PA.

The two wheelchair-users were then surrounded by police officers while they waited for vehicles to take them to London police stations, and they were prevented from talking to legal observers or receiving food or water from fellow activists.

Although her friend, who uses a manual wheelchair, was taken into police custody, officers could not find a vehicle that would take Myers’ electric wheelchair.

Eventually, she was de-arrested, but was told she would need to return to be interviewed at a police station at a future date.

Myers said she believed the police actions breached her right to protest and the Equality Act.

“I want them to investigate. I want to challenge it in court. If they don’t follow up, then I will take a civil action instead for wrongful arrest.”

She said she believed the police actions showed that disabled people’s right to protest was “at huge risk”.

She said: “Any disabled people’s organisation that does any kind of protest should be extremely worried.

“The treatment of activists, particularly disabled activists, seems to be getting worse.

“I think we are seen as an easy target, which is horrific. The police have a duty of care and they are not exercising that duty of care.

“We want our equipment back. This is not over. People are still at risk while they are in London because we haven’t got the equipment.”

Myers said that in meetings held in the months leading up to Extinction Rebellion, senior police officers refused to provide written confirmation that information about disabled protesters would not be passed to DWP.

They also refused to provide written confirmation that they would ensure the wellbeing of disabled people and look after their equipment while they were in custody.

She said: “They have gone after kit that was clearly disability access stuff. That has taken away many disabled people’s legal right to lawfully protest.”

She said other disabled activists had made it clear on social media that they had cancelled plans to join the XR protests because of the confiscation of the access equipment.

Lazard said there was an increasing fear and anxiety among disabled people about being seen on a protest, and that the police actions were “undermining our legal right to protest”, which was “really worrying”.

She pointed to the “hostile environment” that had been created, including the “utterly outrageous” treatment of Nicki Myers, and other police forces that had previously admitted passing on information about disabled protesters to DWP.

She said of the actions of the Metropolitan police: “We are going to be speaking to some lawyers and seeing what the options are.”

This could include examining the equipment confiscation, the treatment of Myers, the general approach to policing and the failure to provide disabled protesters with extra time to respond to a police order, with the possibility that some of the force’s actions could even be seen as targeted disability hate crime.

Activists in the wider Extinction Rebellion movement were so appalled at how the disabled protesters had been treated that they organised a solidarity protest – again, entirely peaceful – outside New Scotland Yard two days later, with estimates suggesting that as many as 1,000 people may have attended.

All three of the disabled people who had been arrested on Friday were at the gathering.

Myers told those present: “Today I am overwhelmed by you guys being here supporting XR Disabled Rebels.

“I’d like to tell you that disabled people have a rich history of civil disobedience and every right we have was fought for.

“Our accessible buses we got because people chained themselves in the road. We are useful in XR.”

Another disabled protester, Mary Ellen, told the gathering that she also had been “overwhelmed” to see so many people there.

She said: “I just wanted to express my gratitude to all of you for standing up for our planet and for being here to support disabled people to have an equal right to stand with you in peaceful rebellion.”

But she said that officers refused to accept the written complaint on Friday because they are unable to accept correspondence handed over in person at New Scotland Yard “for security reasons”.

And she said in a statement: “It is the police’s role to provide a lawful and proportionate response to any planned protest, balancing the potential impact on the community with the human right to protest.

“At the time of assemblies outside New Scotland Yard on Friday, 11 and Sunday, 13 October conditions under Section 14 of the Public Order Act 1986 had been imposed on Extinction Rebellion ‘Autumn Uprising’.

“The conditions stated any assembly by those involved in Extinction Rebellion ‘Autumn Uprising’ could only lawfully take place in Trafalgar Square. Therefore, the assemblies outside New Scotland Yard were unlawful.

“The [Metropolitan police] does not single out or disproportionately target any group or community.

“If those involved in an assembly to protest break the law, they are liable to arrest. Those people can also expect to be charge, prosecuted, and receive a criminal record.

“Officers have powers to seize any equipment which they believe will facilitate unlawful protest.

“Equipment is not seized on the basis of who it belongs to, but on its ability to enable unlawful protest which could cause serious disruption to the community.

“When officers make arrests, they do so with dignity and respect.

“The health and wellbeing of people in our care and custody is a priority, and we do all that is possible to provide appropriate facilities and support for individuals on a case by case basis.”

*Sandra has requested that only her first name is used 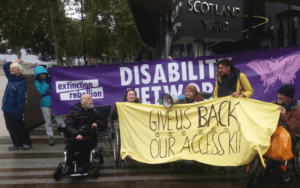