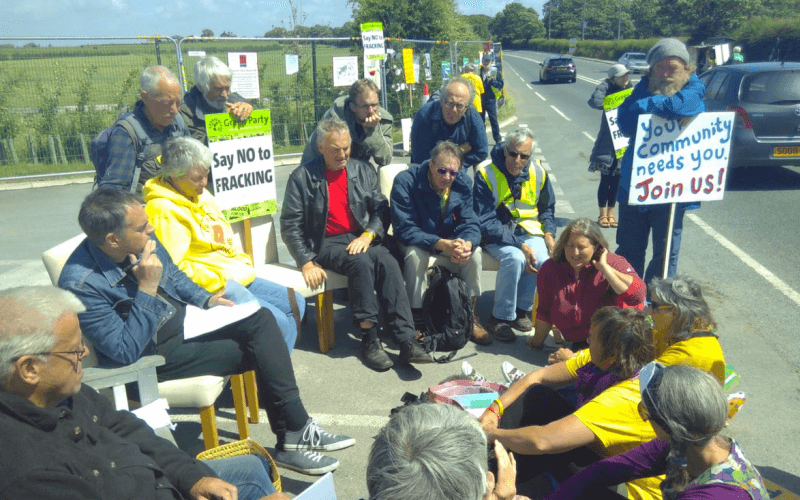 A police force has admitted passing video footage and other information about disabled anti-fracking protesters to the Department for Work and Pensions (DWP).

Many of the allegations concern the policing of peaceful protests about the drilling activities of the energy company Cuadrilla near Preston New Road, on the edge of Blackpool.

But DNS has also spoken to disabled protesters who say Lancashire police has passed information about their involvement in the protests to DWP, in an apparent attempt to have their disability benefits removed.

Lancashire police this week confirmed to DNS that it had passed on information and footage of disabled protesters at Preston New Road to DWP.

Despite this admission, DWP would only say that it had no “formal arrangement” with any police force to pass it information about disabled protesters, and it refused to say if the department had received material from Lancashire police.

Jonathan Bartley, co-leader of the Green party, and John McDonnell, Labour’s shadow chancellor, have described the police force’s actions as “shocking” and “unacceptable”.

Nick Sheldrick, a wheelchair-user with a spinal cord injury, was astonished to be called in for a reassessment of his industrial injuries disablement benefit just two months after he began attending protests at Preston New Road early last year.

Sheldrick, who used to work in the merchant navy and was injured while working on a ship, had received a lifetime award and said his doctor could not understand why he had been sent in for a reassessment.

He said: “The doctor wrote on his notes that I shouldn’t need to be assessed again because spinal cord injuries do not repair themselves.”

He said he had heard of “quite a few” fellow protesters who had been called in for benefit assessments.

Another of the Preston New Road protesters, a disabled woman with a fluctuating condition, had her Motability vehicle removed after her claim was suspended by DWP.

She is being told to repay months of disability living allowance and now faces the possibility of court action.

She was told that police had sent footage of her at a protest to DWP, and she was even told by a police officer who stopped her while she was driving to a protest in her Motability vehicle that they were “duty bound to tell Motability that you’re using your car for illegal purposes”.

She later received a letter from DWP saying that her claim had been suspended, which led to her losing her car, and she was then interviewed under caution and ordered to pay back £6,000 to DWP, while a file has been sent to the Crown Prosecution Service.

She was asked in the interview about footage that showed her walking a few steps forward and then a few steps back, and about being seen leaning on a bicycle as she walked up a hill.

She said: “What they were saying was absolute rubbish. Where are the photos of me falling over, me sleeping for 12 to 16 hours?

Another disabled eyewitness who has spent time at the Preston New Road site and knows this protester said this week: “I weigh up how I am going to spend the energy that is available to me that week and my capacity for [coping with] pain.

“It is a conversation that she and I have had about how we both – for any activity we do – will either spend time resting up in preparation to be able to do it or resting up to recover from it and to cope with the pain that has been caused.

“Police and DWP are trying to curtail people’s human rights by trying to stop them protesting.

“They are making me worry every time I go out to somewhere like that that it is going to cost me my ability to pay my rent, because they are going to say, ‘If you are able to stand at the gates, you should be able to do a full year’s work.’”

But she said that she and others make this decision to stand at the gates in pain “knowing it is going to cost [us] a lot of exhaustion later”.

She added: “Just because I can do something for a few hours a week does not mean I have the same ability as somebody else who is not disabled.”

Bartley, who has visited Preston New Road and spoke to Disability News Service before the police admitted passing the data to DWP, said if it was true that information had been given to DWP about protesters who claim disability benefits it was “absolutely shocking”.

He said: “The police and DWP need to come clean and make clear if this is happening.

“There needs to be full disclosure if this is the case. That would be an underhand tactic with dreadful consequences. It would clearly be unjust.

“It is absolutely shocking if this is happening. It should not be happening.”

He added: “Disabled people have as much right to be protesting in their own way as anybody else and in fact more right because we know when things go wrong [with fracking], the impact on local communities and the impact on air quality and of course the wider impact of climate change, it is always those who are most vulnerable who suffer the most and they have more right than anyone else to be there making their voices heard.”

McDonnell, who has also visited protesters at Preston New Road, says in a film about the targeting of anti-fracking protesters, produced for Netpol by Gathering Place Films, that the passing of such information to DWP by police was “unacceptable”.

He says in the film: “Does this mean disabled people can’t protest? That’s ridiculous.

“What we need to do is expose this. We can’t have the targeting of an individual just because they are a peaceful protester.

“This idea that just because you’re on disability benefits you can’t actually engage in the rest of society, that’s unacceptable.”

Despite McDonnell’s concerns, the police and crime commissioner for Lancashire, Labour’s Clive Grunshaw, defended the force’s tactics and said: “If police have any information to suggest that fraud or any other crime is being committed, they understandably have a duty to do something about it.”

Asked what arrangements DWP had with forces policing protests such as the one in Preston New Road to pass on information about the activities of disabled protesters, a DWP spokeswoman said: “There is no formal arrangement in place between DWP and any police force for this or other similar scenarios.”

When asked whether that meant that DWP had not received any information or footage from Lancashire police, she refused to comment further.

She also refused to say whether DWP accepted that disabled protesters claiming disability benefits had a right to protest.

But a Lancashire police spokesman said: “The DWP are a partner agency and where we have information to suggest that fraud may be being committed we have a duty to pass that on, including video footage if we have it.

“Do we accept that people with disabilities have a right to protest? Yes, of course we do.

“Are we concerned that by passing on information we are setting a dangerous precedent? No we are not.

“We will, of course, facilitate the right of anyone to protest lawfully.”

Another force spokesman later confirmed that Lancashire police had passed on information and video footage from Preston New Road to DWP, and he said the force had “a duty” to do so.

He denied that this was setting a dangerous precedent that was likely to deter other disabled people from exercising their right to protest, and said: “I don’t think there’s any concerns from our end.

“Ultimately, if there are people that are found to be claiming benefits down at the site there’s obviously an issue there.”

When asked if this meant the force believed people claiming disability benefits should not be allowed to take part in protests, he said: “It’s obviously a case by case basis really, what the benefits are being claimed for in terms of their position down at the site.

“That’s a decision for the DWP anyway. We have passed that information on, they will make a decision, an informed decision on the back of that.”