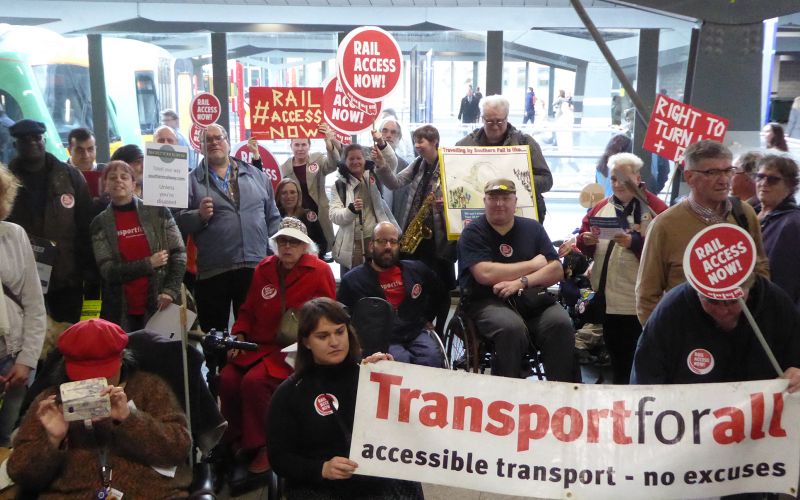 Disabled campaigners have attacked a “shameful” attempt by the transport industry to disguise the inaccessible state of Britain’s rail network.

Two weeks ago, the Rail Delivery Group (RDG) said that a European Commission report had found Britain to have the most accessible rail system in Europe.

It made the claim in response to the launch of a user-led campaign that called on the government to address the “disgraceful” and “unacceptable” treatment experienced by disabled rail passengers.

Transport for All (TfA) has issued a series of seven demands to the government and rail industry as part of its Rail Access Now campaign, and has described the current situation as a source of “national shame”.

But Disability News Service (DNS) has now analysed the European Commission report referred to by RDG and it shows that the UK actually has one of the least accessible rail systems in Europe.

When asked which reasons prevented them travelling by train, the UK came out third worst among all the EU countries for the number of respondents who blamed the inaccessibility of rail carriages; equal fifth worst for those who blamed the inaccessibility of stations or platforms; and equal sixth worst for the proportion of respondents who said they had been prevented from travelling by the lack of assistance by train or station staff.

It is only when respondents were asked if they were “satisfied” with the rail system’s accessibility that the UK came out ahead of other EU countries.

Alan Benson, chair of Transport for All, said he and his colleagues were “flabbergasted” by the rail industry’s attempts to disguise its failings.

He said: “The claims by the RDG are shameful. The EC report shows that by any practical measure the UK rail network is consistently amongst the worst in Europe.

“The high levels of satisfaction are simply an indication of what low expectations disabled people have in modern day Britain.”

Among TfA’s campaign demands is for the government to reverse its decision to defer until at least 2019 nearly half of the planned spending on its Access for All programme, which provides funding to improve access at rail stations.

The funding delays were first revealed by DNS 12 months ago.

Benson said: “The dreadful level of accessibility compared to our European cousins shown in the report just goes to emphasise the scandal of our government ram-raiding the Access for All fund to cover Network Rail’s inefficiencies.”

RDG, which represents both train operators and Network Rail, has so far refused to retract its statement.

Instead, an RDG spokesman said: “To quote the European Commission report in question, ‘Two countries consistently have the highest level of satisfaction with accessibility… the United Kingdom and Ireland.’

“Nevertheless, we know there is more to do to make the railway accessible to everyone and are keen to continue working with Transport for All, campaigners and disabled customers to improve services, stations and trains.”

Another of TfA’s campaign demands is for a rail system that allows disabled passengers to “turn up and go” if they want to travel by train, rather than having to book assistance 24 hours in advance.

Yesterday (Wednesday) evening, as part of the campaign, TfA led a protest (pictured) at London Bridge station over the loss of disabled people’s ability to “turn up and go” at many stations run by the under-fire provider Southern Rail, instead of having to book assistance.

The protest was backed by the Association of British Commuters.

Hannah Barham-Brown, a junior doctor and wheelchair-user, said:  “As a full-time doctor my patients need me to be at work on time; I can’t be late simply because I’m waiting for someone to help me onto the train.

“The nature of my work makes it impossible for me to know when I’ll finish my day and travel home so booking 24 hours in advance isn’t an option for me; I’m not asking for perfection, I’m just asking for the very basic access that I need to go about my everyday life.”