You are here: Home / Transport / ‘Why did it take disabled man’s death to lead to rail safety action?’ campaigners ask 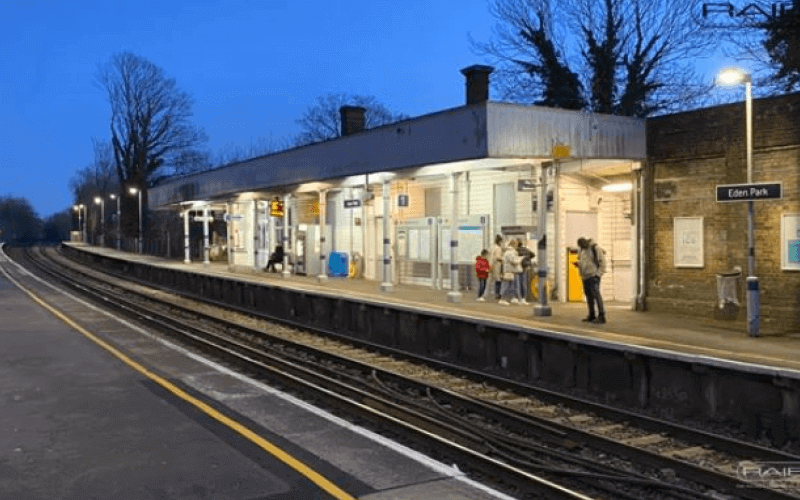 Investigators who examined the death of a visually-impaired man who fell from a railway platform that had no tactile strip to warn him he was approaching the edge say only half of UK mainline stations have such markings.

The Rail Accident Investigation Branch (RAIB) inquiry report found that the failure to fit the platform with tactile surface markings was a possible factor that caused the accident that led to the death of 53-year-old Cleveland Gervais.

Simon French, chief inspector of rail accidents, said the rail industry appeared to have “no coherent strategy for the provision of tactile strips, despite their obvious importance”.

Gervais, who used a mobility aid and travelled regularly by train, died on the evening of 26 February 2020 at Eden Park station (pictured) in south-east London, after falling onto the track and in front of a train that was arriving at the platform.

The inquiry found that he had moved to, and along, and then fell from, the platform edge as the train approached, probably because he was unaware of how close to the edge he was.

The RAIB report found that the rail industry did not always “effectively” consider “safety-based justifications for platform edge markings” to help blind and visually-impaired passengers.

The report also found that the methods used by station operators to “manage risk” at the edge of platforms “do not include adequate consideration of the risk to disabled passengers”.

According to the Office for Rail and Road (ORR), Network Rail was responsible for funding and installing tactile surfaces near platform edges, although Network Rail appears to have disputed this in discussions with RAIB.

Network Rail subsequently funded the installation of tactile surfaces at the edge of station platforms throughout the region, including at Eden Park, which is managed by Southeastern Railway.

The report also warns that information about tactile surfaces at station platforms “is not made publicly available by station operators”, which means blind and visually-impaired passengers “may be unsure whether the platform they are on is fitted with tactile surfaces, which could increase their risk of falling from the platform”.

RAIB said that its research “suggests that visually impaired passengers who wish to travel by train are exposed to substantially greater risk at station platforms than the general population” and that “tactile surfaces are effective at reducing this risk”.

It added: “Despite this, the overall result of the railway’s current practices is a patchwork of different approaches and conflicting understanding about when tactile surfaces should be installed.”

It concluded that there was “a strong case for reviewing the current policy on the installation of tactile surfaces”.

Andrew Hodgson, president of the National Federation of the Blind of the UK (NFB UK), said: “I would urge that tactile and visual markings should be installed at all stations as a matter of urgency.”

Sarah Leadbetter, NFB UK’s national campaigns officer, who was herself seriously injured trying to board a train with assistance in 2016 – although the incident was not connected with tactile markings – said: “I cannot understand why it has taken so long for these recommendations to be made.

“It is clear that all stations should have tactile markings and I am very alarmed to learn that there are so many still without this basic warning system.

“This could have been installed as a matter of urgency after the gentleman’s death last year and it makes me angry to think somebody had to die for action to be taken.

“It is also very clear that immediate improvements are needed to the assistance that is given for all disabled and vulnerable passengers at all railway stations.

“This includes all aspects of travel, including booking, assistance at the station, getting on and off the train and while on the train.

“I am more than willing to work with train operators along with my colleagues if they are willing to talk with us.”

Doug Paulley, a disabled campaigner, rail access expert and member of the Campaign for Level Boarding, said that what happened to Cleveland Gervais had been “utterly horrific”.

He said it only happened because Network Rail would not spend money to implement basic, straightforward, industry-accepted measures to improve safety for disabled people.

He said that reducing decisions on safety measures such as tactile surfaces to a “cost:risk:benefit ratio” was “foul and dehumanising”.

He said: “It is really great to see the RAIB so comprehensively dismantle this thinking. It isn’t academic, people’s lives are at risk.

“If Network Rail truly valued the safety of disabled people as they should, this wouldn’t have happened.”

Tony Jennings, co-chair of a rail accessibility panel and another disabled campaigner and member of the Campaign for Level Boarding, said it should not have taken the death of a disabled person “to get this on the radar”, and even now there was no apparent urgency from the rail industry.

He said: “We are an after-thought. It absolutely is life and death. It’s a lot more than an accessibility enhancement. You’re excluding visually-impaired people from travel.

“I was really shocked that there are so many stations that do not have tactile paving.”

He called for a cross-party agreement for “proper long-term funding on rail access and safety”, and a rolling programme of platform safety improvements.

Among its recommendations, RAIB says the Department for Transport (DfT) and Network Rail should create a “coherent policy” for establishing when tactile surfaces should be provided at the edge of station platforms.

It says the Rail Delivery Group (RDG) – which represents the companies that run Britain’s railways – should find ways to reduce the risk for blind and visually-impaired passengers using station platforms where tactile surfaces have not yet been installed.

It also says the Rail Safety and Standards Board (RSSB) – which is owned and run by the industry – should “develop processes to ensure that the rail industry has sufficient information, guidance and decision-support tools to fully address the safety risks associated with disabled people using the railway”.

And it says ORR should change its guidance for station operators, to make sure they publish information on whether the platforms they manage are fitted with tactile surfaces.

Rail minister Chris Heaton-Harris said the government was “fully committed to improving safety and accessibility at stations across our rail network”, and was “working with Network Rail on a plan for the roll-out of tactile surfaces on platforms, and will be making it absolutely clear to the industry that we expect them to prioritise installation whenever work is carried out”.

Network Rail said there was “a lot of important learning in RAIB’s report and we will work with industry colleagues to implement the recommendations”.

ORR said it welcomed the recommendation to use its Accessible Travel Policy guidance “as a vehicle to improve the availability of information on tactile surface at stations across the UK”.

RDG said it would “work closely with rail companies, RSSB and disability experts to work out the best way to make train travel safer for blind and visually impaired passengers, while supporting the Department for Transport and Network Rail to implement improvements”.

Southeastern said it continued to “work closely with all relevant parts of the railway and the regulator to ensure that our stations and our trains are as safe and as accessible as possible for everyone, and that all recommendations are implemented”.