You are here: Home / Activism and Campaigning / Your right to peaceful protest is under attack, disabled activists are warned 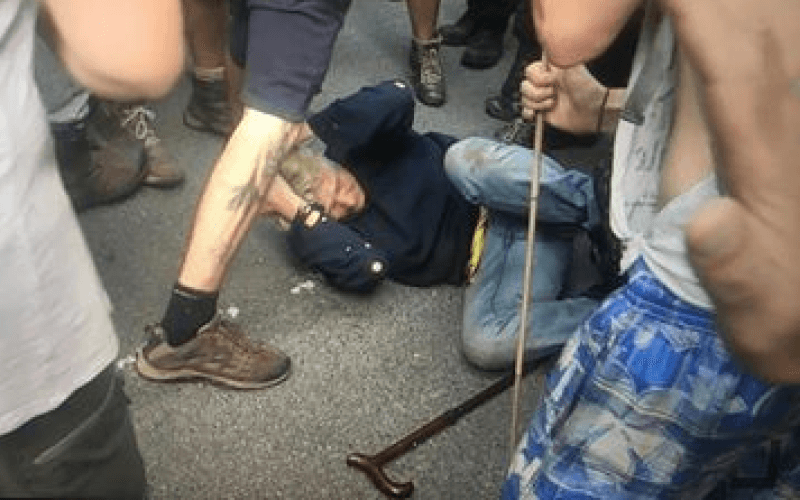 Disabled activists have been warned that their right to peaceful protest is under attack, as police forces across the country appear to be attempting to restrict the rights of certain groups of protesters.

The warning comes as concerns mount over the admission by Lancashire police that it passed information and video footage of disabled anti-fracking protesters to the Department for Work and Pensions (DWP), in an attempt to have their disability benefits removed.

Last week, Disability News Service (DNS) reported that DWP was refusing to say which other police forces have passed such information to the department.

Jonathan Bartley, co-leader of the Green party, said this week that this secrecy was “deeply concerning”.

He told DNS: “The right to peaceful protest is under attack in Britain today, and this is just one example of how activists are being scared into silence.

“There is a clear public interest in knowing what information has been passed from police forces to the DWP and I urge both sides to provide quick and full transparency.”

Further concerns have been raised by an academic who has spent years researching the policing of anti-fracking protests.

Dr Will Jackson, a lecturer in criminology at Liverpool John Moores University, warned of increasing attempts by police forces to define certain groups of protesters and types of peaceful protest action as “illegitimate”.

There has also been repeated testimony that groups of protesters – such as younger people, older people, women and disabled people – are being “marked out for particular treatment by the police”.

He pointed to the policing of anti-fracking protests at Preston New Road, near Blackpool, in Lancashire, where officers have appeared to target disabled protesters.

And he said the admission by Lancashire police that it had passed information about disabled protesters to DWP echoed evidence that women who had attended anti-fracking protests at Barton Moss, Salford, had been visited at the camp by social services and questioned about their suitability as parents because they were there with their children.

He said this seemed to fit with a wider picture that police forces were defining certain groups and types of protest as “illegitimate” and believed that “some people should be at a protest and some people shouldn’t”, which he said had serious implications for the right to protest.

He said that groups that seek “to be disruptive in a peaceful way” through direct action and to “disrupt and delay fracking operations” were now being viewed by police as “illegitimate”.

Jackson said disabled anti-austerity activists were right to be concerned, with police at local and national level apparently taking up the role of “defining what is and is not acceptable”.

He said: “The way that these official police voices are defining the distinction between a protester and an extremist has implications for all forms of protest.”

He added: “That doesn’t always fit with what people are doing, it seems to be related to what movements are opposed to.

“So anti-austerity protests which are targeted at a very central plank of government policy, I think people in those movements would be right to be looking at what is happening at anti-fracking protests and concerned about the implications.

“There are very real concerns about how groups are being defined as legitimate or illegitimate.”

Last month, Andy Greene, a member of the national steering group of Disabled People Against Cuts (DPAC), said he expected the police tactics used against disabled people at anti-fracking protests to be “rolled out across the protest movement” over the next year as the country saw a likely increase in political volatility around issues such as anti-fracking, anti-austerity and Brexit.

Greene said he believed it was “only a matter of time” before the tactics being applied to disabled people at Preston New Road were seen on the streets of London.

Jackson said that the Association of Chief Police Officers (now replaced by the National Police Chiefs Council) had explicitly defined activism as a form of criminality*, and so there was “a danger that anything that goes beyond simply standing stationary and waving a banner is seen as being illegitimate”.

He said: “We seem to be seeing a development of a police approach in response to these protests which has implications for the right to protest across the board, I think.”

He said that anti-fracking protests had also been labelled as “extremism” in police training sessions provided as part of the government’s Prevent counter-extremism programme.

They are hoping to produce the first draft of a national report early this year.

He said it was right for these concerns to be raised so that people “are aware of what is going on”.

He said: “Our work doesn’t seek to put people off protesting, but we are seeking to document what is happening so people can make informed decisions about their involvement.

“It doesn’t necessarily mean that people don’t go but it means that people will go to those protests with an understanding of what’s happening.

“It’s crucial that people know what is happening and also that people can go to these protests knowing their rights.”

*Policing Unacceptable Protest in England and Wales: A case study of the policing of anti-fracking protests, by Will Jackson, Joanna Gilmore and Helen Monk, in Critical Social Policy

Picture by Gathering Place Films: A disabled protester on the floor after an incident with police at an anti-fracking protest in Surrey