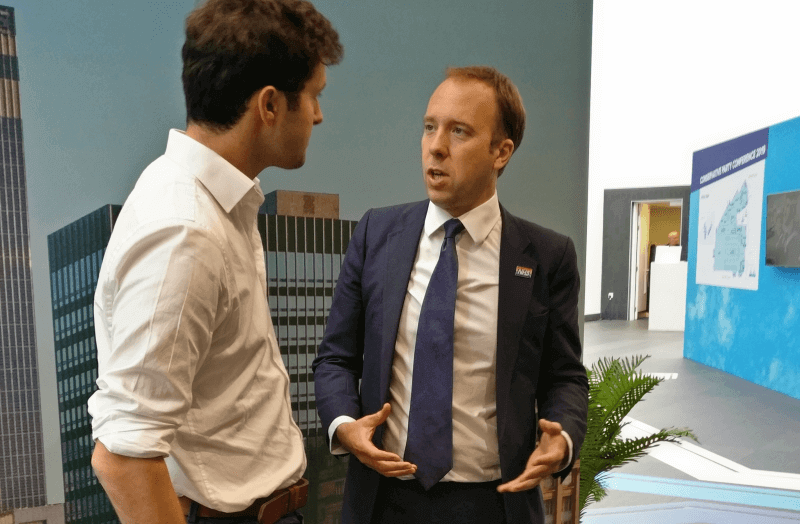 Measures introduced this week to address the scandalous treatment of autistic people and people with learning difficulties in mental health hospitals are strikingly similar to failed government measures announced seven years ago.

Health and social secretary Matt Hancock announced five measures this week that he said would put right the systemic flaws that leave people with learning difficulties and autistic people in isolated, segregated hospital settings, often for years at a time.

His announcement came just four days after a report by parliament’s joint committee on human rights condemned the “horrific reality” of life for young people with learning difficulties and autistic people detained in mental health hospitals.

But Disability News Service (DNS) can reveal that every one of the measures announced by Hancock (pictured, right) bears a strong resemblance to measures announced by the Tory-led coalition government in December 2012 in Transforming Care, its response to the Winterbourne View abuse scandal.

The revelations by DNS drew a furious response from disabled activists, who called for an end to meaningless government apologies and promises that fail to stop abuse in institutions.

The Department of Health and Social Care (DHSC) refused to answer any questions about the announcement this week, even refusing to clarify basic figures on the number of people in inpatient settings.

He said that all people with learning difficulties and all autistic people who are inpatients in mental health hospitals will have their care reviewed over the next 12 months, and will be given either a date of discharge or an explanation for why this is not possible.

But in 2012, the coalition said – in an almost identical measure – that it would review all such cases by June 2013, with “everyone inappropriately being cared for in hospital” moving to community-based support “as quickly as possible”.

This week, Hancock also announced a new independent panel, which would oversee case reviews “to further drive improvements in their care and support them to be discharged back to the community as quickly as possible”.

But in 2012, the coalition set up a new learning disability programme board with a similar aim, with members from government, local government, the NHS, the care regulator and “other delivery partners”.

Hancock’s third announcement this week was that all NHS and social care workers would receive training in autism and learning difficulties through a new training package.

Hancock’s fourth announcement was to commit to “greater transparency” through an “information dashboard” that would “publish data on inpatients in mental health settings who have a learning disability or are autistic” and would “include data on inpatient rates in different regions”.

Seven years ago, in an almost identical pledge, ministers promised to “establish key performance indicators” which would “enable the Learning Disability Programme Board and local services to monitor progress”.

Hancock’s final promise was to reduce the number of inpatients by “up to” 400 by March next year.

Seven years ago, his predecessor Jeremy Hunt, through the Liberal Democrat care and support minister Norman Lamb, pledged “a dramatic reduction in hospital placements for this group of people”.

There was even similarity in the statements issued by the ministers seven years apart.

Hancock said this week that “for those living with learning disabilities and autistic people, the current system can leave them in isolation for long periods of time, with no prospect of release into the community” and that he was “determined to put this right”.

Seven years ago, Lamb said the same group of people had a right to be “given the support and care they need in the community” and that it was “a national imperative that we act decisively”.

Kat Humble, director of Autistic UK, which is run by and for autistic people, said: “We at Autistic UK are saddened, but unsurprised, to hear the same rhetoric being repeated seven years after the reforms that were meant to improve the safety of autistic people and people with learning difficulties.

“It is especially distressing to note that there is no mention of involving actually autistic people and people with learning difficulties in the planning process, advocacy training, being employed as advocates, or anything else with regard to these measures.

“This lack of involvement has been the core issue since the start of locking us up in institutions.

“Autistic UK was created 10 years ago to try to raise autistic voices so that those in power would listen.

“Despite all our efforts and the efforts of our fellow campaigners, this has yet to happen.

“It is still the clinicians, parents, carers, and other so-called experts who are being consulted, rather than the people who experience the brunt of these policies, the cruelties and suffering, first-hand.

“While we welcome parents, carers, and the rest as valuable allies, we are able to stand up for ourselves. It is far past time to let us do so.”

But he said that such announcements “have no meaning” if the abuse continues to happen in “outdated, unsafe and isolated institutions”.

In May, People First called for the government to introduce a legal right to independent living, by incorporating article 19 of the UN Convention on the Rights of Persons with Disabilities into UK law, following the latest abuse scandal, this time uncovered by the BBC’s Panorama at the private Whorlton Hall hospital in County Durham.

In the same month, Lee and Simone Aspis, director of the consultancy Changing Perspectives, told Hancock in a letter that they were “extremely concerned and angry” that government targets to remove people from institutions had been missed and that people continued to be admitted to such hospitals and “continue to suffer”.

They also raised concerns then that people with learning difficulties and autistic people had been left out of a new working group that would “develop a new model of care”.

Lee added: “Our campaign #CloseATUs isn’t just about removing people from institutions, it’s about making sure there’s provision in the community such as adequate housing and social care support.

“Everyone should have choice, control and independence and have support to live in their chosen community.”

A DHSC spokesperson refused to explain what happened to the learning disability programme board set up in November 2012; why every one of this week’s announcements was almost identical to measures in the Winterbourne View response seven years ago; whether Hancock was embarrassed by this; and why Hancock thought this week’s measures would work when they had not done so over the last seven years.