MPs who have been shielding from coronavirus are set to lose their right to play a significant part in parliamentary proceedings, unless they attend parliament in person.

MPs are not due to return to the House of Commons until 1 September, but rules that previously allowed those at particularly high risk from coronavirus to play a key part in parliamentary proceedings from the safety of their own homes have only been extended to 2 September.

Although they are no longer able to take part in debates, shielding MPs can currently ask oral questions of ministers and respond to ministerial written statements online, and arrange for a colleague to vote on their behalf.

This is because a government motion – passed by MPs without a vote earlier this month – to extend the “virtual participation” arrangements expires on 2 September.

Asked if its actions risked forcing shielding MPs to make a physical return to parliament before it was safe for them to do so, a government spokesperson said: “In July we extended arrangements to allow for remote participation in scrutiny proceedings until 2 September.

“The position will be assessed when the House of Commons returns from the summer recess.”

The government announced on 22 June that the 2.2 million people in England who had been placed in the “clinically extremely vulnerable” group – including several MPs – would no longer need to shield from Saturday (1 August).

And those who were previously shielding and cannot work from home were told they could return to work from Saturday if that workplace is “COVID secure”.

All of this now appears set to apply to shielding MPs after their summer recess.

But disabled people who have been shielding from coronavirus since March have this week been expressing concerns about their safety, despite the government telling them they no longer need to shield from Saturday.

They have told Disability News Service (DNS) that they are confused, scared and distrustful of the government’s advice as the 1 August date approaches.

One of the MPs who has been shielding since March is Labour’s shadow minister for disabled people, Vicky Foxcroft, who is on immunosuppressant medication that places her among those most at serious risk from COVID-19.

She was forced to take legal advice earlier this summer after the government ordered an end to the “hybrid” system that had allowed some MPs to attend parliament and others to take part in debates and vote online from home.

She was advised that parliament was exempt from the Equality Act and so a legal action was likely to fail, while she also concluded that she was unlikely to win much public support as an MP taking a legal case for discrimination.

She told DNS this week that she decided her time was better spent fighting for other shielders, and so has focused instead on probing ministers about their rights.

In the last three weeks, Foxcroft has been following the updated government guidance on shielding, and has gradually taken walks and met small groups of people outdoors.

But she said: “The first time I went for a walk I was dizzy. I was panicking. I was quite surprised that my body did that to me without my permission.

“But that is obviously how lots of people will feel when you have just been inside for ages and you go outside into the world and people are not social distancing in the way that I would have liked.

“It has been quite a challenge, but now I can do it without the same level of anxiety I had.”

The government’s apparent decision to take protection away from shielding MPs means that, although she is still concerned about the significant risks to her health, she will likely have to return to parliament in person after recess.

But the Lewisham and Deptford MP will not be taking public transport, which she believes is too much of a risk, and instead plans to walk the nearly six miles to Westminster every morning from her home, and return at night via a taxi.

She has never claimed on her MPs’ expenses for taxis, even after a late-night Commons sitting, and so plans to pay for those taxi fares from her salary.

Foxcroft said she was frustrated that the government looks set to force her to return to parliament before it is safe, but had felt the same frustration in May when she and other shielding MPs were prevented from contributing to debates even though the necessary system for them to do so had been put in place by the Commons authorities.

She remembers “the frustration of having everything cut from you at a time when you have a lot to be raising – I’m shadow minister for disabled people and disabled people have been an afterthought right the way through this crisis”.

She added: “In September, why offer me a proxy vote and not the ability to contribute [in other ways]? It’s what MPs do. I just don’t understand the rationale behind that.”

She is not yet sure how COVID-secure parliament will be, particularly those parts outside the main Commons chamber.

For that reason – assuming the government does not extend the facilities for shielding MPs to contribute from home – she will spend her time either in the chamber or in her parliamentary office, or voting.

Her staff will continue to work from home or from her constituency office, although with a maximum of three social distancing staff in the office at any one time.

She will also have no face-to-face meetings.

She said: “I don’t know what parliament will look like inside, and also I don’t know how long this is going to carry on for and whether I can find a way to do things and keep myself safe.

“That’s another thought in my head and I’m sure it’s a thought in a lot of people’s heads.”

She is highly critical of the government’s failure to protect others who have been shielding and will have to return to their own workplaces from 1 August.

Foxcroft pointed to the lack of government guidance to explain what should happen if workplaces are not COVID-secure.

She said: “The government are just saying that employers will do the right thing, but you can’t always guarantee that.

“What protections will government have for those people if their workplace is not safe and secure? There will be a lot of places that will not be able to be safe and secure.”

She has also been asking the government to publish a list showing the levels of risk that people with different health conditions face from COVID-19.

She said: “People understanding what their own risk is is quite important.”

Other than knowing she was one of the group seen as being “clinically extremely vulnerable” to the virus, she has no idea what level of risk she faces.

Foxcroft was also dismissive of the role played by her opposite number, the minister for disabled people, Justin Tomlinson, during the pandemic.

Her criticism came after DNS research showed how the UK government had breached the rights of disabled people in at least 17 different ways during the coronavirus pandemic, while DNS also reported how the website of the government’s new Disability Unit failed to make a single announcement in more than three months, while more than 20,000 disabled people were dying from COVID-19.

Foxcroft said: “I don’t think he has been useful to disabled people during the pandemic.

“I can’t actually think of anything that he’s done. Where has that strong voice been for disabled people?” 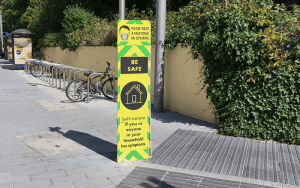