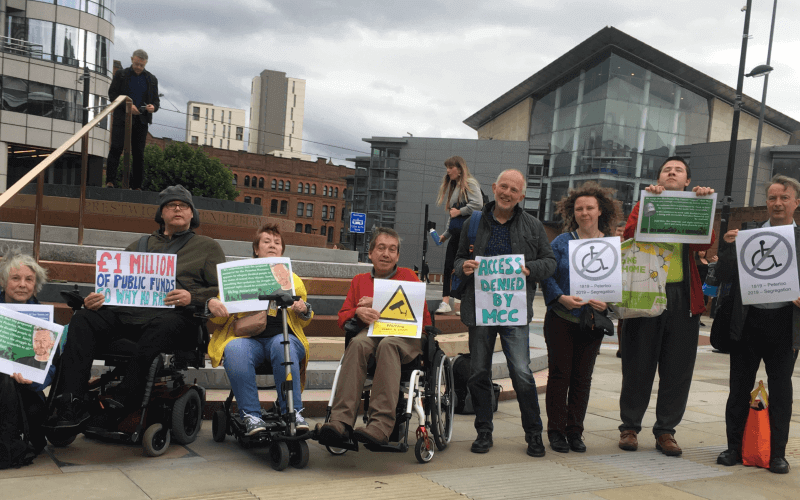 Disabled campaigners have persuaded a council to reconsider its decision that nothing can be done to ensure that a high-profile memorial to the victims of the Peterloo massacre is fully accessible.

Manchester City Council caused outrage among disabled people two years ago when it tried to push ahead with “discriminatory” plans for a memorial that would be completely inaccessible to many disabled people.

It was eventually quietly unveiled without a civil ceremony in August 2019, but disabled campaigners have continued to lobby the council to seek a solution that would ensure the memorial was accessible to all disabled people.

Last month, Manchester City Council appeared to admit defeat, announcing that “in the absence of any prospect of a workable and satisfactory permanent remodel solution for full accessibility the memorial will remain as it is”.

But just days later, the council agreed to set up a new working group of councillors that will enter discussions with disabled campaigners and allies who have come up with new proposals that would open up the monument to those with mobility impairments.

Disabled activists had previously described the memorial* as “a folly which shamed Manchester and opened the city up to derision and mockery”, a “physical manifestation of inequality, exclusion and prejudice” and “a million pound embarrassment”.

The memorial was designed to be used as a platform for speakers and demonstrators, mirroring those who spoke during the protest in 1819 that led to the massacre**, but it was completely inaccessible to many disabled people.

Now disabled campaigners and allies from The Campaign for an Accessible Peterloo Memorial believe they have come up with a solution.

A tentative design was sketched out by Mark Todd, a disabled access expert who started a Facebook page to protest at the design of the memorial in 2019, and retired planner Joan Rutherford, with input from other campaigners.

They describe their design as an “elegant, curved, processional ramp which goes around the back of the existing memorial like an arm being put around a friend’s shoulder”, and say it would be built from “very light, even transparent materials”.

As well as providing an access solution, their plans for the memorial – which they call The March to Peterloo! – would also tell the story of the massacre, including details of the main protagonists, and the names of towns and neighbourhoods from which people marched.

There are tentative suggestions that the new version could include lighting, solar-powered projectors and infrared movement detectors.

Todd said: “I think it’s time for the people of Manchester to sort this out and give us a fitting memorial to those who fought and died for equality back in 1819.

“We believe that The March to Peterloo! will make that possible.”

Dennis Queen, from Greater Manchester Coalition of Disabled People (GMCDP), who was at last week’s council meeting with Todd, said: “Commissioning a public memorial that excluded disabled people was wrong and quite rightly the decision drew widespread criticism, locally, nationally and internationally.

“Local disabled people mobilised and harnessed the collective anger caused by our exclusion.

“Nevertheless, GMCDP remains committed to working with Manchester City Council to identify how the Peterloo memorial can be made accessible for all.”

Dr Morag Rose, a disabled artist, activist and lecturer in human geography at the University of Liverpool, who is also part of the campaign, said: “It shames Manchester that an important memorial which should symbolise working class struggles for equality, democracy and participation instead excludes and segregates disabled people.

“I’m excited to see what happens next and I hope it will improve not just the Peterloo memorial but the way we think about the public spaces of our city and who they are for.

The council insisted this week that it had put its decision to abandon any proposed changes to the memorial on hold, pending discussion of the new proposals, rather than reversing it.

Cllr Luthfur Rahman, deputy leader of Manchester City Council, said: “We have worked with the Peterloo memorial access campaign over many months but have been unable together to find a workable access solution.

“We have committed to meet with them to listen to and consider what they are describing as a brand new proposal.

“We will go into that meeting with an open mind.”

*The memorial is situated outside the Manchester Central conference centre

**On 16 August 1819, paramilitary and military forces attacked more than 60,000 peaceful pro-democracy and anti-poverty protesters in Manchester, which led to 18 deaths and an estimated 700 serious injuries, in what became known as the Peterloo Massacre

Picture: Disabled protesters and allies in front of the memorial