You are here: Home / Politics / Failure to fund access costs of general election candidates is ‘denial of democracy’ 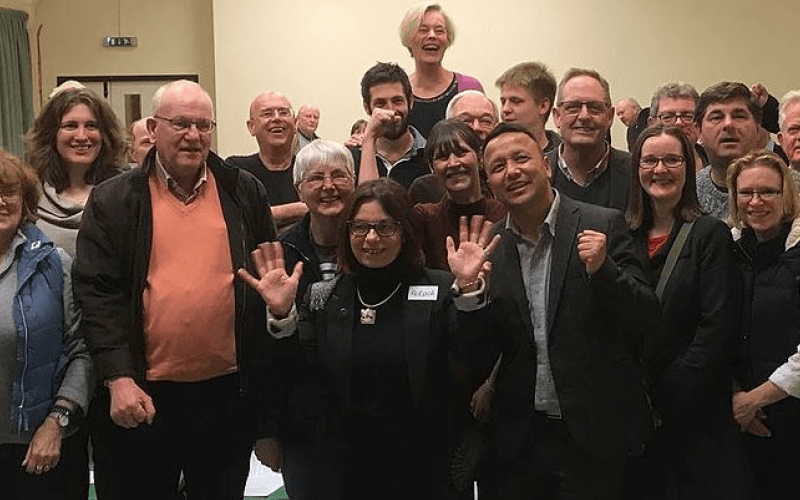 Disabled politicians preparing to contest the general election likely to be called within months will be hit hard by the government’s refusal to fund their disability-related campaign spending, a Deaf parliamentary candidate has warned.

Kerena Marchant, who uses British Sign Language (BSL) and is a disability rights campaigner and a TV producer and journalist, will be contesting the Basingstoke seat at the next general election.

But she fears she will not be competing on a level playing-field with other candidates.

With most observers expecting a general election to be called by new prime minister Boris Johnson within months, Marchant is concerned that the government has made no attempt to provide support for those disabled candidates contesting seats.

This failure is likely to hit efforts to increase the number of disabled MPs, with only about one per cent of MPs currently self-identifying as disabled people.

Marchant (pictured, centre, front) was selected by Labour this year to fight the Basingstoke seat currently occupied by Conservative MP Maria Miller, a former minister for disabled people and currently chair of the Commons women and equalities committee.

Marchant has pointed out that a new temporary fund to support disabled candidates who want to stand for elected office – the EnAble Fund for Elected Office, which went live in January – is not open to parliamentary candidates.

Marchant said the lack of funding for parliamentary elections “has completely cut disabled people out of the political arena” at a time when there is “growing talk and likelihood of a general election”.

She said she felt as though she was competing in “a race up a steep mountain and the other candidates are already over halfway up and I haven’t started.

“I not only have to fundraise for the campaign but also include some of my interpreting costs.”

She said that Miller’s time as minister for disabled people between 2010 and 2012, in a coalition government that “hit disabled people hard with austerity”, just “makes me want to run faster”.

She added: “We are living in a time when disabled people have taken the brunt of the government’s austerity cuts and many are living in poverty, many are unable to fulfil their potential, their futures stolen.

“Tragically, thousands have lost their lives because of the cuts and the Department for Work and Pensions is a hostile environment.

“This lack of financial support for disabled candidates puts disabled people in a separate political class and denies them democracy and peer representation in parliament at the time they most need it to fight back.”

Marchant was only able to contest the selection process for the seat because her constituency Labour party provided some funding for interpreters.

Now she has been selected, the local party is also making phone calls on her behalf, providing party volunteers to accompany her on visits and carry out note-taking duties, and paying for some interpreters at meetings.

Meanwhile, she has applied for a bursary from the party to cover her disability-related expenses.

The EnAble fund is a temporary, partial replacement for the Access to Elected Office Fund (AEOF), which was frozen by the government in 2015 after just three years and had provided funding for expenses such as BSL interpreters, assistive technology, personal assistants and taxi fares.

In contrast to EnAble, AEOF was open to disabled people seeking election to parliament.

Marchant said: “The government have deliberately kicked [AEOF] into the long grass and left it there, hoping that it is hidden and forgotten.

“Throughout this period when MPs have written letters and asked questions about it, they have used delays, diversions and excuses.

“There must be other disabled candidates hit by this or not standing. The sad thing is that if there is a snap election this autumn it could be the last chance to stand until 2024.”

“Disabled people need access to funding for disability-related expenses for general elections too.

“It would be a breach of article 29 of the UN disability convention [on participation in political and public life] if funds were not available for general elections.

“Failure to extend the fund to cover general elections will damage efforts to increase the numbers of disabled MPs.”

A long-delayed evaluation report into AEOF, when it was finally published last June, found that it had been “very expensive” to run.

It also found that only 14 per cent of disabled people applying for grants were Conservatives while 39 per cent were Labour candidates.

The Scottish government has set up its own fund for disabled candidates for local and Scottish parliament elections, delivered by Inclusion Scotland.

DR UK said it was in discussions with the Government Equalities Office (GEO) and LGA about extending the fund to cover a snap general election.

Kamran Mallick, DR UK’s chief executive, said: “We are aware that the current fund does not cover general elections, and we have spoken to the GEO/LGA about this.

“Discussions are ongoing about the possibility of making the EnAble Fund available for this very scenario [a snap general election].

“So yes, we would like to see the fund extended for this.

“As an organisation we believe that the barriers preventing disabled people from standing for local/national elections should be removed and part of this is through supporting individuals with disability-related expenses.”

He added: “The fund is designed to provide financial support for reasonable adjustments and its impact was demonstrated in the English local elections [where it helped 19 disabled people win seats on local councils].”

Asked about a possible snap general election, a GEO spokesperson said she would not comment on “hypothetical scenarios”, but she said in a statement: “There is not a general election currently scheduled for the time period of the fund but we will consider parliamentary by-elections on a case-by-case basis.

“The EnAble Fund for Elected Office runs between the financial years of 2018-2020.

“It was always intended to be used for the English local elections in 2019, and allocating the money across two financial years ensures all of the money can be allocated to candidates.

“This is an interim fund whilst the government undertakes a programme of work with disability stakeholders to help major political parties best support disabled candidates.”