You are here: Home / Independent Living / Labour conference: DLA ‘gave me back my life’, says activist 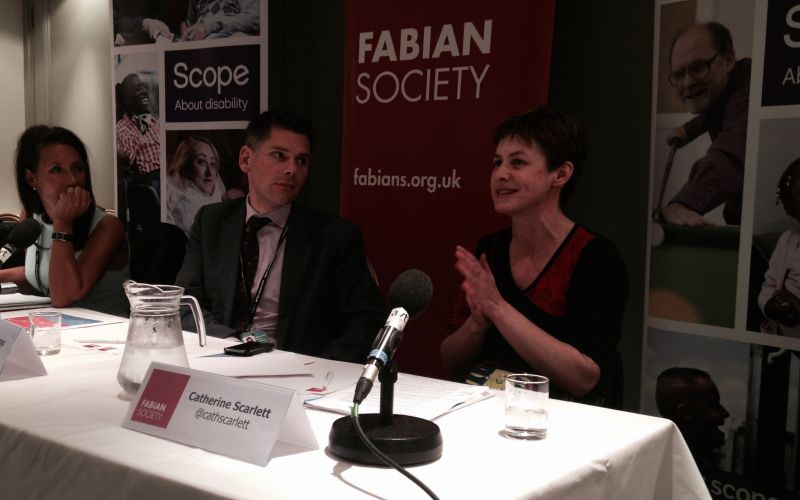 An activist has told a Labour conference fringe meeting how her attempts to secure the support she needed after becoming disabled left her feeling “like a human pinball”.

Catherine Scarlett became disabled four years ago, and has faced an “incredibly steep learning curve” in finding out “what support is available and how to get it”.

She told the fringe event, which was hosted by Scope and the Fabian Society and focused on the extra costs of disability, how it was only receiving disability living allowance (DLA) that allowed her to fund the manual wheelchair with powered wheels that she needed.

Last year, she said, she faced “quite frightening” disability-related costs of more than £10,000.

She said: “If it hadn’t been for DLA payments I would not have had the money in the bank to get the wheelchair; I wouldn’t have been able to carry on working.

“I managed to carry on working for a year after I got it. It gave me back my life. It means I can get around independently.”

But she said that coalition spending cuts to working-age DLA, introduced as part of the move to the new personal independence payment (PIP), needed to be reversed.

She said the PIP process was “designed to stop people getting benefits. It is taking away the money that they need to lead independent lives.”

Scarlett (pictured at the fringe event, watched by shadow disability minister Debbie Abrahams) also said the government needed to remove the “disgusting 20-metre rule”, which has slashed the qualifying distance for the higher rate of mobility support from 50 metres under DLA to just 20 metres under PIP.

“They cannot work because they have lost their ability to get out of their houses. Those people need to be given their independence back. It is totally wrong.”

Scarlett said that having to deal with DLA – and later apply for PIP – employment and support allowance, wheelchair services, hospital departments, social services and the council’s housing department had left her feeling like “a human pinball bounced around by all different departments”.

She is also taking her employer to an employment tribunal, after facing three years of “really severe disability discrimination at work”.

Scarlett, now a town councillor in Driffield, said: “I feel like in the last three years my life has been scripted by Kafka; it’s been going from bizarre to even more bizarre.”