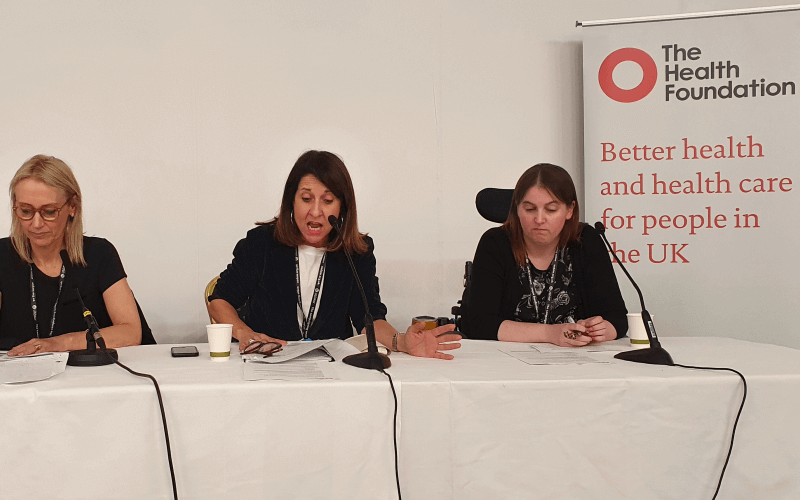 Labour’s shadow social care minister has refused four times to say if she supports the idea of free social care.

Liz Kendall had been asked by Disability News Service (DNS) whether she was in favour of free social care, and what she thought of the National Independent Living Support Service (NILSS) model for social care reform devised by the disabled people’s movement.

NILSS, which was approved by Labour conference in 2019, would provide a universal right to independent living that was “enshrined in law”, and would introduce free social care in England, funded by national and progressive taxation.

NILSS was also backed by Labour leader Keir Starmer during his Labour leadership campaign last year, but it was ignored in a major speech on care reform by Kendall in May.

In that speech she made no reference to the idea of free social care, or proposals for a right to independent living enshrined in law.

But she said on Monday: “I absolutely want independent living for disabled adults, absolutely non-negotiable, I want national eligibility criteria, national standards, national pay and terms and conditions for staff.”

But she said she was “not keen” on the system being run by Whitehall.

She said: “I really believe we need to have locally, absolutely locally run and delivered services.”

This vision appears to differ slightly from the NILSS proposals, which would be “managed by central government, led by Disabled people, and delivered locally in co-production with Disabled people”.

But she did not say whether a Labour government would introduce free social care.

When DNS asked her to clarify her position, she said: “I’ve just given my answer.”

Asked again, she said: “There’s a fundamental unfairness in the situation, in the system at the moment, and I really believe that needs sorting out.”

Asked a fourth time if she wanted to see free social care across the board, Kendall said: “I’ve given the answer; we will be setting out more details about our policies as we come to the next election.”

Despite her refusal to be clear on whether she supported free social care, she did refer in her initial answer to the 2014 Barker review, which she said “very well explained that we need to get to a system where that unfairness is removed”.

In fact, the Barker review called for the government to “make all social care for those with ‘critical’ needs free at the point of use”, to “extend this to ‘substantial’ social care needs as the economy improves” and by 2025 “provide support for ‘moderate’ needs as well”.

Kendall’s comments come only three months after Labour’s shadow leader of the House of Commons, Thangam Debbonaire, said in an online meeting that backing free social care for disabled and older people would just “give the Tories a stick to beat Labour with” and would lose Labour the next election.

Kendall was speaking at a fringe meeting, organised by The Health Foundation, at Labour’s annual conference in Brighton.

A little over an hour earlier, at an event hosted by The World Transformed political festival, also in Brighton, Disabled People Against Cuts activist Martha Foulds, herself a social care recipient with a personal budget, had said the principle of charging for care was “really shameful”.

She added: “We need a NILSS that guarantees free social care for people at any age, remembering that actually half of the social care budget goes on people under 65.

“And we need that to be co-produced with disabled people and the government.”

She laid out the basic principles of a Labour government’s 10-year plan for social care, which she said would transform access to services and support – where there are currently 300,000 people on council waiting-lists for care – and provide a “fundamental shift” towards “prevention and early intervention”, including “decent home adaptations”, the use of technology and new forms of services and support.

She said another principle would be to “guarantee independence, choice and control for disabled adults and make that an absolute reality”.

Kendall said: “A third of the users of social care and a half of the budget is for working-age adults with disabilities but they have been almost entirely excluded and neglected in the debate. This has got to change.”

She neglected to mention that her own major speech in May had itself neglected to discuss working-age disabled adults and focused instead on older people’s care.

Labour’s plan would also have to focus on the need for a new deal for care workers, she said, and providing new rights for families, including ensuring that their existing rights under the Care Act are implemented.

She was dismissive of the government’s latest social care proposals, which were announced earlier this month but were attacked across the disabled people’s movement for their inadequate level of funding, the failure to address the needs of working-age disabled people, the lack of detail, and the disproportionate impact of the plans on lower-income workers.

Kendall said the government’s plan – a new 1.25 per cent national insurance levy and a similar rise in dividend tax rates, ringfenced for health and social care, but with most of the new funding put aside for the NHS, at least for the first three years – “won’t come near to fixing the crisis in social care”.

Anna Severwright (pictured, right), a convenor of the Social Care Future network and a social care service-user, told the fringe meeting that the government’s announcement “didn’t actually give us any hope that anything was going to change”.

She said the Department of Health and Social Care planned to publish a social care white paper by the end of the year, but it was clear they were consulting “some very senior people in the sector” but not “people like myself who use social care or people who work in the front line of social care”.

She said: “We have to do better. We have to be aiming to give people full lives.

“More resources, better used. Giving people like myself more control over what that money is spent on.

“The power imbalance at the moment is huge.

“I feel fear every time I’m reviewed because I think are they going to cut my hours.

“We have to trust people that they are the experts in their lives and that we know what would work for us.

“My line to the government is that this has to be brave and transformational. If we are just tinkering around the edges of an already broken system, it won’t be enough.”