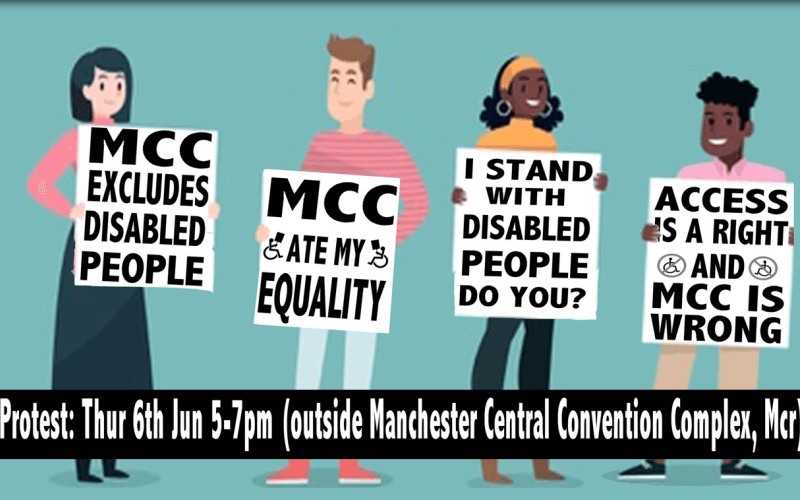 The leader of Manchester City Council (MCC) has been bombarded with emails from disabled people and their allies over his plans to push ahead with a “discriminatory” memorial to victims of the Peterloo massacre.

Many of them told Labour’s Sir Richard Leese that they were “angry and shocked” that a memorial designed to remember those who marched for liberty and equality should be “designed and built with discrimination and inequality at its heart”.

The council has told Disability News Service (DNS) it is unlikely that any “fundamental changes” will be made to the memorial, which is due to be unveiled to the public on 16 August, the 200th anniversary of the massacre.

But in a further sign of Leese’s dismissal of the concerns, he has refused to comment personally on the emails, and has even refused to provide an estimate of how many he has received.

Meanwhile, disabled people and their allies are set to protest this evening (Thursday) at the site of the memorial, outside the Manchester Central Convention Centre.

The council-funded memorial will be a series of concentric circles, with members of the public encouraged to climb the steps to a flat top.

It will be completely inaccessible to many disabled people, even though it has been designed by artist Jeremy Deller to allow it to be used as a platform for speakers and demonstrators, mirroring those who spoke during the protest in 1819.

On 16 August 1819, paramilitary and military forces attacked more than 60,000 peaceful, pro-democracy and anti-poverty protesters in Manchester, which led to 18 deaths and an estimated 700 serious injuries.

Deller himself has said he wants people “to be able to sit on it and have their lunch”, while the council’s own access statement said: “The artist’s intention is that the memorial will become the meeting point for the annual gathering of the Peterloo Memorial Campaign, as well as for other events related to the issue of human rights around the world.

“At these events, people will stand on it and around it.”

Deller said last week that he hoped that “once the memorial is built there might be a way to adapt it for wheelchairs”, but by noon today (Thursday) he had failed to comment on the council’s position that it was probably too late for further major changes.

Although some changes have been made as a result of concerns about access, including the addition of a handrail, it appears that wheelchair-users will still only be able to reach the height of the lowest of the circles via a ramp.

The Peterloo Memorial Campaign, which campaigned for years for a memorial to be built, has said that disabled people are “right to be frustrated and angry about the lack of access to the monument”, which “has been designed as a platform for speakers and demonstrators”.

Among those who sent letters to Leese was the disabled artist-activist Liz Crow, who told him she was “heartbroken” at his council’s decision to continue with its plans despite knowing that the memorial would be inaccessible to many residents and visitors.

She told him: “I am so shocked that this could ever have been allowed to get to this point, but to find that – even now you are fully aware of the discrimination inherent in these plans – you are going ahead regardless beggars belief.”

She called on him to halt the project immediately and “re-work the proposal to ensure that it is a memorial to democracy and not to MCC’s ineptitude and hypocrisy”.

Tony Baldwinson, who worked for the council for more than 10 years from 1991, appealed to Leese to admit he had made a mistake, and told him: “It is totally designed to be ascended, and disabled people would be excluded from a monument to democracy.”

Many of the others who wrote to Leese told him the memorial was “a fine example of inequality and discrimination embedded in design” and was set to be “a glaring metaphor for inequality and segregation” and an “act of exclusion that denies disabled people a voice, a blatant act of discrimination”.

One campaigner, Jane Angel, asked Leese in her email: “How did this happen in this day and age?

“A brand new memorial, in development for years, and we are building something that is not accessible to people to whom steps are a barrier.”

Another, Joan Rutherford, who campaigns for an inclusive built environment, told Leese in her email: “Manchester has waited 200 years for a fitting memorial to this appalling massacre.

“The requirements for the memorial were that it should be Respectful, Informative and Permanent (RIP).

“In my view this design is not inclusive and therefore is not respectful.

“If the monument is built as designed it will be an opportunity lost to celebrate and truly promote the aspiration for which people gave their lives… Equality.”

A council spokesperson said Leese had been “made aware” of questions from DNS about the emails.

The spokesperson said in a statement on behalf of the council, rather than Leese himself: “Our position remains that we have made significant changes to the original design of this public artwork to improve accessibility and that, while the memorial is not intended to be viewed exclusively from the top, the elements which provide information about Peterloo are all accessible.

“It is a misunderstanding of this memorial artwork to suggest that its sole or even primary purposes involves ascending it and that it cannot be properly viewed, appreciated or engaged with otherwise.

“While we totally respect the views of those who disagree and we are keen to continue constructive dialogue with them, it should be remembered that this is a memorial piece of art rather than a building or similar structure and is being created both in time for the 200th anniversary of Peterloo this summer and within the limitations of the site, the only one available within the St Peter’s Field area where the tragic events of 1819 took place.”