You are here: Home / Independent Living / Minister calls on her own government to act on ‘shared space’ street designs 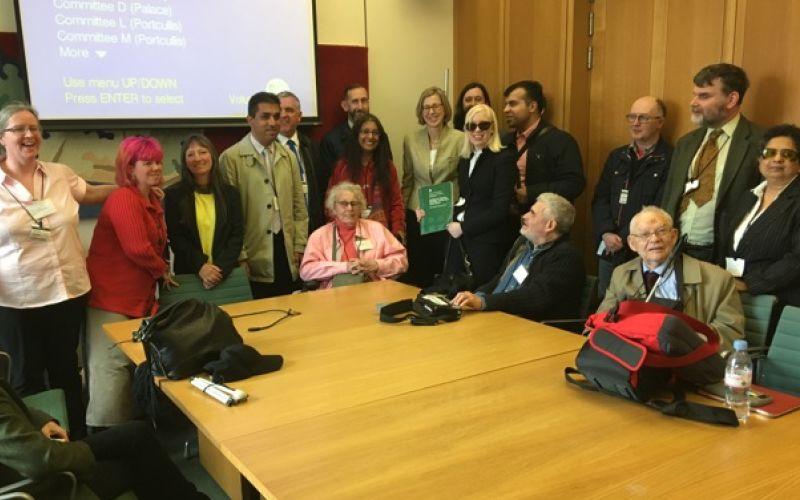 The minister for disabled people is calling on her own government to take “urgent action” to address concerns about the dangers of “shared space” street developments.

Sarah Newton called for action in letters she wrote to both the minister for transport accessibility, Nusrat Ghani, and the housing, communities and local government secretary, James Brokenshire.

Since she wrote the letters, the government’s accessible transport advisory body, the Disabled Persons Transport Advisory Committee (DPTAC), has also spoken out on shared space.

DPTAC has issued a position paper in which it is heavily critical of the government’s current position and calls for an immediate halt to all further shared space developments.

Newton met in parliament with disabled campaigners on 24 April (pictured), the same day that nine separate petitions about the dangers of shared space street designs were handed in to Number 10.

In Newton’s letter to Ghani, she calls for urgent action by the Department for Transport (DfT) to produce new guidance for local authorities that would warn them they risk breaching the Equality Act if they “deliberately install an area that prejudices disability inclusion”.

DPTAC says in its position paper that DfT’s current guidance is “widely argued to be inadequate and in need of fundamental revision” and calls on the government to “take a lead role in the shared space agenda”.

And it calls for “detailed independent evaluation” of all existing shared space developments, with the involvement of disabled people.

It adds: “The implementation of shared space schemes should be paused, until the independent evaluation referred to above has taken place.”

DPTAC also calls on the government to ensure advice is “readily available” so campaigners can challenge local authorities on “existing or new shared space schemes which exclude or have the potential to exclude disabled people”.

Shared space schemes often remove kerbs and controlled crossings from a street, encouraging vehicles, pedestrians and cyclists to share the same space, posing greater risks for partially-sighted and blind people, as well as other disabled people, including many of those who are neuro-diverse, or have mobility impairments, learning difficulties or are deaf.

Last September, campaigners from across the country gathered outside parliament to call for an end to unsafe shared space street designs, which they said risked turning public spaces into “no go zones” for many disabled and older people.

National Federation of the Blind of the UK (NFB UK) has taken a lead role in the campaign against shared space street designs.

David Bates, NFB UK’s street access executive, said: “The evidence is overwhelming that urgent action is required to bring an end to shared space roads and to halt the misery and devastating impact this road design has had on the lives of blind, partially sighted and deaf-blind people across the UK.

“Blind people with no sight can independently navigate the urban environment through the use of kerbs and controlled crossings.

“Taking away these features takes away this ability and leaves blind people avoiding the areas or relying on sighted assistance, which is totally against the principles of the public sector equality duty placed [on] local authorities under the Equality Act 2010.”

He said that “urgent action” was now required to ensure that all such schemes were now “revised and modified to ensure access for all”.

He added: “It is critical that we leave no one behind, and we design our urban environments and public realm based on inclusive design principles and guidance developed with disabled people.”

Andrew Hodgson, NFBUK’s president, welcomed Newton’s “positive support”, but said the government needed to “take ownership [of] the problems that have resulted from local authorities who followed government guidance on shared space”.

When contacted by Disability News Service, Newton refused to say if she believed there should be an immediate pause in further shared space developments.

Ghani also refused to say if she would call an immediate halt to shared space developments, whether she welcomed Newton’s letters and the DPAC position paper, or if she would produce new guidance.

The Department for Work and Pensions and DfT instead produced the following joint statement: “We take the issue of accessibility very seriously.

“We understand the concerns that have been raised around ‘shared space’ schemes and are considering what action may be appropriate.

“Disabled people must have the same opportunities to travel as other members of society, and it is essential that streets are accessible and safe.”

The two ministers will be meeting to discuss the concerns, while DfT will publish its response to a consultation on its Accessibility Action Plan, and its Inclusive Transport Strategy, later this year.

NFBUK’s campaign has been backed by many other disabled people’s organisations, including Inclusion London, Transport for All, Disability Rights UK, Inclusion Scotland, Merton Centre for Independent Living, and many organisations representing blind and partially-sighted people.

The disabled Tory peer Lord [Chris] Holmes, who has campaigned against shared space street designs, including publishing a report in 2015, said: “Three years on from my report, and with an increasing chorus of voices joining the tireless work of campaigners such as NFBUK, the government must take action to halt this dangerous and discriminatory urban design that excludes disabled people, and ensure Britain will finally be built with the Golden Thread of inclusivity, leaving nobody behind.”