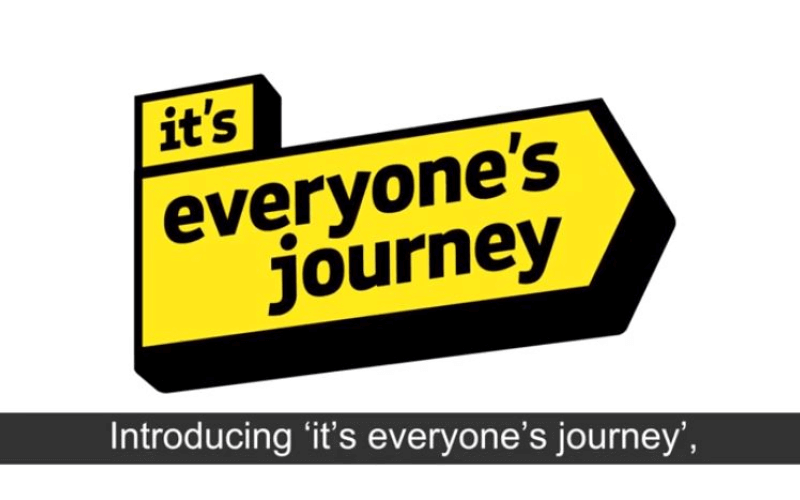 Disabled campaigners have delivered a mixed and wary response to a new government campaign that calls on the public to be “more mindful” of disabled passengers when they use public transport.

The Department for Transport (DfT) campaign, It’s Everyone’s Journey, was launched this week with a basic website and an aim to “make a big difference together”.

As part of the campaign, the government looks set to introduce an accreditation scheme modelled on the much-criticised Disability Confident disability employment programme.

But Transport for All (TfA), the user-led charity which campaigns on accessible transport in London, has decided not to be an official partner, although it has offered initial support.

Kirsty Hoyle, TfA’s chief executive, said her organisation had been involved with the campaign’s development and was “pleased to support the campaign as part of a wider portfolio of change, although at this soft launch stage we are yet to see the full picture”.

Hoyle said she was not yet comfortable with committing TfA to be a partner of the campaign, at least until it was clear that it was not being seen as a replacement for the pledges within the government’s 2018 Inclusive Transport Strategy.

She said: “I want to make sure that the campaign is used to drive the commitments of the strategy and not to be misunderstood as being the strategy.

“At the stakeholder meeting, I said that the campaign had value but not if it transposed the existing promises and not if it wasn’t open about the changes that the transport sector had to make, not just the public.”

Hoyle added: “Our members tell us that attitudinal barriers are one of the primary motivators for not travelling so we hope this campaign will encourage everyone to be more respectful of our shared public spaces.

“However, this does not overcome the many physical and systemic barriers to access, including staffing and infrastructure issues, so we maintain that the Department for Transport must be held to account for the promised developments as set out in the 2018 Inclusive Transport Strategy.

“We will be watching closely to make sure one is not allowed to replace the other.”

Leading disabled campaigners have been even more cautious in their initial reactions to the campaign.

Doug Paulley, who has played a huge part in drawing attention to discrimination across the transport industry through numerous legal actions and other campaign work, described it as “well-meaning but ineffective”.

“These being attitudinal, physical, compliance, and the rest of them – by public transport providers, regulators and some (a minority) of the Great British Public.

“The effort + money would be much better placed in doing that, than in a feel-good, well-intentioned-but-ineffectual campaign such as this.”

And he said if the government was serious about improving public transport, it would implement the ruling of the Supreme Court in a case he won nearly three years ago.

The Supreme Court ruled in January 2017 that First Bus had breached its duty to make reasonable adjustments for disabled people under the Equality Act through its “first come, first served” policy on the use of wheelchair spaces.

But the government has still failed to bring forward measures that would implement the ruling.

Another disabled campaigner, David Gillon, said the campaign name was “dreadful” and did not even mention disability, as if DfT was “just too embarrassed to mention it”.

He said: “I’m disturbed by the way the campaign is framing transport inaccessibility as a problem of disabled people’s confidence.

“If wheelchair assistance doesn’t turn up for a third of my train journeys, then I lack confidence when travelling, but my confidence isn’t the issue, the reliability of the passenger assistance service is.

“Similarly, if someone abuses me on a train (it’s happened), then it may affect my confidence in being able to travel without abuse, but the issue is the abuse, not my confidence. Confidence is a symptom, not a cause.”

Gillon said he was also alarmed at plans for an Inclusive Transport Leaders accreditation scheme, which appeared to be modelled on the government’s discredited Disability Confident disability employment scheme.

The campaign website says the scheme will be launched early next year and will provide transport operators with the opportunity to “earn one of three Inclusive Transport accreditations which publicly recognise their work to improve accessibility on their services.

“Operators who achieve Inclusive Transport Leader status will be part of a forum for the exchange of good practice, and act as ambassadors for inclusive travel.”

But Gillon, a leading critic of Disability Confident, said the idea of an accreditation scheme “fills me with dread, given the example of Disability Confident, a scheme too terrified of offending employers to actually mention the workplace disability discrimination it’s supposed to challenge, and which in places is awarded for doing less than the law requires”.

The government’s campaign points out that disabled people are 30 per cent less likely to travel than non-disabled people, which impacts on their access to jobs, healthcare and a social life.

It says that one in four disabled people say negative attitudes from other passengers prevent them from using public transport.

And it adds: “With your support It’s Everyone’s Journey will increase awareness of the issues faced by disabled travellers and improve their confidence to use public transport too.”

Partner organisations will apparently be working with DfT to “communicate the improvements that are happening at a local and national level to make public transport more accessible and inclusive of disabled people”.

This will be followed by an advertising campaign early next year that will “challenge how we all use public transport and encourage everyone to reflect on how common, and often unconscious, behaviours can impact others”.

DfT also announced this week that it would work with the Real Time Information Group (RTIG), a group of councils, transport operators, consultancies and the systems industry, to allocate £2 million of funding to small bus operators to provide audio-visual on-board information.

The funding was first announced in the Inclusive Transport Strategy, which the government published in July 2018.

DfT expects the funding to help up to 30 small bus operators.

Stephen Brookes, the government’s disability champion for the rail sector, declined to say if he supported DfT’s new awareness campaign.

But he said in a statement: “To me there is one major element of importance [which] is the funding stream to allow audio visual facilities on buses which are operated by smaller, possibly more rural, companies.

“These companies are running services which are not as financially sound as the larger urban services, so support to enable equal facilities is more than overdue.”

Nusrat Ghani, the accessibility minister, said: “Transport is at the heart of how we live our lives, and I am determined that we remove any barriers faced by disabled people.

“Every passenger, regardless of where they travel in Great Britain, should be able to do so confident that they have boarded the correct vehicle and are travelling to the right place.”

Meanwhile, the UK Civil Aviation Authority (UKCAA) has launched a call for evidence on the barriers faced by users of assistance dogs when travelling by air.

UKCAA said there was currently no definition of an assistance dog within UK regulations, “with a lack of formal clarity potentially causing limitations for passengers with reduced mobility when travelling by air”.

Last year, Disability News Service reported how many disabled people were being prevented from taking their assistance dogs on commercial flights, because their dogs were owner-trained and that training had not been accredited by a member of Assistance Dogs International or the International Guide Dog Federation.

UKCAA is now seeking views on what is meant by an assistance dog, which assistance dogs should be allowed on board aircraft, and whether there is the potential to widen the number of authorised training organisations for recognising assistance dogs for air travel.

The call for evidence ends on 10 January.