You are here: Home / Human Rights / MPs hear of activists’ anger and frustration over ministers’ response to UN report 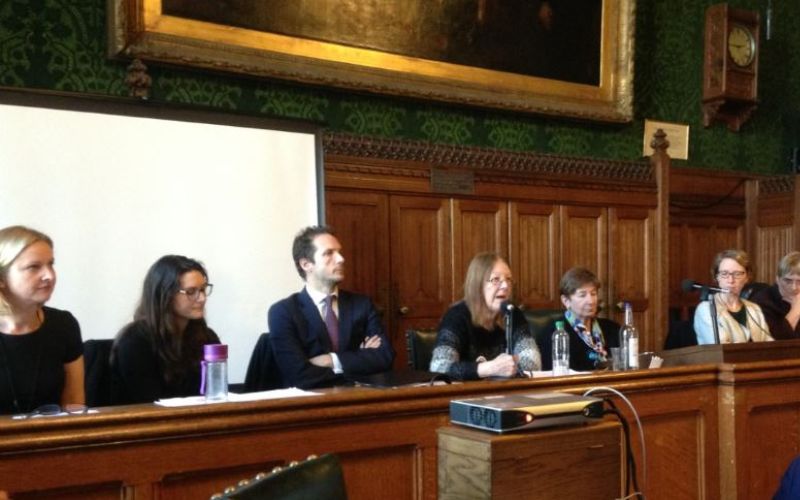 Disabled activists have told MPs and peers of their frustration at not being able to hold the government to account for its “grave or systematic” breaches of the UN disability convention.

But the UK government dismissed the report’s conclusions and all 11 of its recommendations.

Because the convention has not been incorporated into UK law, the government cannot be held accountable for the breaches in a court.

But disabled activists told a parliamentary meeting organised by Disabled People Against Cuts (DPAC) and Inclusion London this week that they would continue to push for the UN to do more to highlight the UK’s continuing breaches of the convention.

Linda Burnip, co-founder of DPAC, said the government tried hard to bury the CRPD report in November, but she insisted: “It isn’t just fizzling out. It isn’t just going away.”

Instead, she said, DPAC – whose activists triggered the UN inquiry – has produced a report for the UN that rebutts the government’s response.

And as members of the Reclaiming Our Futures Alliance, DPAC and Inclusion London are compiling a new report that will be submitted to CRPD as part of the “periodic review” of the UK’s progress in implementing the convention as a whole.

The government is expected to be questioned in public in Geneva about its overall progress in implementing the convention this summer.

John McArdle, co-founder of the Scottish-based anti-cuts group Black Triangle, said: “We as campaigners just find it incredibly frustrating that you can’t hold ministers to account.”

He added: “One of the things we would like to see is politicians of all stripes put aside their party political differences on the issue of the fundamental human rights of disabled people.

“People are dying and being made destitute. It is time we all united.”

Tracey Lazard, chief executive of Inclusion London, said the “damning” report had exposed the “misery and the hardship we know disabled people are experiencing right now”.

She said: “The position of the government in their response is one of blanket denial… it denies there is a social care crisis, yet we all know just a few months down the line that this position is now politically untenable.

“We see the same equally unconvincing denial from the government to the inquiry’s other findings.”

She said the situation for disabled people was “getting worse”, with imminent cuts to payments for some new claimants of employment and support allowance (ESA), removal of the severe disability premium through the introduction of universal credit, a freeze on many benefits and huge cuts to social care budgets.

And she pointed to research – reported by Disability News Service (DNS) earlier this month – that shows NHS bodies introducing policies that give them the right to “shunt disabled people deemed too expensive into residential and nursing homes against their wishes”.

Lazard said the government must “stop dismantling our rights”.

Baroness Deech, the crossbench peer who chaired the meeting, said the government had “brushed aside” the CRPD report, just as it had brushed aside the report produced last year by the Equality Act 2010 and disability committee, which she chaired.

No government minister attended this week’s meeting, with the Department for Work and Pensions (DWP) instead sending a civil servant.

Stephanie Harvey, a senior policy adviser for the Office for Disability Issues, said: “I understand some of the feelings expressed here as regards the inquiry and its response.”

She said the government wanted to “engage with stakeholders” through the periodic review process and then “work together” to address the issues raised.

But Baroness Deech told Harvey that the message coming through from disabled people was “already quite clear”.

She said: “I don’t know how much more consultation we need. We know the message. It’s the government’s response we are waiting for.”

She also criticised the Labour party, which has been repeatedly questioned in recent months over its commitment to disability equality.

It has failed to appoint a shadow minister for disabled people, failed to follow through on a promised letter to Labour-run councils on the Independent Living Fund, and withdrew an invitation to a disabled people’s organisation (DPO) to speak at a disability equality consultation launch because the DPO said it wanted to speak about independent living.

And last month, most of Labour’s peers abstained on a vote that would have forced bars, shops and restaurants to ensure their premises obeyed laws on accessibility when renewing their alcohol licences.

Asked by Baroness Deech why Labour had “sat on its hands”, shadow work and pensions secretary Debbie Abrahams said she was unaware of the vote, but added: “That’s disappointing.”

And asked by DNS why Labour had not yet called for a Commons debate on the CRPD report – as promised more than two months ago by shadow chancellor John McDonnell – Abrahams said: “We will bring it forward as soon as we can.”

Among those who spoke at the meeting was Nichole Drury, who gave evidence to the CRPD inquiry.

She told the CRPD investigators how her mother’s out-of-work benefits had been removed because she had twice been too unwell to attend a work capability assessment.

Her mother, Moira, had a number of serious health conditions, but spent the last six months of her life fighting DWP over its decision. She was only finally awarded employment and support allowance after she died.

Jonathan Bartley, co-leader of the Green party, praised the “landmark” and “absolutely damning” UN report and criticised the “entirely inadequate response” from the government, which he said was “an absolute scandal”.

He said: “We absolutely support the recommendations and the findings of the UN report.

“I think we need to be calling very much for them to be implemented.”

He called for a dual strategy of campaigning both inside and outside parliament for the report’s recommendations to be implemented.

The Liberal Democrat president, the disabled peer Baroness [Sal] Brinton, said: “I am going to be quoting the CRPD at length to make sure the government hangs its head in shame when it clearly breaches it.”

She said there was a need to highlight individual stories and persuade the government to move away from the approach of the work and pensions secretary Damian Green, of “complete denial that there is a problem”.

Abrahams said she was “disappointed” with the government’s response to the UN report, and that she believed there should be “repurcussions”, while the report had “certainly influenced the position the Labour party is taking with our policy development process”.

Backbench Tory MP Heidi Allen, who has spoken out against the ESA cuts, said she believed that the new minister for disabled people, Penny Mordaunt, “genuinely wants to get it right” and has “a real energy and determination to genuinely engage with disabled communities and to not assume she has all the answers”.

The SNP’s disability spokeswoman, Corri Wilson, said the report “should have sent shock waves to the core of this government”, and she criticised its “insufficient response”.

Picture: Some of the speakers at the meeting, including Nichole Drury (far left), Linda Burnip (speaking, centre), Baroness Deech (next to Burnip) and Baroness Brinton (far right)