You are here: Home / Activism and Campaigning / Ruling on DWP’s misleading universal credit ads ‘is vindication for direct action’ 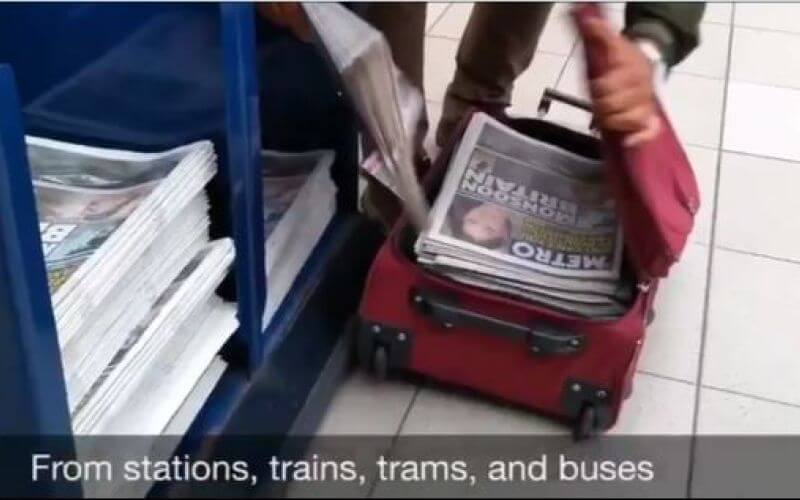 Disabled activists who took direct action against a national newspaper – after it published untruthful Department for Work and Pensions (DWP) adverts praising its much-criticised universal credit benefit system – say a watchdog’s ruling has vindicated their activism.

The Advertising Standards Authority (ASA) yesterday (Wednesday) ruled that DWP adverts promoting universal credit (UC) – published in the Metro newspaper and on the MailOnline website at a cost to the government of £225,000 – had breached its rules.

ASA said claims made in the adverts – which deliberately did not include DWP logos, in order to disguise their origin and make them look like genuine news articles – were misleading and DWP had failed to prove they were true.

DWP’s plans to publish the adverts were first revealed in May after grassroots disabled activists with Disabled People Against Cuts Sheffield (DPAC Sheffield) obtained a leaked DWP memo.

The memo revealed that DWP had signed an agreement with the Metro free newspaper series to publish a nine-week series of advertising features on UC, which would “myth-bust the common inaccuracies reported on UC” and “explain what UC is and how it works in reality”.

When the adverts began to appear in the Metro, DPAC Sheffield launched a campaign of direct action that soon spread across the country – with union backing – with activists removing tens of thousands of copies of the Metro and recycling them.

They believe they removed more than 100,000 copies of the free paper from news-stands (pictured), while DPAC activists in London returned boxes full of Metros to DWP’s head office in Westminster.

DPAC Sheffield told Disability News Service yesterday that the adverts had been “designed to manipulate public perception” about UC.

David Hayes, from DPAC Sheffield, said the ruling vindicates the decision to take “radical militant action” in seizing copies of the Metro newspaper and taking them to be recycled.

He said: “This ruling confirms that these advertorials were indeed misleading government propaganda, in other words: lies.”

He called on the Metro to apologise and promise that the paper will “never use their position to spread lies like this ever again”.

He added: “We will ensure that the next government, when elected, will hold the people responsible for this mess to account.”

Most of yesterday’s coverage of the ASA ruling – although not a column by Guardian columnist Aditya Chakrabortty, who first revealed the existence of the memo in May – ignored the role played by disabled activists.

ASA said the DWP adverts breached rules including those on misleading advertising, exaggeration, substantiation (proving claims are true), qualification (clarifying claims), and recognition of marketing communications (making it clear that adverts are not editorial).

Of four concerns that ASA examined, following 44 individual complaints, three were upheld and another was partially upheld.

ASA looked at six Metro newspaper adverts and one that was published online. The adverts included claims about how well UC worked, the five-week delay in new claimants receiving their first payment, and whether UC helped people move into work faster.

It told DWP that four of the newspaper adverts and the online advert should not appear in the same form again, and that the department must in future “ensure that they held adequate evidence to substantiate the claims in their advertising”.

Disabled activists have repeatedly warned that universal credit – which combines six income-related benefits into one – is “toxic” and “rotten to the core”, with “soaring” rates of sanctions and foodbank use in areas where it has been introduced, and have repeatedly warned about its impact on disabled people.

The boss of a homeless charity that provides services just a short walk from the Tory party conference in Manchester told party members last month that UC was causing early deaths, addiction, mental distress and suicides, with claimants “at the end of their tether”.

Marsha de Cordova, Labour’s shadow minister for disabled people, has previously described UC as “a cruel and inhumane system that has left many disabled people destitute, unable to heat and light their homes and going without food”.

She raised the misleading UC adverts in prime minister’s questions in May, on the same day that Professor Philip Alston, the UN’s special rapporteur on extreme poverty and human rights, had condemned UC and accused the government of being in a “state of denial” about the impact of its policies.

The prime minister at the time, Theresa May, dismissed de Cordova’s concerns, instead praising DWP staff for their work.

De Cordova said yesterday: “My constituents have been driven to despair by universal credit, but the Tories would prefer to spend money on PR than any real change.”

She said the Tory government had spent £225,000 on an “inaccurate PR stunt to cover up the failure of universal credit, which has pushed countless into destitution”.

Labour has promised to scrap UC if it wins power at next month’s general election.

Metro – which is run by the company that owns the Daily Mail – had refused by noon today to say if it would apologise to victims of universal credit for its actions, and if it would return the money it made from the adverts to the tax-payer.

DWP has so far refused to apologise or say if the senior civil servants responsible for the advertising campaign would resign.

But a DWP spokesperson said: “We are disappointed with this decision and have responded to the Advertising Standards Authority.

“We consulted at length with the ASA as we created the adverts, which have explained to hundreds of thousands of people how universal credit is helping more than 2.5 million people across the country.”