You are here: Home / Activism and Campaigning / Scope and Leonard Cheshire merger talks are met with scorn and concern 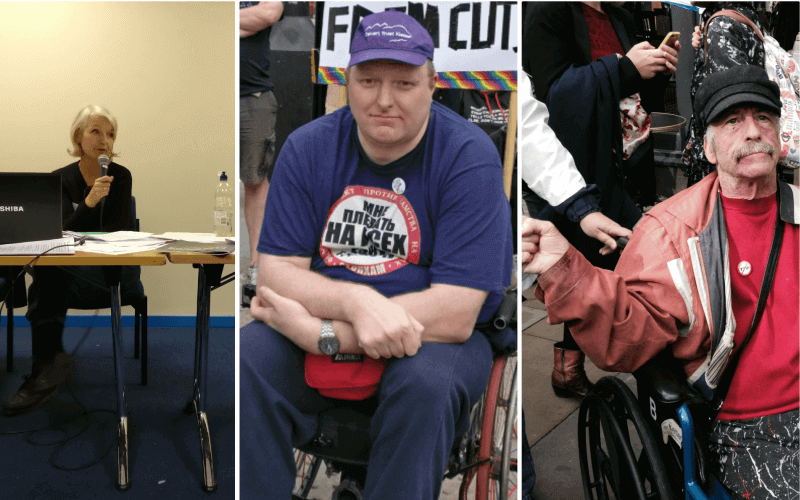 Disabled activists have dismissed talk of a possible merger between two of the country’s largest disability charities as a “rebranding” exercise that would only “shore up a failing business model”.

Scope and Leonard Cheshire this week denied reports – based apparently on leaked documents – that they were considering a merger, but both suggested that such an idea had been under consideration earlier this year.

Neither of them has ruled out the idea of a merger at a future stage.

The original reports, in the i newspaper, stated that the two charities had held talks earlier this year, and that a planned announcement of a merger next month was put on hold because of the pandemic.

Although both Leonard Cheshire and Scope have told Disability News Service (DNS) that they are not currently in merger talks, neither of them has denied that such an option had been under discussion.

A Leonard Cheshire spokesperson told DNS yesterday (Wednesday) that, earlier in the year, it had “explored a range of collaboration options with Scope and merger was discounted”.

He said the talks had taken place because they had “a long standing and close relationship” and were aimed at “maximising our organisations’ impact and reach”.

He said that, despite the financial impact of the pandemic, Leonard Cheshire was “in a very solid financial position with reserves of £109 million”.

A Scope spokesperson said it had “discounted a merger at this time”, but also did not rule it out in the future.

She said Scope’s income was “unavoidably hit” by the pandemic but that it had “managed to achieve strong cost savings through tough decisions” which had “stood the organisation in good stead going forward”.

Asked if Scope could survive without a merger, she said: “Whilst we all remain somewhat unclear of what lies ahead from the pandemic, we are well prepared, have healthy reserves and are confident that our early tough decisions have established a strong platform for Scope to face into the future.”

When DNS attempted to secure clarity on their answers, both charities refused to say if there had ever been a plan to announce a merger this autumn.

They also both refused to rule out further merger talks.

The response this week from a leading disabled people’s organisation and disabled activists with lived experience of the two organisations has been scathing and dismissive of the discussions and merger plans.

Tracey Lazard, chief executive of Inclusion London, said: “We suspect that the potential merger between Leonard Cheshire and Scope has everything to do with shoring up a failing business model and is nothing about serving the needs of disabled people.

“Far from being the effective agents of social change and the voice of disabled people as they claim, the big disability charities over the last decade have failed to marshal any opposition to the austerity measures that have had such a devastating impact on our communities.

“They have also failed to be allies of the disabled people’s rights movement and DPOs.

“Whether or not this particular merger goes ahead, there is no future for disability charities that continue to put their business model first and occupy the space that should be taken up by DPOs: organisations that are run and controlled by disabled people and that fearlessly speak truth to power.”

Bob Williams-Findlay, a former chair of the British Council of Disabled People, told DNS that the two charities had “a history of combining oppression and the exploitation of disabled people” and that he had reminded himself “how failing capitalist enterprises often seek to bail themselves out of trouble by rebranding their goods”.

He said: “Together these pillars of disablism will seek to rebrand themselves as the experts and voice of disabled people and suggest their breadth of knowledge places them centre stage, thus continuing their role of suppressing disabled people’s self-determination.

“Disability charities have always oppressed us, but today they steal our clothes, mimicking what we say and do publicly, whilst acting to disempower us at every turn for Judas money in the committee rooms of state departments.”

Williams-Findlay, who has written of the psychological abuse he was subjected to at a segregated school run by the Spastics Society, the charity that was later renamed Scope, said: “Am I totally against a merger? No, I would be happy to see them merge into a recyclable mass and then tossed into the dustbin of history.

“They symbolise a product of capitalism way past its sell-by date.”

Doug Paulley, who lives in a Leonard Cheshire home in Yorkshire and has publicly criticised the way the charity is run, said he believed a merged organisation could find it easier to take contracts away from smaller, user-led organisations.

He said he also believed that the two charities had approaches that were “incompatible” with each other, particularly since Scope had decided to sell off its segregated care homes and special schools, whereas Leonard Cheshire still runs scores of care homes across the UK.

He said: “I am not taken in by Scope’s claims about how user-oriented it is, but they seem to have at least claims of a different ethos. I don’t think the two are compatible.”

He said both organisations run “shiny” projects that are neither user-led nor empowering and there was a risk that a newly-merged organisation would want to become “the big charity that is the voice of disabled people”.

Three years ago, Scope took the decision to sell all its residential homes and special schools, and re-position itself as a “social change organisation”, a move apparently designed to distance the non-user-led charity from its roots as a provider of segregated services for disabled people.

In recent years, Scope has increasingly been the go-to disability charity for government ministers seeking supportive comments on new strategies affecting disabled people, and for the mainstream media seeking comments on disability-related issues.

Last year, Scope was one of the charities that supported prime minister Theresa May when she announced – in the dying days of her leadership – what she said were “new measures to break down barriers faced by disabled people”.

And, again last year, Scope hosted a speech by the then work and pensions secretary Amber Rudd about a series of reforms to the disability benefits assessment system.

Two years ago, it was one of the disability charities that confirmed that it had signed a contract connected to the government’s Work and Health Programme that included a clause preventing it bringing the Department for Work and Pensions (DWP) into disrepute.

The same year, Leonard Cheshire was accused of making “a complete mockery” of its supposed commitment to service-user involvement after it suddenly told residents of 17 of its care homes that it planned to sell them to other care providers.

It later faced questions from the care regulator after three former residents of another of its care homes died within a month of its sudden closure.