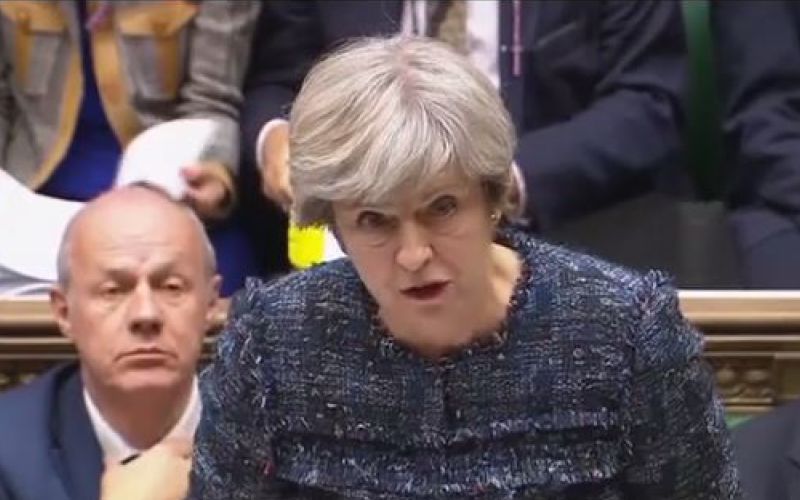 Disabled people’s organisations have reacted with suspicion and some hostility to the outgoing prime minister’s attempt to shore up her “legacy” with a series of disability-related announcements.

Although some of the measures announced by Theresa May (pictured) were welcomed, many user-led organisations questioned why she had left it until the last days of her time in office to launch what she said was a “new drive to tackle barriers faced by disabled people”.

In last October’s speech of more than 7,000 words to her party’s annual conference, May failed to make a single mention of disability or disabled people.

But this week, as she prepared to be replaced as prime minister by Boris Johnson or Jeremy Hunt later this summer, she announced a “new approach to disability”.

She failed to point out that the government has issued no updates or progress reports on its discredited Fulfilling Potential disability strategy since November 2015, eight months before she became prime minister.

Her “new approach” includes a pledge to publish new figures on “outcomes” for disabled people, but she failed to mention that the government has not published any updates to previous outcome figures since a Fulfilling Potential progress report in 2015.

That report revealed that the proportion of disabled people who said they frequently had choice and control over their lives plunged from 77 per cent in 2010 to just 66 per cent in 2013.

There was tentative approval this week from disabled people’s organisations (DPOs) to the announcement that the Office for Disability Issues (ODI) would move in November from the Department for Work and Pensions (DWP) to the Cabinet Office, as part of a new “equalities hub at the heart of government”.

But there were still concerns that this could see the government’s focus on disability equality further weakened.

May also announced that there would be another work and pensions green paper, focusing on disability benefits, as well as new rights for disabled employees to request workplace adjustments, and reform of statutory sick pay.

And there was a pledge from Justin Tomlinson, the minister for disabled people, that the government was now “committed to strengthening the evidence base on disability and to improve engagement with disabled people and disabled people’s organisations”.

In February, in a meeting with his predecessor, Sarah Newton, DPOs repeated their concerns at the government’s continuing failure to understand the principles around engagement with disabled people and DPOs, as laid out in the UN Convention on the Rights of Persons with Disabilities (UNCRPD).

Tomlinson also said the Department for Business, Energy and Industrial Strategy would “improve consumer outcomes for disabled people” by developing a measure of how well different companies “deliver for disabled customers in essential markets”.

One widely welcomed announcement this week was that the government could finally tighten mandatory accessibility standards on new housing, although this will still be subject to a consultation.

This is likely to mean changes to building regulations so that the optional M4(2) accessibility standard – a series of design criteria intended to make homes more easily adaptable for lifetime use – becomes instead a mandatory minimum standard for all new housing.

Only last October, housing secretary James Brokenshire ignored the crisis in accessible housing in his speech to the Tory party’s annual conference in Birmingham.

May also ignored the issue in her own conference speech, making no mention of the need to build homes to inclusive design standards, despite devoting a significant chunk of her speech to housing.

Brokenshire’s department had been criticised two months earlier by disabled campaigners and the equality watchdog after his new social housing green paper failed to include a single mention of the accessible housing crisis.

Number 10 had failed by noon today (Thursday) to say whether there will still be a separate disability unit as part of the hub.

It also failed to explain why the prime minister waited until shortly before leaving office to try to address the barriers facing disabled people.

The response from DPOs this week to May’s announcements was mixed, with some frustrated and even hostile over her attempts to secure a legacy with a series of last-minute pledges on disability that she herself will not be able to follow through on.

Tracey Lazard, chief executive of Inclusion London, said many of the announcements were “the re-starting of work the government should be doing but made a political decision to stop doing years ago, like the collection of data on disabled people’s outcomes”.

She welcomed the decision to move ODI away from DWP, but she said May failed to mention the need to develop a new disability equality strategy.

She said: “At a time when the UN found this government to be systematically violating disabled people’s human rights, when hundreds of thousands of us lost our independence and became prisoners in our homes because of devastating cuts to social care, when our community are amongst the most affected by the punitive welfare reform and when we continue to face discrimination on a daily basis and are unable to challenge it, we need much more than this.”

Professor Peter Beresford, co-chair of Shaping Our Lives, said May was trying to invent a legacy when she had been a “massive failure” as prime minister.

He said: “It’s good to see now that at her leaving, when she has no power, she has suddenly discovered a raft of policies that could benefit disabled people and reduce the exclusions and discrimination we face, which her government helped make worse.

“Now we positively know you just did nothing, despite knowing better.

“As it’s down to her successor to shape policy, we can imagine that her left-overs will carry little weight.”

She said: “May talks about the injustices disabled people face. The Tory government have caused the hostile environment disabled people are subjected to on a daily basis.

“This government are guilty of violating our human rights under UNCRPD and causing a human catastrophe in disabled people’s lives.

“This announcement is a huge insult to disabled people who are living in poverty due to this government and have become further marginalised in society.”

Kamran Mallick, chief executive of Disability Rights UK, said there was “much to be welcomed” in May’s statement, particularly the new “cross governmental approach to disability”.

But he said this “has to lead to real change in disabled people’s day to day experience.

“Too often we see fanfare announcements with very limited effect; they seem to wither into inconsequentiality when they are scrutinised for impact.”

He welcomed the housing, work and engagement announcements, but added: “Warm words around supporting disabled people to be part of our society cannot, do not and will not replace benefits and social care packages which have been slashed because of a paucity of resources.”

Brian Hilton, digital campaigns officer for Greater Manchester Coalition of Disabled People (GMCDP), said: “Whilst GMCDP welcomes any measures that improve opportunities for disabled people, we are yet to be convinced that these announcements will amount to any real positive changes.

“The more cynical amongst us might argue that this is a desperate attempt by a government in its final throes trying to paper over more than a decade of harsh and vindictive cuts rained down upon disabled people.”

He added: “GMCDP would be overjoyed if there was any real evidence of a commitment from central government to improving housing for disabled people, but sadly there is not.

“The government says it will consult on new measures, but the evidence is already available as to what is needed and that is action, not kicking the problem into the long grass of consultation and industry prevarication and extended implementation periods.

“What we need are ambitious targets that redress the current imbalance and significant fines for developers that fail to deliver.”

Hilton said GMCDP would engage with the government’s new equalities hub but, he said, “if they want to draw upon our skills, knowledge and experience we will insist on being reimbursed for our time”.

Disability Labour said the announcement was “a cynical ploy pretending to improve disabled people’s lives without looking at the root causes for our exclusion and increased death rate”.

Fran Springfield, Disability Labour’s co-chair, said: “What is needed is a reform of the benefits systems and the scrapping of universal credit so disabled people are not sanctioned or denied the right to benefits whilst they challenge the target driven refusal of their claim.

“The new ‘equalities hub’ sounds good on paper, but will it have enforcement powers?

“Will DPOs and disabled people really be involved and have their expertise respected and included in all decision making?

She added: “Will any of these policies actually be followed through by her successor or will they be quietly forgotten?

“Neither of the Tory candidates to be prime minister has a record of disability equality and inclusion.”

The Spinal Injuries Association welcomed the “new drive to tackle barriers faced by disabled people”, particularly through the plans for higher access standards for new housing, but a spokesperson said the proposals must be “backed up with appropriate resources”.

Among the areas not addressed by the prime minister, he said, were the problems caused by benefit cuts, “shortfalls in health and social care funding” and restrictions on Access to Work funding.