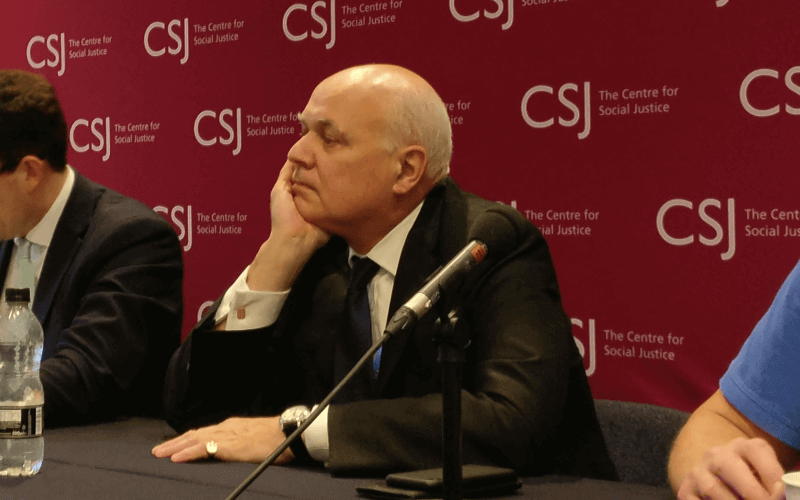 The right-wing thinktank responsible for designing universal credit has launched a new “Disability Commission” that it hopes will influence the government’s planned disability strategy.

At least half of the 12 commissioners, who will not be paid for their work, are disabled people, and several of them have publicly criticised government policy on disability in the last decade.

But there are likely to be concerns among disabled activists over the involvement of the Centre for Social Justice (CSJ), which was responsible for designing universal credit, and was founded by – and is still chaired by – Sir Iain Duncan Smith (pictured).

The implementation of universal credit has been linked to early deaths, addiction, mental distress and suicides, including the deaths of disabled claimants.

The boss of a homeless charity that provides services just a short walk from last year’s Tory party conference told party members then that universal credit had caused poverty levels that were “a throwback to the Victorian era”.

Years of evidence also show that decisions taken by Duncan Smith as work and pensions secretary between 2010 and 2016 – including those related to incapacity benefit reform – are closely linked to the deaths of many disabled benefit claimants.

Last year, DNS published a 12,000-word article calling for a criminal investigation into alleged misconduct in public office by Duncan Smith and other senior DWP figures.

CSJ is now claiming that its new Disability Commission will “secure a step change in the opportunities available to disabled people, especially in employment, to live their lives fully and as they want to”.

CSJ said it would do this by “influencing the development and implementation” of the government’s much-delayed cross-government disability strategy, but it has refused to say who is funding the commission, although it claims that its funders “have no editorial control over our work”.

CSJ plans an initial report later this year, which it hopes will feed into the government’s strategy, with three other reports next year designed to “influence its implementation and especially any subsequent legislation”.

The commission appears set to focus on the role of business, employment and the free market, with CSJ calling on the government to use the disability strategy to “prove that only a market economy delivers sustainable social justice in a way that enables everyone to realise their potential”.

The commission also includes inclusion experts from accounting and consultancy giants Deloitte and EY, and from law firm Clifford Chance, as well as David Forbes-Nixon, the founder of global asset management group Alcentra, its deputy chair.

Baroness Grey-Thompson – who was widely praised for a speech criticising the government’s “draconian” emergency coronavirus legislation in March – said she had joined CSJ’s commission because of the “desperate need” for new social security legislation, which had been delayed by Brexit and the coronavirus pandemic.

She said she had known Lord Shinkwin “a long time” and had sat with him on the National Disability Council, which was set up under the Disability Discrimination Act in 1995 (and later abolished when the Disability Rights Commission was established five years later).

She said: “The vast majority of my work is pan-disability and I’m very lucky I have a network of people with different impairments to speak to.

“I decided that with a massive change in how we operate (virtually) and we don’t know what the new world is going to be like, sitting around the table to be part of the discussion was important.”

Dolphin, who has also criticised past government social security reforms, said she had decided to join the commission because she wanted to “make a difference to the lives of disabled people” and that the main “driving force” for doing so was “the quality of the other commissioners and the important scope of the work”.

He said he hoped these recommendations for reform would “feature heavily in the Disability Commission’s thinking”.

He said he also hoped CSJ’s track record in influencing government policy would “prove extremely helpful” in ensuring these and other recommendations were included in the government’s Disability Strategy.

He added: “The bodies funding the CSJ will have no input into the commission or its recommendations, there are very strict editorial standards in place (and were they to try – not that they will – the commissioners would resist this with the utmost vehemence).”