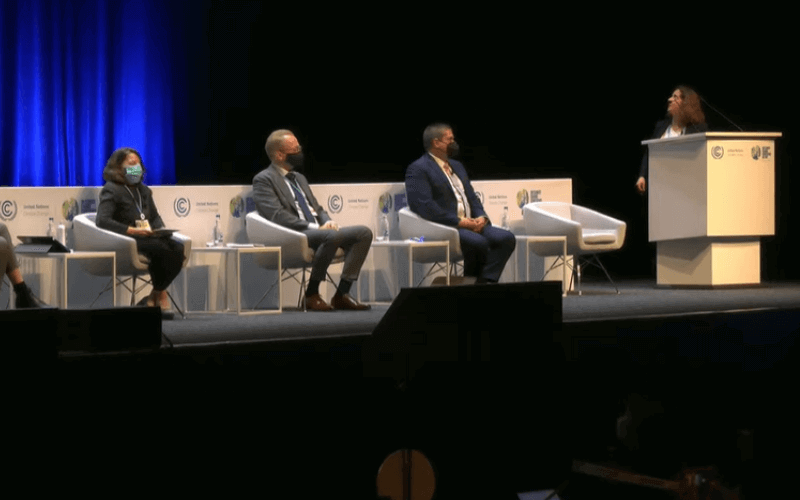 The UK government has admitted widespread and serious access failings at this month’s COP26 climate change conference in Glasgow.

As well as accepting that there have been problems with the accessible entrance to the conference, the UK government – which is hosting the event – has also admitted failing to provide sign language interpretation on broadcasts and webcasts.

Last week, the government said a “genuine mistake” was to blame for the Israeli energy minister, Karine Elharrar, a wheelchair-user, being left unable to access the conference venue on the first Monday of the conference.

But Disability News Service (DNS) has continued to collect evidence of further failings from disabled people who have attended the conference over the last fortnight.

They include concerns raised this week by Inclusion Scotland, which has described how the platform for an event that one of its disabled managers spoke at during COP26 was not accessible to those with mobility impairments (pictured).

Although none of the speakers at the event had a mobility impairment, they had not been asked in advance about their access requirements.

Inclusion Scotland had been promised that a livestream of the event, which focused on disability-inclusive climate action (see separate story), would be captioned, but it was not.

Inclusion Scotland also said that not all the electric shuttle buses used at the conference were wheelchair-accessible, while there was a failure to provide British Sign Language (BSL) interpretation for many of the events.

Susie Fitton, Inclusion Scotland’s policy manager, said the access failures at COP26 showed how disabled people are excluded or are not expected to participate in high-level discussions about climate action.

She said: “Disabled people have been systematically neglected in international, national and local responses to a changing climate.

“This is evidenced by buses being laid on to bring people to COP26 that are electric but not wheelchair accessible, or livestreams to side events being provided to enable remote participation that are not captioned for people with hearing impairments, or the total lack of BSL interpretation for many events at COP.

“What are we saying to disabled people by failing to provide these things? That we don’t expect them to have a seat at the table when we discuss climate change and that their rights, requirements for daily living and perspectives on climate action are not important enough to be an integral part of events like COP.

Jason Boberg, who has been attending COP26 on behalf of the SustainedAbility Disability and Climate Network, said there had been “massive issues” with the accessible entrance to the conference.

He pointed to poor signage, and the lack of information about the existence of an accessible entrance, which means “many people don’t know it exists, let alone where to go and what to do”.

He told DNS last night (Wednesday): “The accessible entrance is also the same as the ministerial entrance which makes it very difficult, as you have to argue with security that you’re meant to be there if you don’t meet their idea of looking like a high ranking official.

“This evening we came into the venue late and the accessible and ministerial entrance was locked with a chain, so to access it we had to demand for it to be opened and then step over a curb.

“We get harassed daily by the security who demand to see proof of disability before letting us through and who yell at us when they think we’re going the wrong way.

“It’s a degrading and demeaning start to what is an incredibly stressful situation fighting for our rights to be upheld in the context of climate change.”

He added: “It means we start every day with the brutal message that this space is not for us, and that we are not expected to be here.

“That does have an impact on the work and energy you’re able to bring to what is already an emotionally and physically taxing two weeks.

“It sets the scene for the conference, and it reminds us that in the climate safe future many people imagine, disabled people aren’t even in the picture.”

In the last week, the UK government has admitted for the first time that there were problems with both the lack of BSL interpretation on broadcasts and webcasts, and with the accessible entrance, although it has so far refused to answer other questions about its access failures.

In a statement, which it refused to clarify, a government spokesperson said: “BSL sign language was provided for the opening ceremony and we are working hard to rectify this and add BSL sign language to host broadcast for COP presidency press conferences and events as soon as possible.”

It refused to comment on the lack of captions, or on whether it had been warned before the conference about the access issues.

The statement was sent to DNS several days before the latest problems experienced by Boberg at the accessible entrance.

The spokesperson added: “We are committed to making this an inclusive and accessible summit.

“Our accessibility support desk is on hand to assist with any requests for assistance, and there are hearing loops available in conference and plenary rooms.”

But it has so far refused to provide any further information about the problems with the accessible entrance.

She said: “I could not believe that we had been totally ignored again.

“The government has failed us.

“I feel that having come this far, we need to hold the government to account, and let them know that our rights cannot be ignored.

“If we don’t fight to change the system, things will continue to be the way they are.

“So I have taken the decision to bring legal proceedings again, against the Cabinet Office.”

The Royal Association for Deaf people is supporting the legal action.

Vicky Foxcroft, Labour’s shadow minister for disabled people, said: “It is completely unacceptable that a series of accessibility failures have led to some disabled people being unable to access the COP26 venue.

“The lack of sign language or subtitles for anything other than the COP26 opening ceremony is also a big failure.

“Disabled people face these barriers every day and the UK government’s disability strategy does little to address them.

“We need to see clear actions from the government, not just words.”