You are here: Home / Benefits and Poverty / UN day of disabled people: Government could face court over universal credit 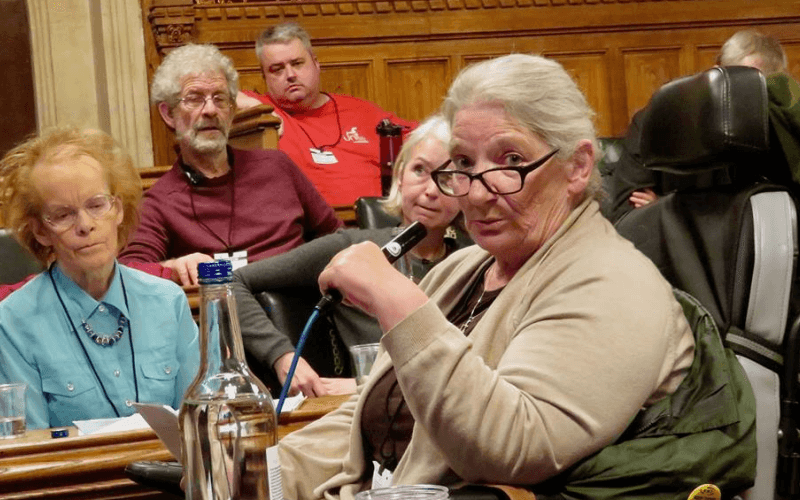 The government could be forced into court to defend its failure to make the much-criticised universal credit benefit system accessible to disabled people.

A parliamentary meeting held to mark the International Day of Persons with Disabilities (IDPD) on Monday – and to call for universal credit to be scrapped – heard that disabled campaigners are now seeking claimants willing to help challenge the government’s apparent breach of equality laws.

Inclusion London’s Disability Justice Project (DJP) is considering various possible legal challenges, which could include the failure of jobcentres to make the process accessible for disabled people forced to apply for universal credit, and the failure to assess the impact of the system on disabled people.

Another possible legal challenge could address how the rollout of universal credit has led to disabled people losing accessible housing, or not being able to secure housing that meets their access needs.

DJP is also examining the impact of sanctions and conditions imposed on disabled people through universal credit and whether that could form the basis of a legal action.

Tracey Lazard, chief executive of Inclusion London, and also representing the Reclaiming Our Futures Alliance, told the parliamentary meeting that it was a “disgrace” that the government had never carried out an equality impact assessment of the universal credit system, even though it “disproportionately affects disabled people”.

She said universal credit was “fundamentally inaccessible”, with an online system that appeared to have been designed to exclude hundreds of thousands of people from using it, and which disregarded the many disabled people who have never used the internet, and the hundreds of thousands who only have sporadic online access.

She added: “We also happen to think it is legally challengeable under the Equality Act, so we are looking for people who might be interested in making that challenge*.”

Lazard said she could not think of a better event to mark IDPD because universal credit provided a “live, current danger to disabled people now” and despite recent government concessions it “continues to be devastatingly unfit for purpose”.

She said: “Rather than motivating people into work, as this government claims, there is now irrefutable evidence that this hostile and threatening use of sanctions and conditionality is deeply damaging.”

She said there was a “growing number of deaths linked to universal credit” and “widespread experience of a downward spiral of sanctions, debt, food and fuel poverty”, and even destitution, and a regime that was “instilling terror and anxiety in hundreds of thousands of disabled people”.

Lazard said universal credit had been “ideologically designed” to be “punitive and hostile”, and she said disabled people must “refuse to be guinea pigs” in the government’s “ideological experiment”.

The event was organised by the TUC disabled workers’ committee, Unite the union and Disabled People Against Cuts, and was hosted by Labour’s shadow minister for disabled people, Marsha de Cordova.

Dave Allan, chair of the national disabled members’ committee of Unite, reminded the meeting that the annual TUC Congress unanimously approved a motion he had moved in September that called on the Labour party to shift its stance on universal credit and promise to scrap the system.

Labour’s policy is currently to simply “pause and fix” universal credit rather than scrapping it.

The motion had previously been approved by disabled trade unionists at May’s TUC Disabled Workers’ Conference.

Allan said there was a need for a broad alliance to “put massive pressure” on the government to scrap universal credit.

But he said there was also a need to pressure Labour’s frontbench to commit to scrapping universal credit.

She said people were finding themselves “trapped in a cycle of assessment, rejection and appeals”, and she said the assessment system was “particularly unsuitable for people in mental distress”.

NSUN has been collecting individual accounts of the impact of universal credit.

One woman has told NSUN how the fear of disability cuts over the last two years had given her the most severe mental breakdown she had had in 44 years, involving eight months of illness, six weeks in a psychiatric unit and six months of recovery, which was ongoing.

She told NSUN: “Now my biggest fear has been realised. The Department for Work and Pensions has cut all my disability payments and with two weeks’ notice.”

Everything carefully built up over the last 17 years of self-management to provide some form of stability “has been taken away within two weeks”, she said, and added: “I don’t know where to turn, I’m in despair and in great danger of another major relapse. I have felt suicidal.”

Gould said NSUN was urgently calling on the government to address the “trauma and injustice” caused both by universal credit and people’s experience of the Mental Health Act (see separate story).

Dr Liz Okokon, co-disability officer and women’s officer for Dulwich and West Norwood Labour party and a Unite activist, who works in the NHS, said it was important to feel “positive and hopeful” because “so many people are not going to give up and give in”.

She said: “We can do something about this, we can make a difference, we can change.

“There are dreadful stories but [we should remember] the fact that we have our trade union movement behind us, activists from all corners behind us.”

She pointed out how the telling of individual stories of the Windrush scandal had brought it to the mass media.

She said: “Telling these stories really is really important.

“We must remember that we are valued as people, not just as commodities, not just those who will go out and bring in a couple of tax dollars.

“We have value as people and we need society to remember all of us have value, and not just how many cogs we can put on a wheel.”

Miriam Binder (pictured), from Disabled People Against Cuts, said it was important to recognise that universal credit was being introduced “at a time of unprecedented cuts in our social infrastructure”.

She said: “The whole universal credit process is essentially draconian and not fit for purpose.

“It is punitive and takes no heed of the personal circumstances of those who are obliged to turn to it.

She added: “It needs to be stopped and scrapped. No ifs, ands or buts about it.”

The parliamentary event came just two days after a national day of action by Unite against universal credit saw 90 different actions across the country.

He said universal credit was an “atrocious social policy” that had already killed “innumerable people” and activists needed to discuss the campaign to scrap universal credit with constituency Labour parties and trade unions.

He said there would not be a formal campaigning alliance but groups needed to work together, including disabled people’s organisations and other grassroots groups, to push for universal credit to be scrapped under a Labour government.

*Disabled people who have ongoing problems or concerns with universal credit or have had problems in the last couple of months, and are interested in a potential legal challenge on these or other grounds, can contact Svetlana Kotova at Inclusion London by emailing: [email protected] although Inclusion London cannot offer advice on individual claims.