You are here: Home / Transport / Watchdog to launch project to fund legal actions on transport discrimination

The equality watchdog is to launch a new project that will provide funding for disabled and older people to take legal action when they have faced discrimination on public transport.

The fund has not yet been officially launched by the Equality and Human Rights Commission (EHRC), but it has approached disability organisations and other stakeholders about the project.

It would see EHRC providing funding to pay a solicitor or barrister to represent older or disabled people who would not otherwise be able to afford to pursue legal action against transport providers under the Equality Act.

One of EHRC’s priority aims for this year, as laid out in its annual business plan (PDF), is to ensure that public transport “supports the economic and social inclusion of disabled people and older people”.

The project is believed to be linked to this aim and its pledge to support at least 25 legal cases “which resolve issues for the individuals”, and to use information from these cases to influence its policy work.

The plans have already won support from key disabled campaigners, despite opposition from Stephen Brookes, the government’s disability champion for the rail sector and a Disability Rights UK (DR UK) ambassador.

Brookes criticised the plans in a post on the DR UK website, before later confirming his concerns to Disability News Service.

He said he had told EHRC that legal action should only be taken when all other avenues, such as complaints to the transport company, and then to the ombudsman, had failed.

He said: “Litigation should be the final recourse if you don’t get satisfaction from the normal procedures.

“I want a long-term solution and not a quick fix.”

But the post on the DR UK site was later removed, with EHRC saying it had been posted “in error”, while DR UK stressed that it supported the EHRC project.

Doug Paulley, who has taken multiple successful legal actions against public transport companies for disability discrimination, securing important gains for disabled transport-users, including one which secured a victory in the Supreme Court, also supported EHRC’s plans.

He said he “fundamentally and strongly” disagreed with Brookes.

He said: “Complaints don’t always make it to the relevant people who can actually ‘do something’ at the company.

“I can think of multiple occasions where the contracted-out customer relations system has shielded those with the power and control from the content of the complaint.

“Legal action can be effective at cutting through the customer relations barrier, to those with real management responsibilities who have often thanked me for doing so as otherwise they would be totally unaware of the passenger experience in question.”

Paulley said the rail ombudsman had only a limited role and was “very consumer oriented” and failed to achieve industry change.

He added: “Disability discrimination, including service failures in disability provision and other failures to make reasonable adjustments, are not failures in customer service provision.

“They are illegal and should be treated as such.”

Paulley also pointed out that going through the complaints and ombudsman processes cut into the short period of time allowed for taking a discrimination case under the Equality Act, which was usually just six months.

He said: “Disabled people are persistently frustrated in their efforts to use public transport, in part because of the failure of transport providers to meet their responsibilities under equalities legislation.

“We’d encourage disabled people to use all the policies and procedures available to them, such as complaints systems, if they are denied the services they should be able to use.

“That includes pointing out where there have been breaches of legislation.”

He added: “We are of course happy to have a dialogue with any transport provider seeking to improve the experience of disabled customers.

“But we’re often fobbed off with shallow excuses and lightweight apologies. It’s down to transport providers to ensure they comply with the law.

“Any individual should be able to take legal action as and when need be.”

Transport for All (TfA), the user-led charity which campaigns on accessible transport in London, also supported they new EHRC project.

Kirsty Hoyle, TfA’s chief executive, said: “Transport for All are pleased that the EHRC are taking the rights of disabled and older people to access transport seriously and commend the decision to both commit to this in their recent policy and to set up a
funded project intended to support their aims.

“We work closely with the transport sector: providing training, consultancy and as a critical friend, and we believe that many issues can and are remedied without the
need for legal action.

“But we also believe that it is essential that D/deaf, disabled and older people get good legal advice and support to challenge discrimination when it happens.

“This project will do exactly this and we will continue utilising all the mechanisms available to us to tackle the repeated instances of discrimination that are reported to Transport for All every day.

“This benefits the transport sector too – who we know want to understand and comply with the law and we hope want to strive to be beacons of good practice – particularly as London and the UK are starting to fall behind in terms of access to transport.

An EHRC spokesperson declined to provide further details about the project.

But she said: “We have spoken to a variety of stakeholders and taken their comments on board. We will be releasing more details about the project soon.”

Picture: Doug Paulley (left) and his solicitor Chris Fry in front of the Supreme Court after his discrimination victory over First Bus in 2017, surrounded by supporters from Transport for All 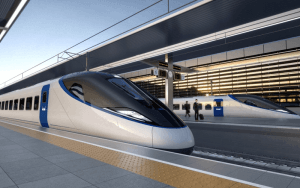