You are here: Home / Transport / Call for watchdog to act on rail staffing to prevent ‘human rights crisis’ 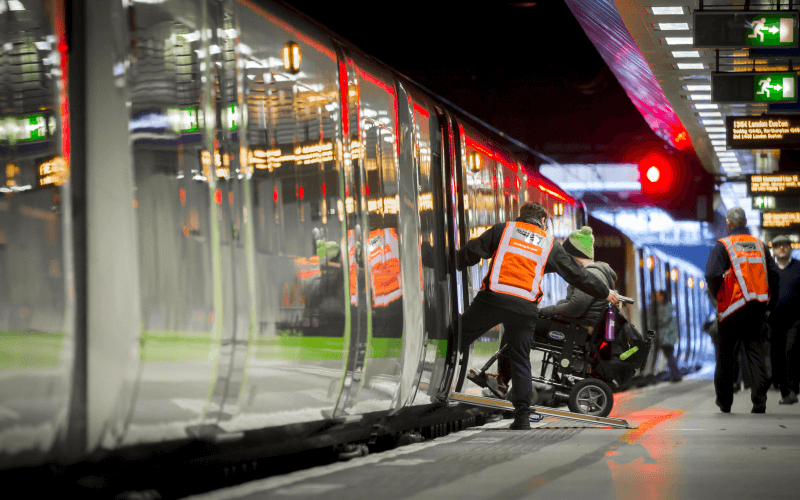 Campaigners have called on the equality watchdog to take “urgent action” to prevent an “escalating human rights crisis” for disabled passengers, caused by staffing issues on Britain’s rail system.

They say reports that the government plans mass ticket office closures mean this could be the last chance to act on rail accessibility, which they believe is in a “state of national emergency”.

Their letter comes three years after the Equality and Human Rights Commission (EHRC) warned train operators about destaffing and set up a legal fund for victims of discrimination on public transport.

EHRC had also warned the government and train companies earlier in 2019 that the move towards running more trains without a member of customer services staff on board – driver-only operated trains – and an increase in unstaffed stations, as well as the need for many disabled rail passengers to book assistance before their journeys, could be breaching the Equality Act.

But yesterday’s letter says the government has ignored EHRC’s warnings.

The letter says: “Disabled people’s right to independent living is now under greater threat than ever, due to planned government cuts to railway staffing, a key driver of the industrial dispute ongoing across the country.”

It calls on the government to take measures that will guarantee “turn up and go” unbooked assistance for all disabled people at all locations on the rail network.

A string of disabled activists, campaigners and allies have signed the letter, which was put together by the Association of British Commuters (ABC).

Among those who have signed it are Ann Bates, a transport access consultant and former rail chair of the Disabled Persons Transport Advisory Committee (DPTAC); Andrew Hodgson, president of the National Federation of the Blind of the UK (NFBUK); Jan Shortt, general secretary of the National Pensioners Convention; and Paula Peters, a member of the national steering group of Disabled People Against Cuts (DPAC).

It has also been signed by Professor Philip Alston, a human rights lawyer and a former special rapporteur on extreme poverty and human rights for the UN.

ABC, and its co-founder Emily Yates, have been behind a series of revelations in recent weeks that have shown how DPTAC, the government’s accessible transport advisers, has been raising serious concerns with ministers over the accessibility of the rail network.

One document secured by ABC showed how staffing levels on a section of the rail network were “completely inadequate to deliver an accessible railway”.

This week’s letter says the government is continuing to allow rail companies to run unstaffed trains to unstaffed stations, which means there is no assistance available to help disabled passengers board and exit trains.

It points to a report in the Sunday Times last month which claimed that 980 ticket offices in England were to be closed or “repurposed” as part of the government’s reported £2 billion cuts to annual railway spending.

The letter adds: “In the absence of any evidence to the contrary, the further destaffing of trains and stations is sure to follow; increasing the impact of the existing discriminatory staffing policies on Britain’s railway.”

It calls for EHRC to demand “full transparency” from the government about its rail staffing plans, and a public consultation.

And it says the watchdog should consult and then feed into a report being prepared by the UN special rapporteur on the rights of disabled people, Gerard Quinn.

Quinn is seeking evidence from around the world on innovation in the design and delivery of those services that “underpin the right to live independently and be included in the community”.

The letter calls on EHRC to “work proactively with the UN to encourage a permanent, joint approach to disabled people’s fundamental right to public transport”.

Bates said: “True ‘modernisation’ would mean an inclusive railway that supports disabled people’s right to independent living – not staffing cuts that ignore the needs not only of disabled people, but also a large proportion of the travelling public.”

Hodgson said: “NFBUK urges the government and rail industry to heed the warnings of human rights experts that the destaffing of stations and trains will lead to blind, partially-sighted and deafblind people losing the access and confidence to travel on our railways.”

And Bob Ellard, a member of DPAC’s national steering group, said: “Ticket offices provide an essential service for many disabled people who can’t access online ticketing nor use machines.

“Closure and loss of assistance staff on stations would mean loss of access to train travel for these people – it cannot be allowed to happen.

“The EHRC must step in and prevent this national crisis in rail accessibility and disability rights.”

An EHRC spokesperson said: “We are committed to upholding disabled people’s right to equal travel and know many disabled or older passengers rely on station staff and ticket offices to access rail services.

“We are carefully considering the association’s letter and will respond in due course.”

The Department for Transport had not commented by 11am today (Thursday).

Picture by the Office of Rail and Road