You are here: Home / Independent Living / Council confesses: ‘We have no idea how many of our buildings are accessible’ 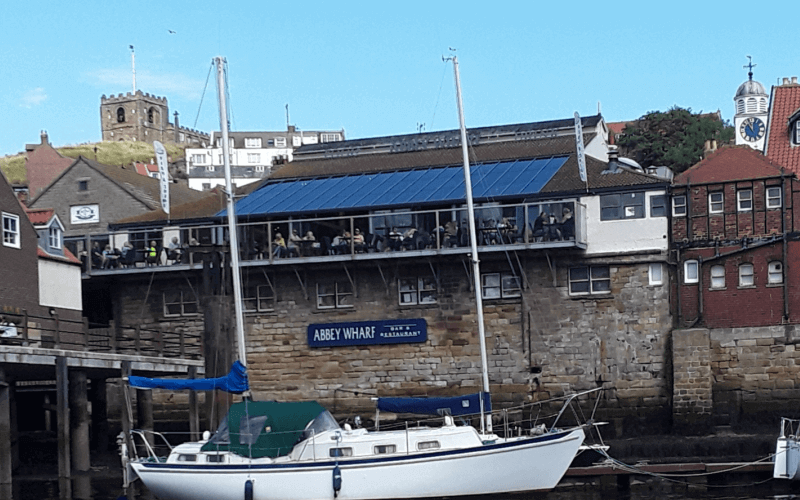 A local council has admitted that it has no idea how many of the buildings it owns and rents to businesses are accessible to disabled people.

The admission by Scarborough council came after it refused to force a restaurant and bar to keep to the terms of its lease, despite the new business removing a stairlift during a major refurbishment of an iconic council-owned property, and then failing to replace or improve it.

The building now occupied by Abbey Wharf (pictured) in Whitby – overlooking the harbour – is owned by the council but the business it had rented the building to failed to keep to the terms of its lease by ensuring there was access for disabled people after a major refurbishment.

Instead, the owners of the north Yorkshire business stripped out the stairlift but failed to install a replacement lift.

Because of the council’s refusal to pressure its new tenant to ensure access for wheelchair-users and others with mobility impairments, disabled campaigner Ian Lawson was forced to take legal action himself.

With the help of barrister Catherine Casserley, an expert on disability discrimination, Lawson won his case.

York County Court ruled in March that Abbey Wharf had discriminated against Lawson by failing to make reasonable adjustments under the Equality Act.

It will now have to install a new platform lift, and pay Lawson damages of £7,500, although nearly all of that will be swallowed up by the costs of bringing the case.

But Lawson was so frustrated by Scarborough council’s failure to pressure Abbey Wharf to ensure the building was accessible, that after winning the case he also submitted a freedom of information request to the local authority to discover how many other buildings it owned were not accessible.

In its response, the council said it had 1,824 tenancies, but it was not clear from the response how many of these were buildings open to the public as many of them were “wayleave and easement agreements, rights of way and licences”.

But Lawson was also told that the council had no idea how many of the buildings it owns and leases to tenants – and which are open to the public – were wheelchair-accessible, and how many of them had an accessible toilet.

It also told Lawson in its freedom of information response that it “does not have the resources” to “proactively police” its properties to ensure they comply with relevant legislation such as the Equality Act.

A council spokesperson claimed the duties under the Equality Act fell to the tenant as the service-provider and it was “therefore up to the tenant to make any reasonable alterations”.

She said: “This is the reason Mr Lawson has taken our tenant to court over this matter and not the council as landlord.

“We are however working co-operatively with the tenant to ensure that the order of the court can be complied with.”

Asked how the council justified having no idea how many of its tenanted buildings were wheelchair-accessible, she said: “As service providers are responsible for complying with the [Equality Act], in very broad terms the intention of any commercial lease is therefore to also put the onus of complying with all relevant legislation on the tenant.

“It is the service, not necessarily the building, that must be accessible.

“Where a tenant identifies the need to modify the building in order to provide their service, we will co-operate with them to allow the relevant adaptations.”

Disability News Service (DNS) also asked the council how it justified stating that it could not afford to “proactively police” its properties to ensure they were accessible.

A council spokesperson said: “Where it is brought to our attention that our tenants of commercial premises are potentially in breach of the Equality Act 2010 (eg because of a lack of adequate physical access to the premises), we will take steps to address it by drawing it to the attention of the tenant and, where required, providing the necessary landlord’s consent to enable the tenant to comply with their obligations.”

But Lawson, who campaigns for access improvements in north Yorkshire, said: “Ten years [since the Equality Act was passed by parliament] is far too long to ignore the law for any organisation, particularly as new tenancies, periodic rent reviews and site visits provide ample opportunity for the council to check on the access features provided by all of its tenants.”

He said the council’s public sector equality duty, under the Equality Act, meant it must have “due regard” to the need to eliminate discrimination, advance equality of opportunity, and encourage social contact between non-disabled and disabled people, none of which the council had met in dealing with his concerns about Abbey Wharf.

He said he believed the council’s comment that it was “the service, not necessarily the building, that must be accessible” was “a nonsensical comment that could only come from a person with no understanding of the difficulties that disabled people face in the built environment”.

Lawson added: “As I made frequent requests to the council so that I could avoid the stress, anxiety and financial risk of losing the claim, their response appears to suggest that they believe that they did as much as they could do.

“However, the council can serve a notice to correct a breach of the lease within 14 days, yet the council did not do so when I asked them to serve that notice, long before the claim went to court.”

Abbey Wharf had failed to comment by noon today (Thursday).