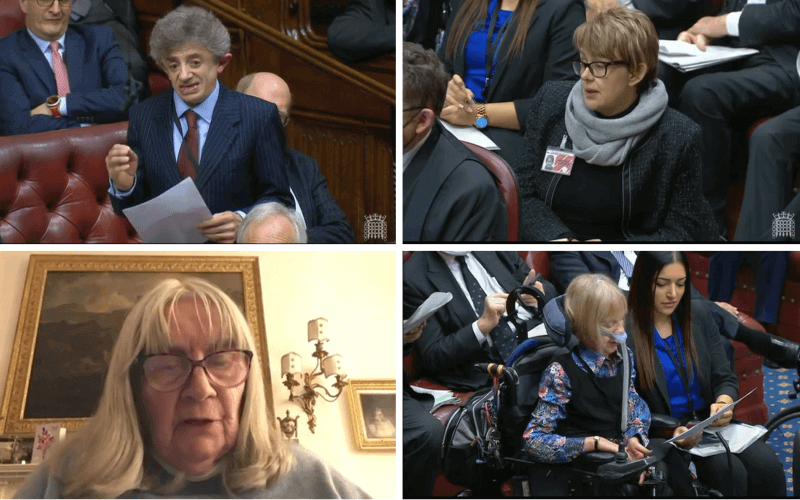 Four disabled peers have helped defeat attempts to hijack the government’s health and care bill and use it to secure a change in the law to legalise assisted suicide.

The Conservative peer Lord Forsyth, a former secretary of state for Scotland, had proposed an amendment to the bill that would have forced the health and social care secretary to publish a draft bill that would “permit terminally ill, mentally competent adults legally to end their own lives with medical assistance”.

But his amendment was defeated last night (Wednesday) by 179 to 145 votes, after speeches opposing it by four disabled peers, the crossbenchers Baroness [Jane] Campbell, Baroness [Tanni] Grey-Thompson and Baroness [Susan] Masham, and the Conservative Lord [Kevin] Shinkwin.

A separate attempt at legalisation, through Baroness Meacher’s private members’ bill, is still alive but is thought certain to fail because of a lack of time for its next stage in the Lords.

Baroness Campbell, who made a rare appearance in person in the Lords to speak against the amendment, following months of contributing virtually as she shielded from the pandemic, told fellow peers that opening the door to legalisation “would be a monumental change in the criminal law with potentially lethal consequences”.

She said that using the health and care bill to “force the government’s hand” was “a blatant manipulation of the parliamentary process” and set “a dangerous precedent and should be resisted”.

She said: “This is the wrong bill, the wrong time and the wrong way in which to debate one of the most fundamental issues that we face as a society.”

Baroness Grey-Thompson said hundreds of people – from both sides of the argument – had written to her about the amendment, which would – if passed – “fundamentally change the political and societal landscape for disabled people”.

She said: “If people have not read it, they should look at the article by… Lord Shinkwin this weekend about how disabled people are encouraged to think that they would be better off dead than live with an impairment.

“Even in this chamber, we hear about things such as incapacity and incontinence and all the things that people fear.

She added: “For all those arguing in favour of this tonight, I really look forward to them supporting my private members’ bills asking for things such as good education, work, social care and access to trains, which are the things for which disabled people are arguing.

Baroness Masham said that many disabled and older people were frightened by the prospect of legalised assisted suicide.

“Whatever… Lord Forsyth says, this bill should be about care, not killing. There should be compassion and palliative care for all those people who need it.”

Baroness Brinton, who spoke in favour of Lord Forsyth’s amendment, said it would not actually change the law on assisted suicide.

Instead, she said, it would “ensure that some proper parliamentary time is made available, as in Scotland, within 12 months of the bill passing into law, to ensure that there can be a planned and proper debate with the wider public and with MPs and peers that is just not possible in the private members’ bill process that we have in our parliament”.

But Lord Shinkwin told fellow peers: “If this amendment were passed tonight, I firmly believe that in years to come, we would look back and say that today – 16 March 2022 – was a pivotal moment.”

He described how he had been rushed to hospital seven weeks ago for an urgent blood transfusion, and had experienced “unbelievable pain”, helplessness and an “acute sense of vulnerability”.

“The answer is unquestionably no.

“In the culture to which this amendment would inexorably give rise, with its nuanced assumption that my impaired quality of life somehow made my life less worth living, would I still be here? I do not know.”