The Department for Work and Pensions (DWP) is mired in a dirty tricks row after an anonymous comment that mirrored tabloid scrounger rhetoric – and attacked a disabled former Labour MP – was sent from a computer just yards from its headquarters.

The comment was posted on the Disability News Service (DNS) website, in response to an interview with Dame Anne Begg, who lost her seat in this month’s general election.

In the interview, Dame Anne was heavily critical of the Conservative party and Tory work and pensions secretary Iain Duncan Smith, and said she feared that disabled people would bear the brunt of a new wave of cuts to the social security budget, with the Conservative manifesto pledging another £12 billion a year in “savings”.

Throughout the last parliament, Dame Anne was chair of the Commons work and pensions select committee, whose reports held DWP and Duncan Smith to account over the coalition’s welfare reforms.

And last week she tweeted a link to a Guardian news report on Iain Duncan Smith being reappointed as work and pensions secretary, and therefore in charge of plans to cut £12 billion from the benefits bill, adding her own comment: “Be afraid. Be very afraid.”

Two days after the interview with Dame Anne was posted on the DNS website, a comment appeared from a reader who called himself/herself “Joshie Bhoy”.

“Joshie” complained that the definition of a disabled person had now changed and that “even gangs of vagrant drunks and drug addicts get extra benefits as they are apparently ‘disabled’ which makes a mockery of the system”.

He/she said the incapacity benefits system was “now widely abused” and that the claimant count had “soared” under Labour to its present “unaffordable level”.

“Joshie” added: “Hopefully once the deficit is paid there will be more money available [for] those who are genuine and in need…

“She is just pissed off that she is now off the gravy train like all the others who lost their seats but suspect she will still shop at M&S as opposed to Lidl or Aldi.”

Because some of the comments closely mirrored Tory policy and the language used by right-wing commentators and politicians, DNS checked the location of the computer from which the message was sent.

This showed that it appeared to have been sent from Methodist Central Hall, which has a large public cafeteria and is next-door to DWP’s Westminster headquarters in Tothill Street.

The search also shows that the comment was made on a computer using wireless broadband, suggesting that it was sent from a laptop by someone visiting the building.

“Joshie Bhoy” has so far not responded to an email from DNS, and has posted no further comments on the website.

Dame Anne said: “I have had far worse abuse than that. I obviously don’t agree with the analysis.”

The DWP press office was asked to comment, but is currently refusing to respond to questions from DNS. 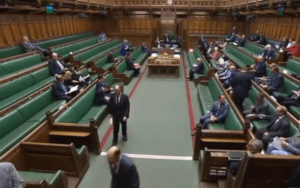 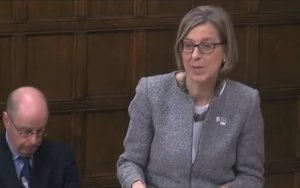