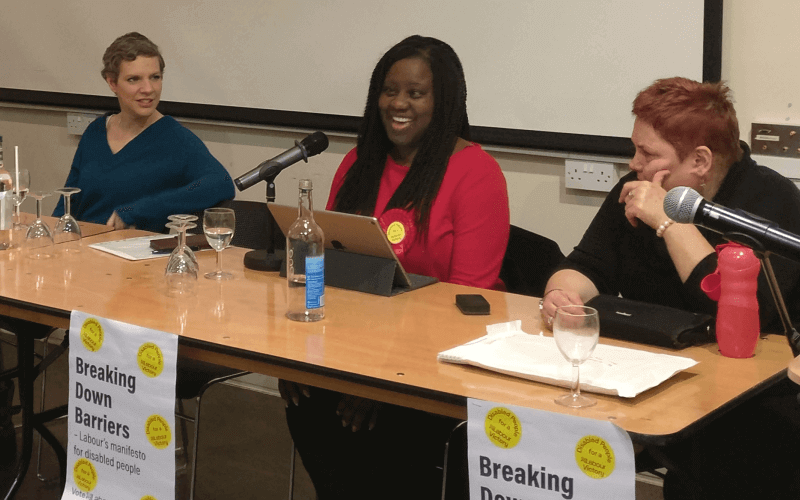 The shadow minister for disabled people has pledged at a public rally that a Labour government would hold an inquiry into the deaths of disabled people that have been linked to Department for Work and Pensions (DWP) failings.

It is the first time that a Labour figure has publicly pledged to hold such an inquiry if it wins power, other than in comments made to Disability News Service (DNS).

Marsha de Cordova told a rally of disabled Labour supporters in central London on Monday that she was proud that her party had supported the Justice for Jodey Whiting petition, which itself had called for an inquiry into DWP-related deaths, and for any evidence of misconduct by civil servants and ministers to be passed to the police.

She said that both she and Labour’s shadow chancellor, John McDonnell, who also spoke at the rally (see separate story), had signed the petition.

De Cordova (pictured, centre, at the rally) said: “In government, we will make sure that that inquiry happens because it needs to happen because justice needs to be done.”

Although the inquiry pledge was not included in the party’s main manifesto, or even its disability manifesto, Labour has twice told DNS that it would be set up if it wins power tomorrow (Thursday), and a source has said the inquiry would examine the period from the introduction of universal credit in April 2013 to the end of this year.

Its remit would include examining the causes of deaths linked to DWP assessments.

The deaths of Paul Donnachie, Mark Wood, David Barr, Lawrence Bond, David Clapson, Susan Roberts, Alan McArdle, James Oliver, Michael O’Sullivan and Jodey Whiting – and many others – have all been linked to the failings of DWP and its contractors in the last seven years.

De Cordova told the rally that there had been a “systematic erosion of the rights of disabled people” in the last decade of Tory-led governments, including their rights to access public services.

She said: “We have fallen victim to that right-wing narrative that sees us as burdens to society rather than the citizens that we are with values and with potential and with respect.

“This is how this Tory government has created a hostile environment for disabled people.”

She pointed to repeated criticism of the UK’s disability rights record by the UN, which she said was “shameful” and “a shocking indictment of their austerity programme”.

And she said that this austerity programme was responsible for the deaths of more than 100,000 people and that a Labour government was “the only chance we have to end that hostile environment”.

De Cordova said the party’s disability manifesto, Breaking Down Barriers, committed a Labour government to “build a society according to the social model of disability” by removing barriers facing disabled people in areas such as accessing social security, education, transport, employment, housing and independent living.

This will include working with disabled people to co-produce a replacement for the system of disability benefit assessments, with assessments carried out “in-house” – instead of by private sector contractors like Atos, Capita and Maximus – and through a “humane system to ensure we receive the support we are entitled to”.

And she said a Labour government would incorporate the UN Convention on the Rights of Persons with Disabilities into UK law.

She said: “I know that is going to be a huge challenge but we are committed to doing that, working with disabled people to ensure that we achieve this.”

De Cordova added: “Above all, a Labour government will ensure that nothing about us is going to be done without us, empowering disabled people and enhancing our voices.

“In a Labour government, every policy decision, every pledge, we will be co-producing with and for disabled people.”