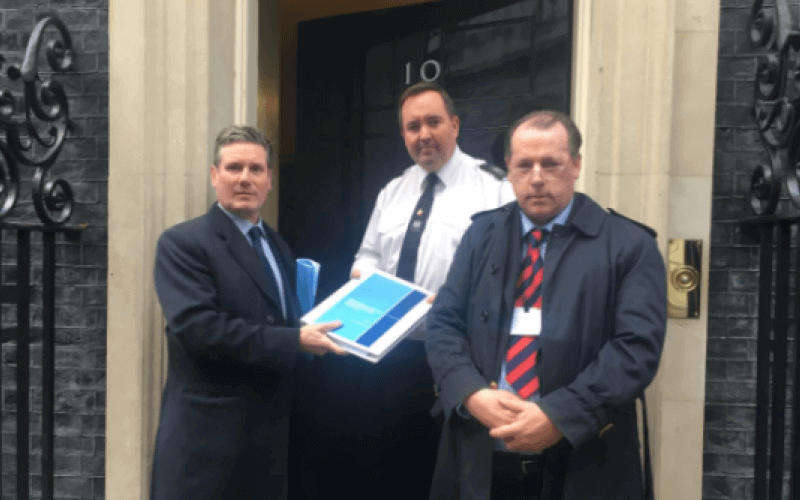 A company paid to assess disabled people’s fitness for work was put under “immense pressure” by the Department for Work and Pensions (DWP) to find claimants ineligible for out-of-work disability benefits, official records have revealed.

DWP has insisted for years that there was no such pressure placed on Atos Healthcare, the controversial outsourcing giant, to find disabled people fit for work and therefore not eligible for employment and support allowance (ESA).

But a new document unearthed by the family of Michael O’Sullivan, a disabled man who took his own life after being found unfairly fit for work, shows that an Atos doctor made it clear that DWP was partly to blame for the decision to find him ineligible.

Michael O’Sullivan’s death in September 2013 led to a coroner blaming failings in the notorious work capability assessment (WCA) system for his death, and writing to DWP to request urgent changes to prevent further deaths.

Those changes were never made, and further deaths have continued to be linked to the WCA over the last five years.

The claim was contained in evidence provided to the General Medical Council (GMC) nearly three years ago when it was investigating complaints about Dr Fathy Awad Sherif, the orthopaedic surgeon who carried out the face-to-face assessment of Michael O’Sullivan in March 2013.

The doctor’s representatives told GMC investigators: “Following the conversion of Incapacity Benefit to ESA, the DWP put immense pressure on ATOS disability analysts to deem claimants fit for work when they previously would have qualified for benefits.”

Atos has never publicly made any such statement, and DWP has always denied placing pressure on the company and its assessors to find claimants fit for work.

Disability News Service (DNS) has revealed how ministers allowed the rollout of the WCA to hundreds of thousands of long-term IB claimants – including Michael O’Sullivan – to begin in 2011 despite ministers being warned by another coroner in 2010 that the assessment was a threat to their lives (see DNS investigation, published this week).

Dr Sherif’s representatives also told GMC in their evidence that Atos assessors, who “had no formal psychiatric training”, were not required by DWP to use a medical tool that evaluates the severity of a person’s depression.

They also claimed that the criteria applied during WCAs had been “altered” by DWP to make it more difficult for claimants to be found eligible for ESA.

Michael O’Sullivan’s family have been supported in their investigation by their local MP, Labour’s Sir Keir Starmer, and welfare rights expert Nick Dilworth, who have all spent years piecing together a case against DWP and Atos.

That investigation continues, and they say most of the evidence shows serious and systematic failures by DWP.

But they are frustrated and angry with Atos that until this week it had failed to respond to a detailed complaint that was lodged with the company in January this year.

They had previously expected DWP to deal with all aspects of their lengthy complaint, as Atos was carrying out the assessments on its behalf, but they were told last year by the department that they needed to lodge a separate complaint with the company.

They believe that DWP, Atos and Dr Sherif had a flawed misunderstanding of their duty of care and so failed to apply it when providing Michael O’Sullivan with medical assessment and employment-seeking services while under their care.

Dilworth said: “The O’Sullivan complaint has involved a meticulous investigation into every aspect of how Michael’s claim was handled by the DWP and Atos.

“The work is, of necessity, focused on establishing a chain of evidence-based facts which painfully piece together a full picture of how Mr O’Sullivan came to his tragic death on or shortly before the 24th September 2013.

“The investigation further focuses on how the matter of death was handled by the DWP and its senior ministers in the aftermath of this dreadful suicide.

“The family, Sir Keir Starmer QC and I have worked tirelessly to get to the root of all that happened and this has involved working at the highest level and knocking on the most important doors in the country.

“The complaint is ongoing so it is inappropriate to comment further at this stage, but we will continue to work closely with DNS in providing progress reports.

“I would encourage other affected families to work with [DNS] on collating the evidence required to ensure those culpable are finally held to account.”

Atos was replaced by the discredited US outsourcing firm Maximus in March 2015, after it pulled out of delivering the WCA, through which it had been earning more than a hundred million pounds in most years of the contract.

Atos is still contracted to carry out personal independence payment assessments on behalf of DWP.

GMC eventually issued a warning to Dr Sherif about his fitness for practise, after finding that his WCA report was “significantly below the standard expected of a reasonably competent Disability Analyst” and that he did “not meet with the standards required of a doctor” and “risks bringing the profession into disrepute”.

Dr Sherif is still licensed to practise medicine in the UK.

Atos said it was unable to comment at this time but confirmed that it had now been in touch with the O’Sullivan family.

It has promised to speak to the family about the complaint.

The O’Sullivan family confirmed that Atos had made contact this week and that they now awaited the promised phone call.

The Conservative party failed to respond to a request for a comment.

DWP is restricted in how it can comment during the general election campaign.

But it said that it set high standards for assessment providers but did not set targets to find claimants fit for work, and that each individual was assessed on a case-by-case basis.

It said it would not be able to comment on the GMC investigation, which was an external process.

It also pointed to the five independent reviews of the WCA it had carried out [see DNS investigation] and said it had implemented the vast majority of their recommendations.

And it said that improvements to the WCA included introducing mental health training for all staff dealing directly with claimants, appointing mental health champions to advise assessors, and allowing for further evidence to be requested when considering mandatory reconsiderations.

A spokesperson for the O’Sullivan family said: “Stock answers from the DWP only serve to discredit the sincerity of their response.

“What the DWP and their ministers know is we are not going to stop until we have real answers to the very challenging questions we have put to them.

“It is time for those in command to come clean over the extremely serious issues raised within the mass of evidence presented to them.”