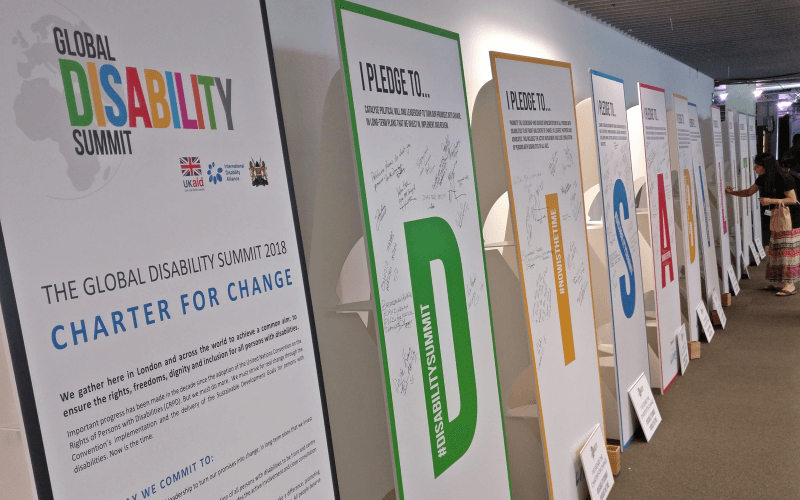 Disabled people and their organisations from the global south have called for a “new beginning” in the way that the UN disability convention is implemented and monitored.

They were speaking at the Global Disability Summit, a major international disability rights conference co-hosted by the UK government in east London this week.

Speaking at the Civil Society Forum, an event held alongside the summit to “amplify the voice and participation” of disabled people, Dr Samuel Kabue, chair of the Kenya Disability Caucus, said that ratification by countries of the UN Convention on the Rights of Persons with Disabilities (UNCRPD) by governments was not enough in itself.

Kabue, a member of the UN’s committee on the rights of persons with disabilities (CRPD), said that the participation of disabled people’s organisations was “crucial” in the implementation of the convention.

He said: “‘This summit is telling us that we need to have a new beginning where persons with disabilities are given the opportunity, the right and the capacity to work with the government in many places.”

Laura Kanushu, executive director of Legal Action for Persons with Disabilities Uganda, told the forum that taking “strategic” legal cases was “a big strategy” in creating awareness of the convention.

She said: “In implementing [UNCRPD] effectively we need [legal] precedents on different issues in our different countries.”

Another CRPD member, Gertrude Oforiwa Fefoame, from Ghana, said disabled people and their organisations “have a great contribution to give” if there is to be “full meaning” of the implementation of UNCRPD because of their “authentic experience and relevant information of the situation of persons with disabilities”.

She said disabled people and their organisations were not consulted when decisions were made on their behalf.

She said: “We have to demand accountability at all levels and ensure and demand that persons with disabilities and their organisations are actively involved in the development and implementation of legislation and policies.”

Ana Lucia Arellano, chair of the International Disability Alliance, which co-hosted the summit, said the event was “an opportunity for meaningful change”.

She said there was an “urgent” need to “move from principals to procedures, from words to action”.

More than 600 representatives of disabled people’s organisations (DPOs), charities, governments and private sector organisations who attended the forum agreed a “collaborative” statement, which calls for “measurable, ambitious and lasting commitments” to implementing UNCRPD and the UN’s 2030 Agenda for Sustainable Development.

The statement, which was presented the next day to the Global Disability Summit by Arellano, says: “It is time to implement the [UNCRPD] in every corner of the world: in every city, in every train station, in every village, in every mountain and valley, in every refugee camp and in every school.”

Among its calls is for increased investment in DPOs and support for the disability rights movement “to grow from the grassroots” and for the introduction of “CRPD compliant policies and legislation” and an increase in the “meaningful consultation and involvement” of disabled people and their organisations.

The forum and summit also saw concerns about a new 10-point Charter for Change, which laid out 10 commitments to achieve full inclusion for disabled people, with the UK government apparently its driving force.

The charter (pictured) includes pledges on inclusive education (see separate story), to promote the leadership of disabled people, to eliminate discrimination, and to “revolutionise the availability and affordability of appropriate assistive technology”.

By the end of the summit, more than 300 governments, disability organisations, international agencies and private sector companies had signed up to it.

But Simone Aspis, from The Alliance for Inclusive Education, told the Civil Society Forum: “We must all make sure that the charter we introduce at the summit does not become a substitute for proper implementation of the [UNCRPD] and a way to water down our rights and ability to hold our governments to account.”

Marsha de Cordova, Labour’s shadow minister for disabled people, said the UK was itself violating eight of the 10 commitments in the charter (see separate story).

And Sally Witcher, chief executive of Inclusion Scotland, said: “Rather than urging others to sign a Charter for Change, they might like to consider implementing UNCRPD and accept the verdict of the UN committee on their woeful performance.

“The UK government should stop lecturing to the world and start sorting out its own backyard. Its credibility on disabled people’s human rights is non-existent.”

The European Disability Forum (EDF) endorsed the charter but also warned that it could not be a “substitute” for the UN convention.

Nadia Hadad, an EDF board member, said: “We hope the outcomes of the Global Disability Summit will also provide a strong push at the national level towards full implementation of the [UNCRPD].

“This push is needed everywhere: not only in low and middle-income countries, but also in OECD countries.”

The UK government reported a string of pledges from other governments, international agencies and other organisations by the end of the Global Disability Summit.

Seven UN agencies that attended the summit committed to change the way they include disabled people in their work, including UNICEF, which pledged to help an extra 30 million disabled children gain a high-quality education by 2030 through programmes in more than 140 countries.

It was not clear, though, how many of the commitments and promises were simply policies that governments and organisations had already been planning and would have been introduced without the Global Disability Summit.