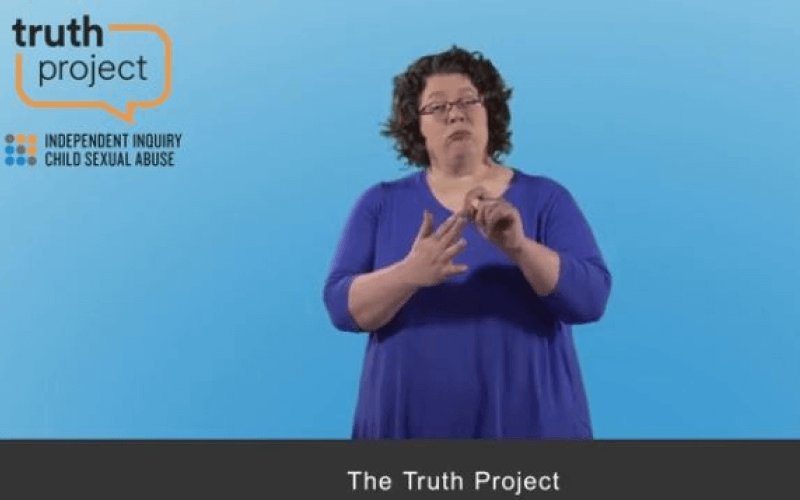 Deaf survivors of sexual abuse are being encouraged to share their childhood experiences as part of a major independent inquiry.

The Truth Project, one of the three parts of the Independent Inquiry into Child Sexual Abuse, this week launched new measures to make it easier for d/Deaf people who were sexually abused as children to come forward and tell their stories.

The project, which allows survivors to share their experiences in writing, on the telephone or in person, has announced a partnership with the charity SignHealth that will make the process more accessible to d/Deaf people.

More than 3,000 people have already taken part in the Truth Project, launched in 2015 as part of the inquiry into how institutions and organisations have failed to protect children in England and Wales from sexual abuse.

Those taking part in The Truth Project “are listened to without judgement or challenge” and their accounts will help the inquiry make its recommendations to government and other organisations on how to improve child protection across England and Wales.

The Truth Project is now partnering with the charity SignHealth, which will provide information and support for d/Deaf survivors through WhatsApp, text messages, video calls and email.

There are also BSL videos (pictured) and other information on the inquiry’s website.

Those who want to share their experiences of childhood sexual abuse can attend a free private session with Deaf facilitators at any of the inquiry’s offices, with their transport costs paid for.

Jackie Driver, SignHealth’s chair, said: “This new, confidential service offers direct communication and support in British Sign Language on a sensitive subject that can affect anyone, regardless of their background.

“As a national charity, with more than 30 years’ experience of improving the mental health of Deaf people, we know that communication barriers and a lack of Deaf awareness often prevent Deaf people from having a voice.

“Today, we break down those barriers for any Deaf adult who may have experienced sexual abuse as a child.

“Today, we enable and empower Deaf adults to come forward in a safe and supported environment to tell their Truth.”

Among those who have already come forward is Peter*, who has described how he was sexually abused by a housemaster at a boarding school for d/Deaf children.

The abuse continued for years until another boy told a member of staff what was happening, and the housemaster was arrested, convicted and jailed.

Peter told the Truth Project that he believes the school “brushed the abuse that went on under the carpet”, and he added: “They wouldn’t accept there was anything wrong and the reputation of the school was more important.”

Veronica*, who is Deaf, was placed in a children’s home run by nuns, after her father died and her mother became terminally ill.

No-one in the home could sign, and Veronica was sexually and physically abused by one of the nuns.

Many years later, seeing reports of the Jimmy Savile case caused her to experience flashbacks to her childhood, and she sought help from a psychotherapist, and then reported the abuse to the police.

Eventually they tracked down the nun who had abused her, who was by now in her 90s and insisted that she had never met or known a Deaf child, even though Veronica showed the police a picture of the two of them together. The case was closed.

Although she has now met with representatives of the Catholic diocese’s child protection unit, she was unhappy with how they treated her.

She told the Truth Project that she believes there have been clear failures by the Church, and a cover-up, and she would like someone to apologise for what was done to her and to acknowledge that it was wrong.

She particularly wants to see communication barriers removed for d/Deaf children and adults.

The chair, Professor Alexis Jay, and her panel have said they “consider it necessary to consider in some detail the residential special school sector”.

The inquiry said last year [PDF]: “Some children with special educational needs are in residential special schools for 52 weeks of the year and have little contact with their families/their community.

“Some children are unable to tell people about abuse due to sensory impairments or learning difficulties; others have behavioural problems which can obscure signs of abuse and which can act as a barrier to being believed.”

The inquiry will take evidence from 10 residential special schools across England, although it says that evidence from some of these schools “will focus on the measures they currently have in place for protecting children from child sexual abuse, including peer on peer abuse, rather than evidence of failures to protect children”.

To share your experience with the Truth Project, visit www.iicsa.org.uk/victims-and-survivors/services-deaf-users or email [email protected]