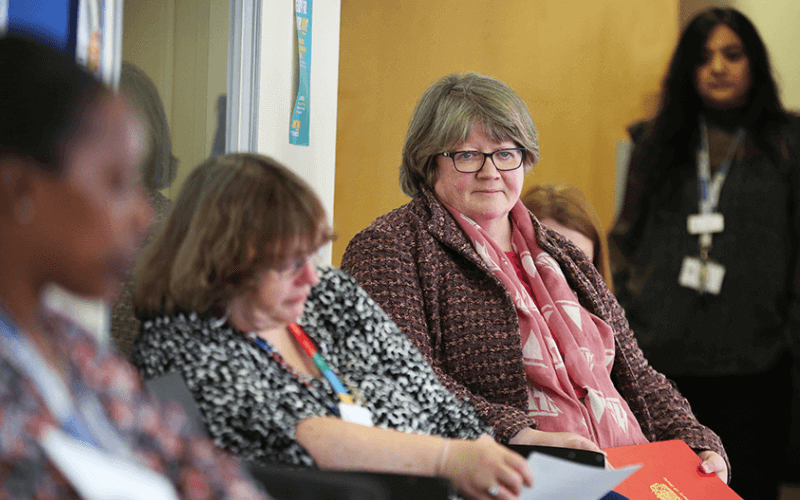 A high court judge has accused work and pensions secretary Therese Coffey of “wholly unsatisfactory” behaviour and lacking respect for the mother of a benefit claimant whose death was linked to failures by her department.

Mr Justice Morris spoke out about Coffey’s actions as he criticised her for deciding “at the 11th hour” that she wanted the Department for Work and Pensions (DWP) to be allowed to provide evidence at a high court hearing next week.

That hearing will decide whether there will be a second inquest into the death of Jodey Whiting, a disabled woman who took her own life after her benefits were wrongly stopped.

DWP’s 11th hour decision to take part meant further stress and distress for her mother, Joy Dove, from Stockton-on-Tees, who has fought for justice for her daughter for more than four years, and who was left on the verge of tears during Friday’s hearing.

But she told Disability News Service this week that Coffey’s behaviour had only made her more determined to continue the battle to ensure the full truth of what happened to her daughter emerged.

She said: “I will just keep fighting and fighting.”

But she also said that Coffey’s lack of respect and understanding of her distress, and that of her family, illustrated the culture of disrespect for disabled benefit claimants and their relatives within DWP over the last decade.

DWP was informed about the family’s legal proceedings last December, and other than indicating the following month that it had not yet “taken a position” on the case, Coffey (pictured) took no further action until last month, when she found out the case was due to be heard on 22 June.

She then decided that DWP wanted to make legal submissions to the 22 June hearing.

The judge said Coffey’s behaviour in leaving it until the “11th hour” to participate in the case – and to provide no explanation for her delay – was “inimical” to the court, a word which means unfavourable, unfriendly, or even hostile.

He said: “There has been a wholesale failure to comply with the letter or spirit of procedural requirements.”

Although DWP had expressed regret at any distress caused to Dove, the judge said Coffey’s conduct was “lacking in respect and understanding”, while its expression of regret “falls somewhat short of an apology”.

Merry Varney, a partner at the law firm Leigh Day, which is representing Dove, said the way that she and her family had been treated by DWP was “an absolute disgrace” and showed “no proper understanding of the impact on Joy”.

She said it was “astounding” to hear such strong words directed at a secretary of state by a judge.

Varney said Coffey’s behaviour was “completely illustrative of the culture of the DWP that we have heard many individuals and bereaved families describe – lacking in respect, understanding and no apology”.

She said Dove had now been caused “significant additional and wholly avoidable distress” as well as extra expense and inconvenience.

The judge ruled that DWP would only be allowed to make written submissions to next week’s hearing, and only on one of the three points on which it had requested to present to the court.

But that decision means that the hearing will still now run over one-and-a-half days, instead of just one, causing expensive and stressful last-minute alterations to the family’s arrangements.

Dove said: “I am appalled by the behaviour of the DWP.

“I believe they caused my daughter’s death by their callous disregard for the anguish they caused her and now, with the same abominable attitude towards ordinary people, they are causing me more distress.”

The first inquest into her daughter’s death, which took place in May 2017, lasted just 37 minutes.

The coroner had turned down Dove’s request to examine the actions of DWP.

Now she wants the high court to quash the results of that first inquest and order a second one by a different coroner.

Whiting, a mother-of-nine and grandmother, took her own life in February 2017, 15 days after she had her employment and support allowance mistakenly stopped for missing a work capability assessment.

The Independent Case Examiner concluded in 2019 that DWP was guilty of “multiple” and “significant” failings in handling her case, and that it had failed five times to follow its own safeguarding rules in the weeks leading to her suicide.

A DWP spokesperson said: “Our condolences are with Ms Whiting’s family. It would not be appropriate for us to comment further.”