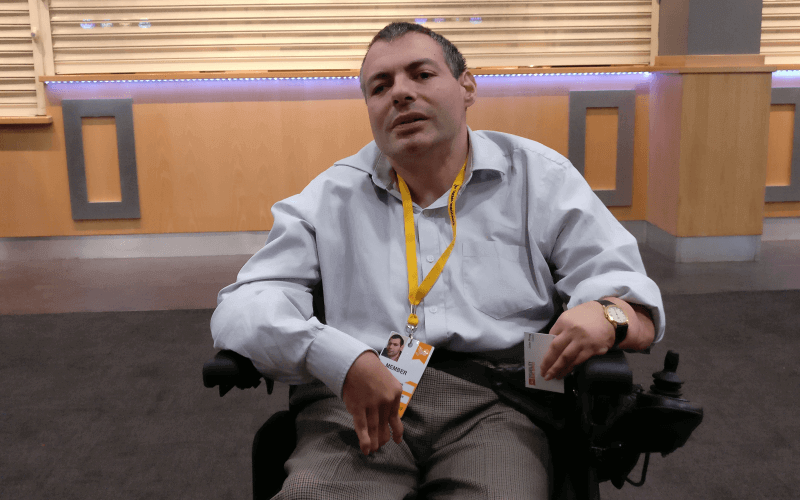 The Liberal Democrats have admitted that they probably “overlooked” the need for a detailed policy on the care and support needs of working-age disabled people.

The admission to Disability News Service (DNS) by the party’s health spokesperson in the Lords, Baroness Jolly, came after party members criticised its new NHS and social care policy paper for ignoring those needs.

It says the party in government would raise an extra £6 billion to boost spending on social care, public health and mental health.

There is also a promise to set a new national target to reduce the gap in life expectancy between people with and without learning difficulties by one year every year.

And there is the promise of a more “ambitious” target for reducing the number of people with learning difficulties forced into assessment and treatment centres.

But despite the spending pledge and a mention of the “postcode lottery” in care, there is no discussion of how the party in government would address the support needs of working-age disabled people.

The failure comes at a time when backing for a new National Independent Living Support Service (NILSS) – proposed by the Reclaiming Our Futures Alliance (ROFA) of disabled people’s grassroots groups – is gaining momentum.

A NILSS would see a legal right to independent living, with support provided free at the point of need, funded by general taxation, managed by central government, and delivered locally in co-production with disabled people.

Baroness Jolly, who chairs the learning difficulties charity HfT, told the party’s annual conference in Bournemouth this week that the only way to secure the future of social care was through setting up a cross-party commission on health and social care.

This, according to the policy paper, would aim to set a “realistic” long-term funding settlement for the NHS and social care, and introduce a dedicated health and social care tax to fund it.

But there was frustration among members who spoke in the debate at the lack of a proper social care policy, with detail about how a Liberal Democrat government would reform adult social care.

Cllr June Greenwell, a Liberal Democrat member of Lancaster City Council, told the conference that she could not endorse the “deeply disappointing” policy paper because social care services were discussed “almost entirely, indeed entirely, through the prism of their effect on the NHS”.

Greenwell said the party had failed to offer “a vision, an ambition to radically improve access to social care services”.

The party’s candidate to fight the North Warwickshire seat at the next general election, Richard Whelan, who himself has a council-funded support package, said the motion “does not go far enough”.

He told members debating the new policy paper: “For someone like me, we need more than just the basic care needs, we need personal assistance.

“We need help to live an independent life. Allowing me to get here today to speak to you… involves not just the care in the home, it involves help outside the home, but it also involves help with getting educational qualifications and getting into work.

“All these things go beyond the remit of this motion and this paper.”

He called for the party to set up a working group to discuss the issue, and to bring it back to conference next year “so that disabled people can live an independent life”.

But Whelan (pictured) told DNS after the debate: “It’s frustrating to me that all they have talked about is linking health and social care and care workers.”

He said the party did not seem to have a policy on the support needs of working-age disabled people.

Whelan appeared to support the NILSS idea, and a legal right to independent living, as proposed by ROFA.

He said he was pushing the party to set up a working group to report back with a motion on independent living at next year’s conference, and he added: “We have to do it properly.”

Baroness Jolly told DNS that the issue of the support needs of working-age disabled people was probably “overlooked rather than ignored” by the policy paper and the motion.

She blamed the party’s lack of resources to fund detailed policy work, caused she said by its performance at the last general election, which led to a lower level of funding for its parliamentary work.

She said: “We are a very under-resourced party.”

She said her message to working-age disabled people was: “Lib Dems look forward to the next general election where we would hope to increase the number of Lib Dem MPs which would then give us the capacity to expand our policy base.”

But she said she would also speak to senior people in the party and “ask them to plug the gap in today’s paper and today’s motion”.

Although the health and social care policy paper offered little to address the issue, another paper, on social security, poverty and access to services and skills, said the party wanted to reintroduce “a form of” the Independent Living Fund, which was closed by the Tory government in June 2015.

The social security paper, which has also now become party policy after being approved by members at the conference (see separate story), said a Liberal Democrat government would “reinstate a form of the Independent Living Fund to help people who need it to live independently in their community”.

But it also said it would “increase the role of local authorities in administering the support to ensure that it is properly responsive to local needs”, which could clash with calls for a NILSS.

The idea of a return of a form of ILF was not mentioned in either motion debated by the conference this week.