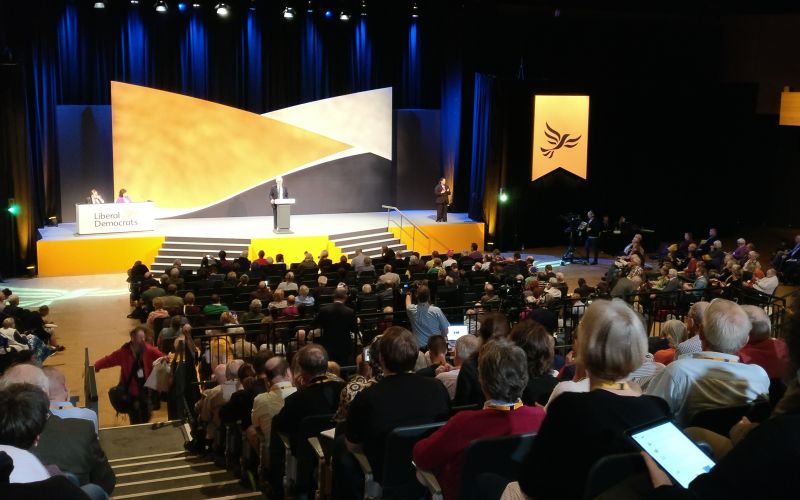 The Liberal Democrats have voted to incorporate the UN disability convention into UK law.

Party members overwhelmingly passed an emergency motion that noted how the UK government was accused last month by a UN committee of causing a “human catastrophe” by cutting disabled people’s support.

David Buxton, the Deaf party activist who proposed the motion, said the government’s response to the UN committee’s concerns was to be “scathingly dismissive” of a report that produced more than 80 recommendations for improvements on how it implements the UN Convention on the Rights of Persons with Disabilities.

He said: “It cannot be allowed to continue to shirk its responsibilities.”

Stephen Lloyd, the disabled MP who speaks for the party on work and pensions, told the conference that it was “an absolute disgrace” that the UN’s committee on the rights of persons with disabilities had had to write such a critical report on the UK government’s progress in implementing the UN convention.

He said: “It is shameful that a UK government… could be written of in such a way.

“It shows how utterly appalling this government is on disability.”

Although the party’s disabled president, Baroness [Sal] Brinton, had told Disability News Service before this year’s general election that the party would incorporate the UN convention into UK law, it was not in the Liberal Democrat election manifesto.

Such a move would give disabled people legally-enforceable rights to independent living, accessibility, an adequate standard of living, and many other areas covered by the convention.

Baroness Brinton told the conference on Tuesday that the promise would be carried out by strengthening the Equality Act 2010.

She said the government’s response to last year’s report from the House of Lords Equality Act 2010 and disability committee – which made 55 recommendations for strengthening the act – had been “woeful”.

She also highlighted how some disabled people had been driven to take their own lives by the discrimination they had faced in the benefits assessment process.

Baroness Brinton said she had shared on social media two of her many experiences of discrimination as a wheelchair-user on London buses, but she said this was nothing compared to the experiences of other disabled bus-users, particularly outside London.

She said the government’s continued failure to respond to Doug Paulley’s Supreme Court victory in January – when the court found First Bus had breached its duty to make reasonable adjustments for disabled people through its  policy on the use of wheelchair spaces – had been “appalling”.

She called on fellow members to “shame” the government into “helping disabled people to live the lives they are entitled to” by voting for the motion.

Buxton, who founded the Liberal Democrat Disability Association 25 years ago, said the government’s response to the recommendations from the Equality Act 2010 and disability committee had been to “sweep them under the carpet”.

But he warned the conference that many people had not forgotten the party’s role in backing coalition policies such as the bedroom tax and cuts to disabled people’s support between 2010 and 2015.

He said: “When in government the Liberal Democrats did block some of the Conservative… funding cuts but unfortunately voters have not realised the efforts and successes that we made in these matters.

“It was only after the 2015 general election that the voters began to see the true colours of the destructive steam-roller that is the Conservative government when they made public their intentions to further cut funding for disabled people.”

The disabled Liberal Democrat peer Baroness [Celia] Thomas said the government had been shown as “heartless at best and cruel at worst”.

She pointed to cuts to housing benefit, the disability benefits personal independence payment and employment and support allowance, social care, and Access to Work, and to the failure to re-open the Access to Elected Office Fund.

Evan Mortimer, a non-binary, disabled party activist, told the debate: “Too many disabled people are suffering, but all too often they get ignored, or worse, accused of being scroungers.

“It is that false narrative, pushed over many years by many parts of the media and far too many politicians, that allows the government, the private companies they employ, and parts of the public sector to treat disabled people so appallingly.

“In many ways, what the government is doing is a reflection of society’s indifference to disabled people.

“Society has many problems but the government should be challenging those and not reinforcing them and making things worse.”

Meanwhile, the chair of the Equality and Human Rights Commission was due to warn today (Thursday) that the UK’s reputation as a champion of human rights was now “seriously under threat”, following the government’s response to another UN examination.

David Isaac was set to speak out as the UK government faced a five-yearly review of its overall record on human rights.

In May, the UK received 227 recommendations from the UN on how it should improve its human rights record, but it accepted just 96 of them (42 per cent).

The British Institute of Human Rights and other civil society organisations, including Disability Rights UK, also expressed disappointment, and said the UK’s figure was far lower than 67 per cent, the average proportion of recommendations accepted by other countries in the UK’s region (the Western European and others UN group).

They said they were worried about “the regressive climate for human rights in our country”.

Ben Donaldson, head of campaigns at the United Nations Association – UK, said: “Championing human rights should be a core part of the UK’s vision for a global Britain.

“Instead, the UK is falling behind the international community and is resorting to dismissive rhetoric.

“This conduct directly undermines the rules-based system and harms the UK’s national interest.”

Picture: Liberal Democrats at their annual conference in Bournemouth